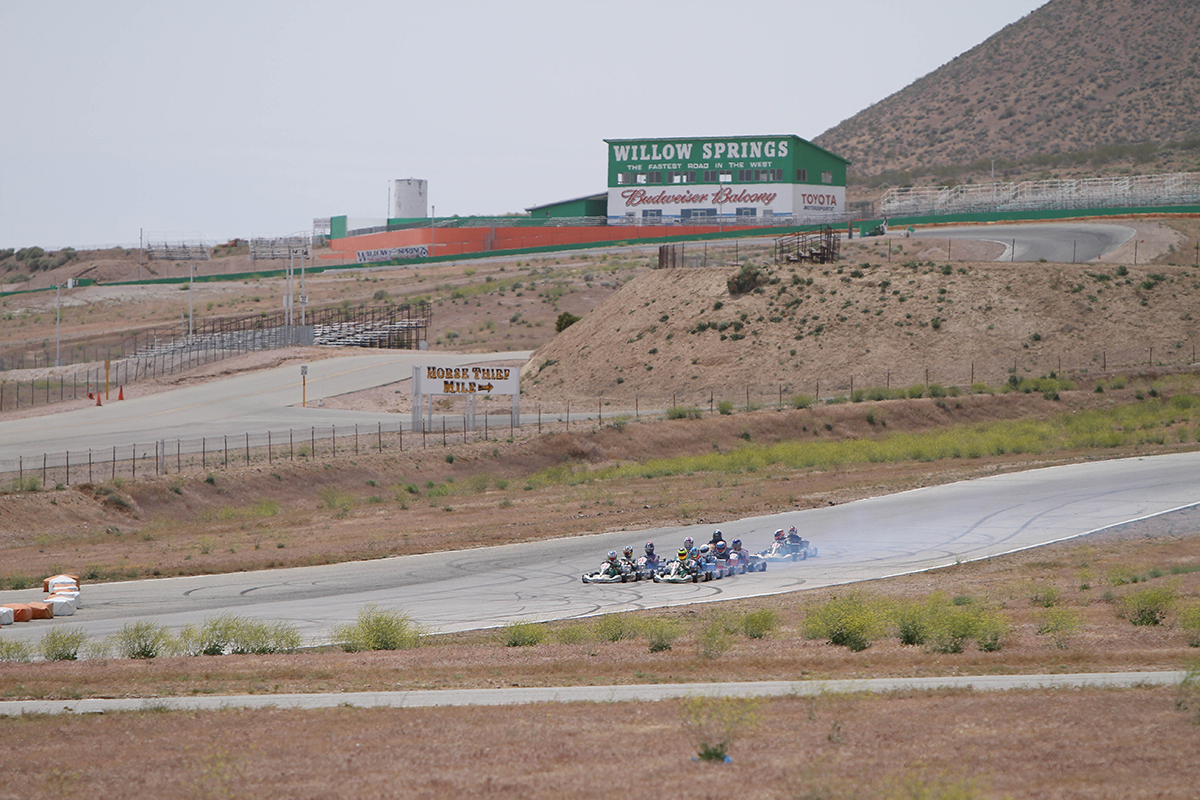 The California ProKart Challenge returns to the Streets of Willow circuit for the first time since 2011 (Photo: DromoPhotos.com)

The California ProKart Challenge is set to return back to action, resuming the 2017 championship chase with the second round of the series at the Willow Springs International Raceway on March 31-April 1. There is no ‘fooling’ around with the second stop, which takes the competitors in the Honda and IAME divisions around the exciting and fast Streets of Willow road course – the largest track Superkarts! USA competitors will race on this season.

There is no other course like the Streets of Willow circuit. It’s a mix of high speed corners, long straights and challenging sections, and many of the California PKC regulars have never been on this section of the facility. The last time the series hosted a race on the Streets course was back in 2011.

SKUSA CEO and California ProKart Challenge founder Tom Kutscher put it this way; “This is the best track out there! We’ve been trying to get back to it for 6 years. Thank you to Mike Manning for helping make it happen. If I have the chance next weekend, I’m going to run it myself!”

Senior/Master drivers will take on the 1.6-mile layout, with Junior/Swift classes negotiating the shortened 1.1-mile course. Both feature the 1000-foot straightaway and climb up the Willow hill, climbing and descending well over 100 feet of elevation.

The added challenge of the Streets of Willow course is sure to amp up the championship chases, with this second of six events counting towards the 2017 California PKC season’s total points. Defending California ProKart Challenge champions Billy Musgrave and Nicky Hays kicked off the new year with victories at Buttonwillow to open up the 2017 championship chase. Musgrave held off Vemme Kart S1 Pro Stock Honda rookies Hunter Pickett and Hunter Kelly for the race win in February. Hays came out the victor in the Formula Works/CompKart X30 Senior battle, beating out veterans Brenden Baker and Stepanova Nekeel.

The Mad Old Nut/Mad Croc USA S2 Semi-Pro Stock Honda class saw many of last year’s top contenders graduating up to the S1 division for 2017, leaving the door open for others to step up this season. Former race winner Kyle Wick paced the field to the checkered flag at Buttonwillow, but it is Jason Pettit who leads the championship chase. Pettit scored the most points over the opening round, five more than third-place finisher Aaron Aguirre with Wick holding third in the standings.

A record 18 drivers took part at the opening event in the Nash Motorsportz S3 Novice Stock Honda category, bringing in a new class of drivers into shifterkart action. Anthony Fontana dominated the racing action, winning both heat races and the main event to come out as the championship leader. Alieja White and Evan Jonker completed the podium and are the top challengers in the point standings heading into Willow Springs.

Nick de Graaf finally got the monkey off his back with his first victory in the Phil Giebler Racing X30 Master class. Qualifying was the only session de Graaf did not end on top, with Master rookie Jess Peterson earning fast time, and is currently second in the standings ahead of Luke Vasquez. Robert Marks nearly swept the Mike Manning Karting S4 Master Stock Honda division in Buttonwillow, slipping back to third in the main event. Marks leads the standings by five points ahead of race winner Alan Michel, with runner-up finisher Rob Logan sitting 25 points back in third. The Musgrave Racing Company S4 Super Master Stock Honda category continues to grow, featuring 15 pilots at the season opener. John Crow led the racing action, scoring his first victory in the class, ahead of PP Mastro and Jonathon Allen.

Trey Brown showed strength and tolerance for pain, jumping into a kart just one month after breaking his collar bone in a non-karting incident. Brown won the racing action in Buttonwillow for the Ryan Perry Motorsport X30 Junior division, leading the championship heading into Willow Springs over Dominic Gorden and Tomas Mejia. Jacopo Pizzinato was the lone competitor in the Rolison Performance Group S5 Junior Stock Honda category and looking for more competition as the season heats up.

Buttonwillow was a solid rookie debut for last year’s Micro Swift Kai Sorensen in Outsource Utility Contractor Corporation Mini Swift. Sorensen won both heat races and the main event in his first class start to lead in the championship points. Daniel Inzunza and Jonathon Portz finished second and third, holding the same positions in the current standings. The PKS Kart Supplies Micro Swift division went to Stephen Eisert, earning his first victory in the class that featured 17 drivers. Enzo Deligny and Logan Toke are the top challengers in the standings heading into Willow Springs.

Registration remains open for the second round of the California ProKart Challenge with the deadline for online registration for the event set for Monday, March 27 at midnight – with the discounted price of $325 for entry and stamped race tires. Move-in for Round Two of the California PKC begins on Thursday morning, March 30, with ‘early-bird’ registration check-in and pre-tech at the track offered from 3pm to 6pm. On Friday, the California PKC registration desk opens at 6:30am, with the official practice day beginning on track at 9:00am – following a mandatory drivers’ meeting – with practice sessions running until 5:00pm. There is a nominal fee of $40 for a reserved pit spot and $50 for overnight camping in the pits (as a flat fee for up to 3 total nights, $100 for RVs). Willow Springs requires all attendees to purchase a $10 gate fee at the front entrance, but that’s all spectators have to pay for this event. Mechanics and crew members that want access to the Hot Pit area of the track need to purchase California PKC pit passes in addition to paying the Willow Springs gate fee. Complete race and venue information, along with a tentative weekend schedule and host hotel information, can be found at the California PKC Event Page.

Willow Springs International Raceway is hosting a test and tune day on Friday, March 24 from 8am to 5pm, running the same configurations and direction as the California ProKart Challenge event. The fee is $100 plus a Universal Membership ($75). Contact Willow Springs at 661-256-6666 for additional info.