Tuto Super One Series Round 1 Report 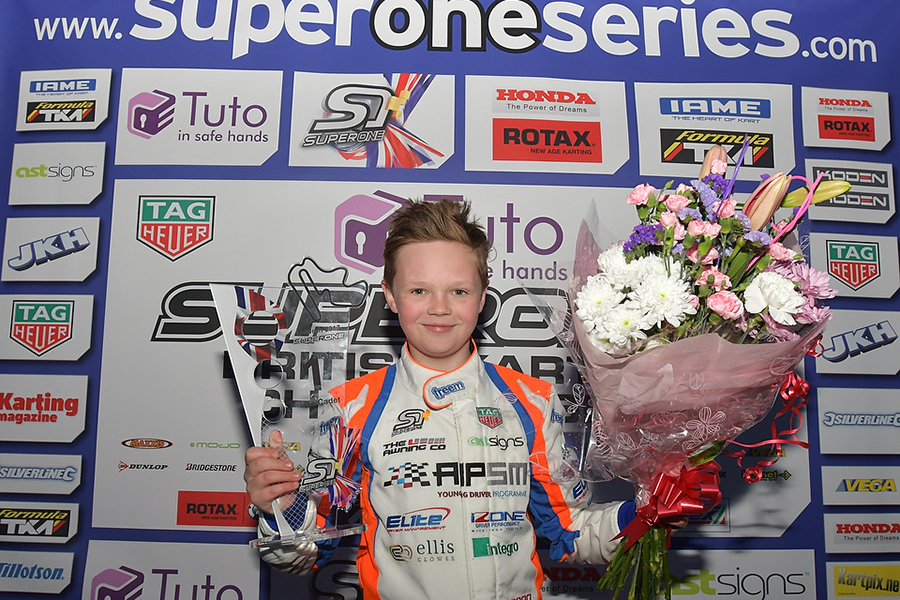 The first round of the 2017 series for IAME Cadets, TKM, X30 and Rotax classes didn’t see a single period of dry running, and with no action until midday on Sunday due to the torrential rain the organisers at Rowrah did incredibly well to get through the entire programme.

Taylor Barnard qualified on pole 0.15s ahead of Coskun Irfan then Barnard, Freddie Slater and Alexander Dunne took a heat apiece, with Barnard and Slater ending up equal on points and Barnard taking pole for Final 1 by virtue of his higher qualifying position. In Final 1 Slater got the best start before Barnard took back the lead, with Slater staying on Barnard’s tail throughout. Slater briefly took the lead on lap 7, before tucking back into position, then in the traditional last lap tussle he ended up 4th and Matthew Rees took 2nd ahead of Arvid Lindblad. Barnard dominated the second Final, over a second ahead throughout, with Maxwell Dodds gradually pulling away from Oliver Denny and the pack behind him too. The highest climber was Josh Rowledge who came through the Repechage to 14th in Final 1 then 8th in Final 2. 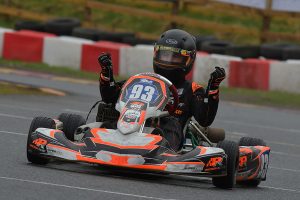 Kurt Roberts took pole out of the 30 Junior TKMs half a second ahead of James Pashley with Ross Deal a tenth behind that. However, Roberts came off at the start of the first heat, dropping to the back but persevering to finish in 20th. Theo Hesketh won the second heat with Roberts 2nd, and Hesketh had pole from Pashley and Deal. The first Final soon settled down to Hesketh, Pashley and Deal, but Final 2 was a great race with Robert Welham taking the lead on lap 3 and Roberts coming back up to 2nd before Abbi Pulling reeled him to take 2nd on the last lap while Hesketh eventually finished 8th. 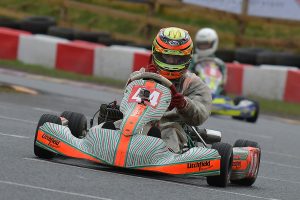 John Hogan qualified just a hundredth ahead of Stephen Letts, but Letts won both of his heats with the other heat win going to Kyle Sproat whose first heat hadn’t gone well. Hogan had a 2nd and an exclusion so was well down the order. Letts led all the way in Final 1 with Ryan Edwards 2nd but dropping back and Vercoe 3rd. It was the same order in Final 2 but Letts took a bit longer to get going and Edwards led briefly with Vercoe also passing Letts, but Letts was soon back in the lead to go on to win by 1.18s. Hogan meanwhile won the Repechage and came through to 13th in Final 1 and 9th in Final 2. 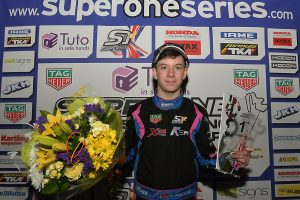 Jonny Wilkinson headed Timed Qualifying from Max Jeanne and Sean Butcher, with Louie Westover down in 11th. Wilkinson took two heat wins with the others going to Dragan Pinsent and Jeanne, but Jeanne had an exclusion in another heat so had to go through the Repechage where he didn’t qualify. Wilkinson was on pole from Samuel White then Butcher, with Westover now up to 4th. White and Westover leapfrogged ahead of Wilkinson at the start of Final 1 then Westover took the lead on lap 3 and went on to win. Wilkinson lost 3rd to Butcher then got it back, but along with no less than 13 others received a bumper penalty which dropped him to 7th and gave Butcher 3rd. Westover also won Final 2, pulling further and further away from White initially 2nd and then Butcher who overtook him. But Butcher was demoted from 2nd with a bumper penalty and as Reggie Duhy and Morgan Porter had passed White they completed the podium. 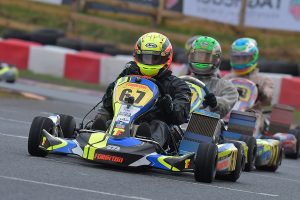 Elliot Harvey was the fastest of the 61-kart field in Timed Qualifying followed by Josh Skelton, James Johnson and Danny Keirle who were within a tenth. Skelton (twice), Harvey and Keirle shared the heat wins with Skelton on pole, while Charlie Lamb won the Repechage which contained some highly reputed drivers. Skelton led Final 1 until half-distance when Keirle made his move with Harvey following him through. Oliver Hodgson hadn’t finished the first Final due to mechanical woes but gained 18 places in the second Final to finish 14th. 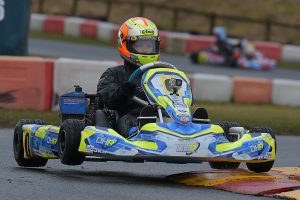 Newly-crowned O Plate winner Alex Lloyd took pole, going on to win both heats with Kai Hunter 2nd in both heats and Sam Heading 3rd. Lloyd won both Finals by several seconds, both followed by Hunter, with Heading 3rd in the first Final and Dominic Bush 3rd in the second Final but penalised for his bumper, giving the remaining podium place to Lewis Gilbert. 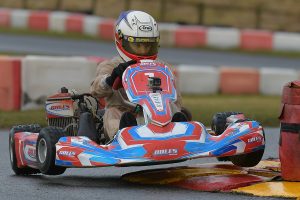 Bradley Barrett took pole in Timed Qualifying followed by Tommy Foster 2nd and Jason Lockwood 3rd, with the times very close considering the conditions. Foster and Barrett took a heat each with Barrett taking pole for Final 1 due to his better qualifying performance. Barrett crossed the line first in the first Final by quite a distance but was demoted to 4th with a bumper penalty, giving the win to Tyler Chesterton from Clayton Ravenscroft and Rhys Hunter. In Final 2 Chesterton kept the lead at the start but Ravenscroft came off on the first lap and Barrett was soon up to 2nd although he didn’t manage to close the gap to Chesterton. Hunter took 3rd but again couldn’t close up to Barrett.