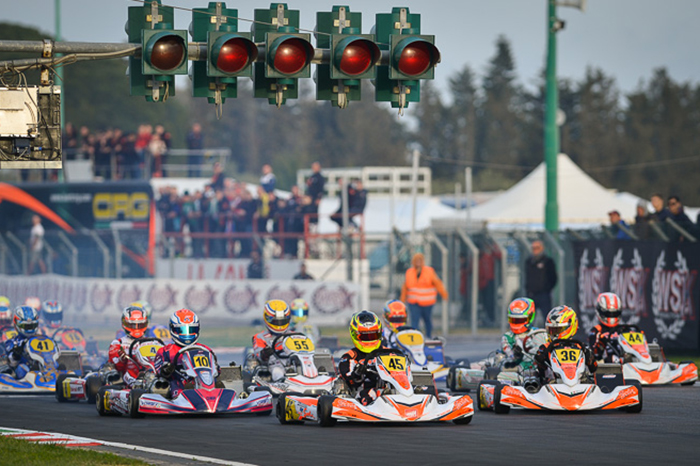 The French chassis continues increase morale by completing outstanding performances at the highest level of international karting. Undoubted leaders of KZ2 since the start of the 2017 season, the Sodi drivers proved this weekend at La Conca that they could also count on the equipment in situations with strong grip. The 2nd place for Bas Lammers and the prowess of his teammates confirm, once again, the good form of Sodikart and the Sodi chassis in competition.

After the excellent results recorded at the start of the season, Sodikart encountered a new challenge at the third round of the WSK Super Master Series. With the rise of temperatures and the unique surface at La Conca, the meeting was set to be strongly influenced by the grip. The free practice times and the pole position of Bas Lammers (setting the record of the event) reassured the Sodi Racing Team of its ability to adapt to a strong grip at the outset, especially as Alex Irlando (CPB Sport) was already 4th in Qualifying. Anthony Abbasse unfortunately could not complete this thundering start due to a driver blocking him on his fast lap.

The progress of the qualifying heats confirmed the situation. Lammers was still swift and Irlando proved to be able to win against the best KZ drivers with a fastest lap in the race. During this time, Abbasse was pushing to move up while making sure not to wear out his tyres. The battle proved very tough in the Prefinals, but Lammers and Irlando were again credited with the fastest laps.

The Final allowed Lammers to use the full potential of his equipment to regain no less than five places and finish on the second step of the podium. Irlando returned to the top five with an exceptional time just 5 thousandths off the fastest lap. Tom Leuillet (CPB Sport) finished a superb weekend in an impressive 6th position and Sodikart could be pleased with a formidable overall result with four Sodi drivers in the top seven. Mechanically, the partnership with the TM Racing factory continues to bear fruit during racing.

Bas Lammers thus confirmed his position as leader of the championship while Anthony Abbasse is still in 2nd place. The enthusiastic results of young Alex Irlando and Tom Leuillet (ranked 8th and 11th in the championship) predict good results for the next races and the season’s championships.

Meet on April 6th at Sarno for the conclusion of the WSK Super Master Series, with the main objective of winning the championship.