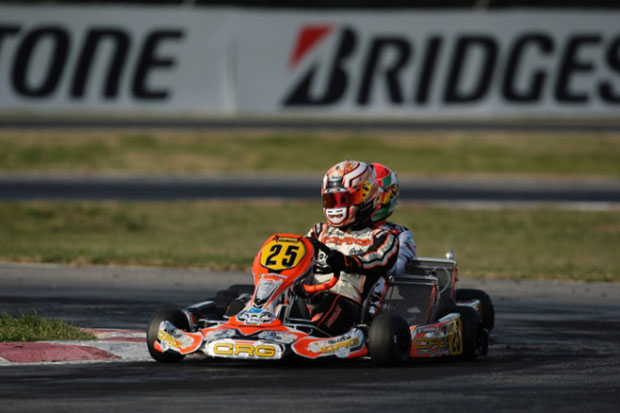 A series of unlucky episodes and some incidents prevented CRG drivers to get on the podium in the third round of the WSK Super Master Series at the International Circuit La Conca on March 19th. Spina 1st in 60 Mini but then penalized.

A series of unlucky events stripped CRG drivers from the podium in the third round of WSK in La Conca. In KZ, Flavio Camponeschi ended his race in eighth place leading Jorrit Pex. An incident in OK’s Prefinal took the Norwegian polesitter Dennis Hauger off. The Brazilian Gabriel Bortoleto best of OK-Junior in sixth place. Alfio Spina crossed the finish line of 60 Mini on top, but was later on issued a penalty.

Flavio Camponeschi turned out to be the best of CRG drivers in the Final of KZ on CRG-Tm. He was eighth proceeding Jorrit Pex, as the latter had been protagonist in qualifying and in Prefinal B where he clinched the third place, but could not give his best in the Final. The Dutch driver of CRG Holland  Benjamin Tornqvist Persson recovered well up to the 13th place leading the Finn Simo Puhakka, who in turn had run a great Final B ending sixth. Stan Pex and Taymour Kermanshahchi retired early from the Final. Alessandro Giardelli could not find his place among the finalists due to a retirement in Prefinal A. Paolo De Conto did not take part in this race due to a snowboarding incident in the days before the round of La Conca.

HAUGER MISSING OUT ON THE FINAL IN OK

Dennis Hauger had to unexpectedly retire from Prefinal B of OK due to an incident at lap one. This did not allow him to take part in the Final, stripping the race from one of the certain protagonists of the category, as the Norwegian had set the pole position and won one heat. In the Final, Meyer, who was sixth in Prefinal B ahead of Davide Lombardo, lost some ground and had to settle for P16. Lombardo lost even more ground and closed his effort in P24, while Bradshaw had to retire at lap one after the eight place he secured in Prefinal A.

BORTOLETO THE BEST OF CRG’S LOT IN OK-JUNIOR

The Dutch Kas Haverkort of team CRG Keijzer has been one of the quickest drivers throughout weekend in OK-Junior and confirmed his speed with the victory of Prefinal A. Unfortunately, the Dutch driver started the Final from the outside lane and was involved in an incident at the first lap. The Brazilian  Gabriel Bortoleto put in a great race instead, and clinched a sixth place in Prefinal and confirmed it in the Final, at the end of a nice run. The Spanish driver Ayrton Fontecha was 12th, the German Marius Zug of RL-Competition was 13th, the Spaniard Jose Antonio Gomez 18th and the Malaysian Nik Zamir Zakwan 21st. The two French drivers Gillian Henrion and Evann Mallet had an unlucky weekend instead and had to retire from the Prefinal, therefore not qualifying for the Final.

ALFIO SPINA STRIPPED OF THE VICTORY IN 60 MINI

The most spectacular Final of the weekend was unquestionably 60 Mini’s. The race was tight from lights to flag and team Gamoto’s Alfio Spina crossed the line on top, recovering all the positions from the starting P5. Spina managed to get the lead of the race in the closing stages and kept it all the way to the flag, crossing the line leading Minì and the Norwegian team mate at Gamoto Martinius Stenshorne. At the end of the race, a penalty surprisingly hit Spina and relegated him out of the podium. The motivation for this stewards’ decision is the partial detachment of the front fairing, a measure that once again has penalized spectacle on track. The victory was therefore inherited by Minì and the second place by Stenshorne. The other team Gamoto’s driver Luca Giardelli ended within the top ten in sixth place, while the South African Saood Variawa of CRG Holland was ninth. Spina was relegated to P12 leading the Russian driver of Gamoto Miron Pingasov.

The fourth and closing round of the WSK Super Master Series will take place next April 9th at the International Circuit Napoli of Sarno (Salerno).