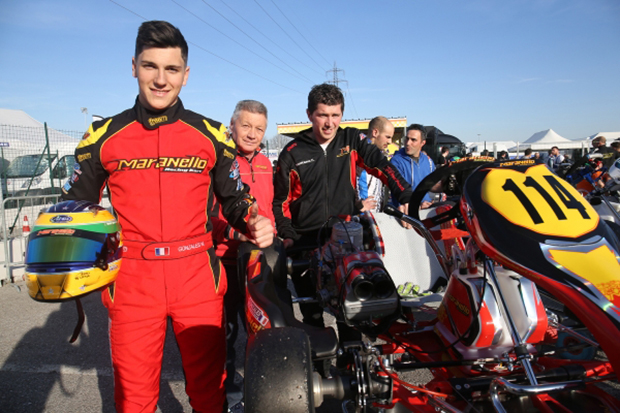 Maranello Kart’s drivers pulled great results in Lonato at the closing round of the Spring Trophy. Alongside the KZ2 Trophy won by Gonzales, Andrea Tonoli won KZ3 Over’s and Lukas Aberer OK-Junior’s.

The spectacular triumphant run of Maranello Kart continued also in the closing round of the Spring Trophy in Lonato, as Nicolas Gonzales has been excellent protagonist of the double round held on February 26th and March 12th in KZ2, taking the Italian outfit to the victory at South Garda Karting.

Maranello Kart has obtained great results in the closing round of the Spring Trophy not only in the shifter category, where Massimo Dante, Marco Pastacaldi, Flavio Sani, Christoph Hold and Marco Vannini have been shining alongside Nicolas Gonzales, but also in the other categories on track in Lonato. The final haul comprises the Trophy won by Gonzales, the third place in the final classification secured by Dante, KZ3 Junior victory of Marco Miastkowski, the Trophy won by Andrea Tonoli in KZ3 Over and that of Lukas Aberer in OK-Junior.

Nicolas Gonzales has been victorious once again in KZ2 on Maranello-Tm. He started the weekend on a high posting a spectacular pole position in 45.903s, and kept his momentum dominating the final, after getting some positions back. The Austrian driver Christoph Hold also put in a great race. He has been among the quickest throughout the weekend and closed his effort in ninth place, after starting from the second row. Three time winner of the Trophy Massimo Dante has also been shining but was forced to the back foot by an incident in a heat. In the Final,  Dante climbed up to P12 from the starting P23, which confirmed his speed. Marco Pastacaldi has also completed a good weekend, ending 13th at the end of several good duels. Marco Vannini closed his effort with a good P18, while Flavio Sani was 21st due to some contacts and an incident in one heat.

Marco Miastkowski took the victory in KZ3 Junior recovering from P5. This result allowed him to end the Trophy in third place. Mattia Giannini was also on the top ten of the race in P8. Roberto Cesari secured the pole position and started the final from the front row, but unfortunately he had an incident during lap one.

Andrea Tonoli managed to clinch the KZ3 Over Trophy at his debut on Maranello-Tm, despite an incident in Prefinal seemed to have compromised a weekend started on a high with the pole position. The Italian driver managed to recoup greatly all the way to the second place, which made him finish equal on points to Profico, but Tonoli had the best discriminant of the qualifying time. Great results in KZ3 Over were also obtained by the other Maranello Kart’s drivers:  Attilio Borghi was third, Fabio Danti fourth, Ferruccio Alacqua sixth, Gianni Corti eighth, Diego De Palma 12th and was followed by Patrick Thur and Nicola Rizzo. Cristian Griggio had to retire from the Prefinal and Final instead.

In KZ3 Under Maranello Kart’s Michael Dalle Stelle went on the podium of the Final in P3. This result earned him the fourth place in the final classification of the Trophy.

In KZ4 (former 125 Club) Giancarlo Cressoni was the best of Maranello Kart’s drivers in fourth place, while Maurizio Giberti had to retire after being second in qualifying.

The Austrian Lukas Aberer ended the OK-Junior Final in fourth place on Maranello-Tm. This result granted him the victory of the Spring Trophy though.

The competitiveness of Maranello drivers has been great also in the crowded 60 Mini. The Austrian  Lucas Zbul has been shining in P13, while his fellow-countryman Kiano Blum was fourth absolute in qualifying and ended the Final in 11th place, but a 5s time penalty relegated him to P16. Blum ended fifth in the final classification of the Trophy, while Zbul was sixth.

Maranello Kart’s General Manager Luca Iannaccone commented the race in this way: ”We were proud to see a lot of Maranello chassis on track, especially on a circuit like Lonato that is our home and reference track. Performance has been high in all categories, but despite the positive results, we were extremely happy on the high number of drivers wearing Maranello Kart’s colors. I believe that Nicolas Gonzales’ victory in KZ2 is the first of a long series of great results. I believe we might have found a good heir of Tommaso Mosca.”

The next appointment on track for Maranello Kart will be the 28th Andrea Margutti Trophy scheduled for next March 26th in Lonato.