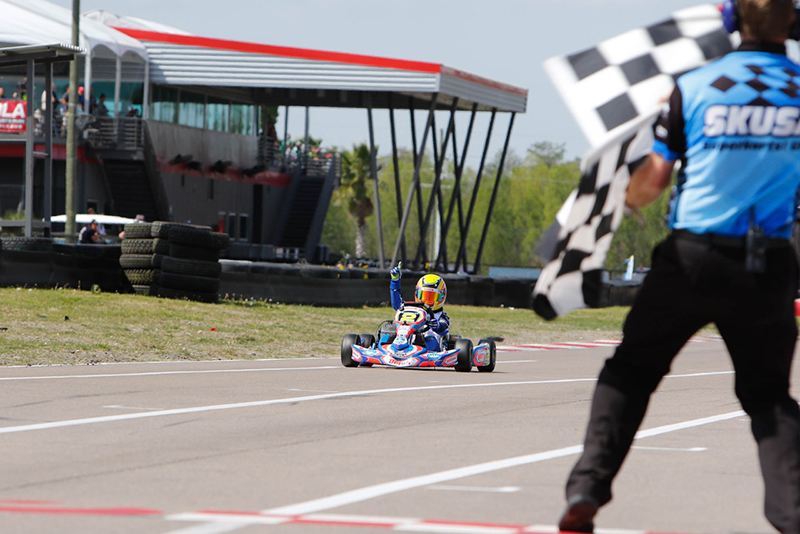 BENIK comes home from the SuperKarts! USA (SKUSA) WinterNationals at NOLA Motorsports Park with a win and seven podium finishes to add to their stout 2017 resume. The Florida team commanded the field in both Micro and Mini Swift, earning podiums in both rounds one and two of the Pro Tour event, as well as becoming the inaugural event winner in Micro Swift.

The Micro Swift class saw pilots Danny Dyzelski and Brandon Carr representing BENIK on track, showing speed all weekend. On Saturday, the duo made up the second row of the starting order for the prefinal. Dyzelski went on to set the fastest lap in the prefinal, and ended the day with a fourth place finish in the main event. Carr worked his way up to the front in the final, setting the fastest lap while doing so. When the checkered flew, he would take home the win with a six second lead, becoming the inaugural WinterNationals winner in Micro Swift. On Sunday, Dyzelski remained consistent all day, scoring eighth in the final. Carr took the win in the prefinal, leading the field to the green for the main event. Leading most of the race, Carr found himself in a last lap battle, crossing the line in third place to land himself on the podium for the second time of the weekend.

In Mini Swift, BENIK drivers Santiago Trisini, Reece Gold, and Carson Morgan were seen at the front of the field all weekend. In round one, they qualified second, third, and fourth respectively, finishing in the same order in the prefinal. In the final, BENIK had three drivers in the top-five, with Trisini and Gold on the podium in second and third. On Sunday, Trisini qualified on pole to kick off round two. He continued to pace the field in the prefinal, taking the win, with Morgan following in second. The main event brought two more podium appearances for the team, with Gold in second and Morgan in third. Trisini would finish in the fourth spot, landing three BENIKs in the top-five once again.

The BENIK team will now head back to Florida for the final rounds of the Florida Winter Tour ROK Cup and Rotax MAX Challenge at Ocala Gran Prix. For more information on BENIK Kart, please contact Nick Mitchell or Ben Cruttenden via e-mail to Info@Benik-Kart.com or by phone at 754.206.4870.