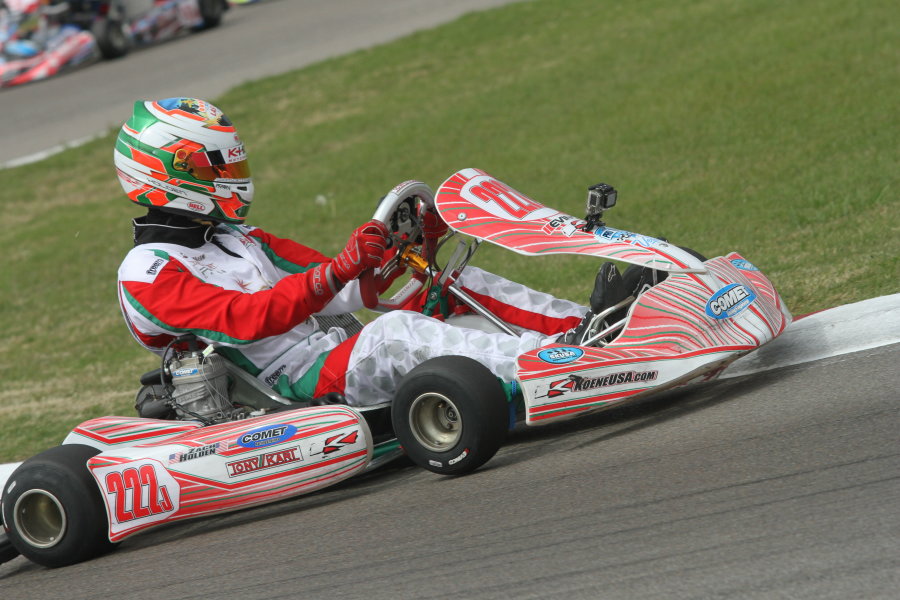 With March already upon us the 2017 Superkarts! USA season kicked off with the WinterNationals at the NOLA Motorsports Park outside New Orleans, LA. Traveling from the WKA Winter Cup the week before, the Comet Team arrived in NOLA ready to do battle against some of the best karting has to offer!

Cars, not karting is Zach Holden’s focus for 2017 but to stay sharp the Holden’s have decided to run the entire Superkarts! USA Pro Tour in the IAME X30 Senior class. The Tony Kart driver didn’t have the best Friday practice struggling with an ill handling kart. After a number of changes for qualifying on Saturday the Greenfield, IN driver was 7th on the grid for the Prefinal but wouldn’t stay there long. Zach quickly made it to the top 3 where he would run the entire race, crossing the line 3rd hoping to retain the preferred inside line for the start of the Final. After a tech infraction by the 2nd place kart, Zach was promoted to the front row for the start of Saturday’s Final. At the start Zach was in the lead pack before making a move for the lead early in the race. After leading a couple circuits the tight racing at the front had shuffled Zach back a couple spots. With a lap to go Zach went for 4th place but contact forced him to slow momentarily which pushed him back to 7th at the line. A frustrating end to a promising day.

For Sunday a 10th place qualifying result meant more setup changes on the kart for the Prefinal. A quick jump up the running order to 4th was a good start but by the end of the Prefinal the kart wasn’t as fast as it needed to be with Zach lining up 6th for Sunday’s Final. For the Final the Comet Team made aggressive changes to the kart. With a solid start Zach was running in the top 3 by the fifth lap and into 2nd a couple laps later. Patiently looking for a chance to go to the lead Zach made his move on lap 11, just past halfway. With a lot of racing going on behind him Zach held the lead until three laps to go when he was briefly put back to second. Zach countered on the next lap to retake the lead. Hitting his marks perfectly the next two circuits Zach was able to pull out a small advantage and cross the line first to win his first Senior X30 final in the Superkarts! USA senior division with his Comet Racing Engines X30 on a Tony Kart chassis!

After the final, Mark Dismore Jr. with Comet Racing Engines spoke about the weekend, “What a great win! It was a total team effort starting with all the work we have done in the engine shop and on the dyno over the last 6 months. Mark Harrison and Gary Lawson have both contributed a massive amount of work to our engine program and it shows every weekend! Paul Holden (Zach’s father) made the right call on the gear and the tire air and I changed the front end, front bar and axle for the final. Not to mention Zach drove a flawless, patient race. It might be the best race I’ve ever seen him drive from start to finish. I can’t wait for Sonoma!”

The Comet team has a couple weeks back at the shop to prepare for the final round of the WKA Winter Cup at Ocala Florida then it’s off to Mooresville, NC for the opening round of the USPKS season. Comet has tent space and track support available for both races as well as Comet blueprinted Yamaha, X30 and Swift engine rentals available for those events. For more information on Comet Racing Engines check out our website https://cometkartsales.com/Comet-Racing-Engines.html or call us at 317-462-3413.