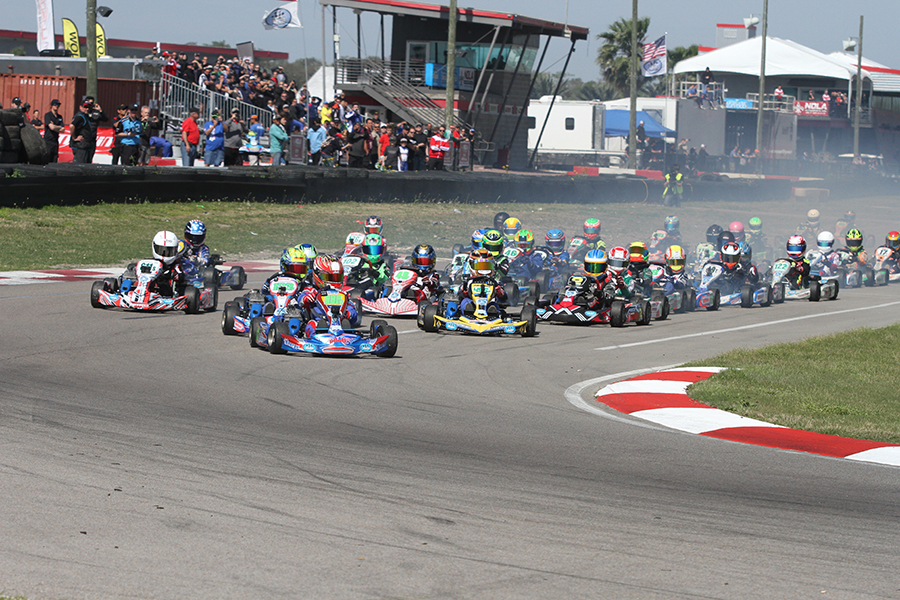 The inaugural Superkarts! USA Pro Tour WinterNationals took place at the NOLA Motorsports Park on March 3-5 in New Orleans, LA. For the first time in the eight year history of the Pro Tour, three distinct events will form the championship chase, beginning with the new WinterNationals. Rather than starting the season in late April/early May, SKUSA kicked off the Pro Tour just over 100 days after the SuperNationals. At 221 drivers, the chase for the 2017 titles are underway following three days of exciting action in the ‘Big Easy’. For complete coverage, head over to the EKN Event Page.

Eyes All Over the Action 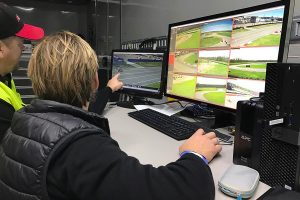 One of the newest components of the SKUSA Pro Tour for 2017 is the introduction of the video marshalling system. Ten cameras were set up around the 1.1-mile course to review the action throughout the weekend, used as extra eyes to compliment what Director of Competition Joe Janowski and his assistant race directors saw throughout the three days of action. On Saturday alone, there were over 140 investigations using the footage captured by the cameras.

The new system and the addition of Janowski to the race day staff is bringing a new atmosphere to how the on-track action is conducted. Janowski was busy throughout the weekend, formulating a new flow chart of procedures within the staff, while making sure things on-track remained safe and respectful. A long list of things to review, improve and tweak was formulated and there is no doubt, more will be added following a debrief of the event with his key personal.

One option I think that will be coming in the future for SKUSA competition is the ‘drop down bumper’. One of the major issues outside rough driving is the terrible race craft at the start of the races. Standing in turn one and reviewing some of the onboard footage captured from drivers throughout the paddock, you can see drivers using the karts in front of them as brakes, rather than using the left foot. While it may not happen in 2017, the United States Pro Kart Series could be the ‘guinea pig’ for the rest of the major programs in US karting as they are the lone program thus far to implement the front bumper system. Unless SKUSA uses the video to lay down heavy penalties for poor race craft at the start, the bumper won’t lie as to who forgot to use their brake pedal. 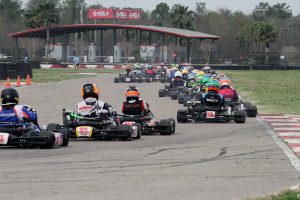 The talk around the paddock about the 1.1-mile course in the counter-clockwise direction was positive but negative. The facility is first-class, and the city of New Orleans is a bucket list trip. Racers liked the layout, however, many thought passing would be difficult. Very similar to the change in direction at the Phoenix Kart Racing Association, they believed the layout in the counter-clockwise direction was amazing, however, it would not race well as racers had to force the issue to make a pass. The width of the track allowed racers to run a shallow line around the course to prevent passing. Once racing got underway in NOLA, they were proven wrong. There were six major passing zones with other opportunities opening up at other sections of the track depending on the class. Overall, the racing on the track appeared to be less chaotic, yet very competitive.

One example of proper race craft was on display Saturday in the X30 Senior division. Former EKN Driver Rankings #1 driver Brandon Jarsocrak showed you can pass without using the bumper or smashing into the side of another competitor. After qualifying on the pole position, a clutch issue delayed the start of his IAME powerplant on the grid and joined the field late, forced to start 43rd in the 15-lap Prefinal. The KartSport North America driver knifed his Praga kart up 29 positions to finish 14th. He backed it up by driving his way to the podium in the Final, completing a pass of 40 karts in 35 laps. At the same time, Braden Eves climbed 32 positions in the Final after a disqualification in the Prefinal.

Competitive Fields in All Nine Divisions 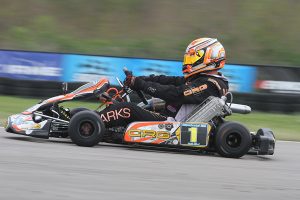 The competition in New Orleans for the WinterNationals brought some of the best drivers from multiple nations with a handful podiums and wins. At least 13 nations (Costa Rica, Peru, Australia, Jamaica, Canada, Netherlands, United Kingdom, Argentina, Brazil, Mexico, New Zealand, Venezuela) were represented on the weekend in addition to the United States. Canada, United Kingdom, Brazil and Jamaica all came away with victory at the inaugural event. Canadian Blake Choquer secured the first X30 Master victory and his first at the SKUSA Pro Tour with a last lap, last corner pass. Last year, Brandon Carr was one of the five different winners for the inaugural season debut of the Micro Swift division. The Brit added another first by winning the feature on Saturday. Renato David became the first Brazilian to win in the S4 Master Stock Honda category in SKUSA Pro Tour history, adding to his X30 Master victory at the SuperNationals this past November. Jamaica is now a country with a SKUSA Pro Tour win as Collin Daley dominated the S2 Semi-Pro Stock Honda action on Sunday.

Just two drivers were able to leave NOLA with two victories on the weekend. Defending S4 Super Master Stock Honda champion Robert Marks and Luca Mars. Marks triumphs were not without a challenge as S4 SM newcomer and former SuperNationals frontrunner Mike Jones put on the pressure Saturday. Sunday, Jones struck first but the CRG driver proved too strong. The category welcomed a record 16 drivers in NOLA, showing the desire for the elder drivers in the sport to race at the national level. Mars took two victories, each of them earned by a last lap pass. The Mini Swift category overall really showed the rest of the paddock how to put on a race. At the front, each driver showed respect for one another while vying to be an inaugural WinterNationals winner – as Mars stole the show both days.

Of course, the best show of the weekend closed out the WinterNationals with the S1 Pro Stock Honda making it an epic race to remember. EKN’s own Rob Howden has stated it as THE best S1 race yet on the SKUSA Pro Tour. It was something special – witnessing S1 rookie Hunter Pickett earn his first Pro Tour victory – and thankfully the cameras from the Greenlight Productions captured every moment as it will be featured in one of the two episodes set to broadcast on CBS Sports Network in just a couple weeks time. Make sure to set the DVRs for those two broadcasts with official days and times to be announced.

‘I Claim This Engine’ 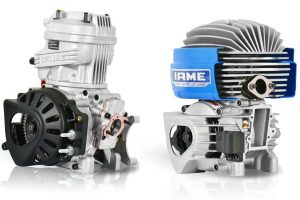 It was like the Louisiana Purchase, with a number of names and engines rumored to be claimed throughout the weekend at the WinterNationals. Over the last year, the engine claim rule has become a very popular topic in regards to the IAME categories at Superkarts! USA. It appears to have carried over from the SuperNationals – described perfectly by EKN’s Rob Howden in his Morning Coffee. There continues to be the perception that certain drivers possess ‘magic motors’ that explain their success and speed on the course.

The official word from Superkarts! USA on the weekend were 1 X30 Senior engine and 2 Mini Swift powerplants claimed from the WinterNats.

Here is a look at the top-five finishers in Mini Swift:

While there appears to be a common engine builder, there is one factor that really stands out. These drivers are on-track nearly every weekend. All six drivers that finished in the top-five have competed at the first two rounds of the Florida Winter Tour Rok program. Trisini is the only driver to race at both Rok and Rotax weekends in January and February. Throughout 2016, these drivers were at all the major events – Rok Cup, USPKS, WKA and of course SKUSA. And when not competing, they are at the track putting in laps.

If you watched either of the main events, you could see the consistency and ease of the wheel by all of these drivers. Smooth and calculated, and most importantly, respectful. Each of these 10-12 year olds respect one another on the track to not punt, shove or drive over one another. Then after scaling the kart, they run off to play electronics or some type of game to keep competition going.

Parents may feel that it is the engine that puts certain drivers at the top of the time sheets, but in reality, its a combination of proper chassis setup, driver coaching, and of course talent that put those in the elite status in the sport of karting. 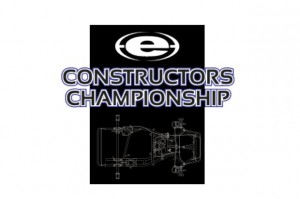 Making up a large percentage of the EKN Constructors Championship program is the Superkarts! USA Pro Tour. What makes the SKUSA Pro Tour so great for the EKN CC is the diversity of chassis brands that compete and score points. Eight of the nine categories qualified with S4 Master only recording nine entries and thus, their results were not part of the weekend. Eighteen different brands scored finishes inside the top-five, which is just three short of the record from last year’s SpringNationals.

It was a great weekend for the SodiKart brand, earning two victories and multiple podiums. Longtime EKN CC title winner Tony Kart was second overall, earning all 62 points in IAME categories with zero earned in the Stock Honda divisions. Benik has just the Cadet model frame and scored the third highest total of the event from the two main events in the Mini Swift category. They accounted for six of the 10 top-five positions.

61 days from the end of the WinterNationals until karts hit the track for official practice day at the Simraceway Performance Karting Center in Sonoma, California for the 2017 SKUSA Pro Tour SpringNationals.