Tony Kart: Success at the 7 Laghi 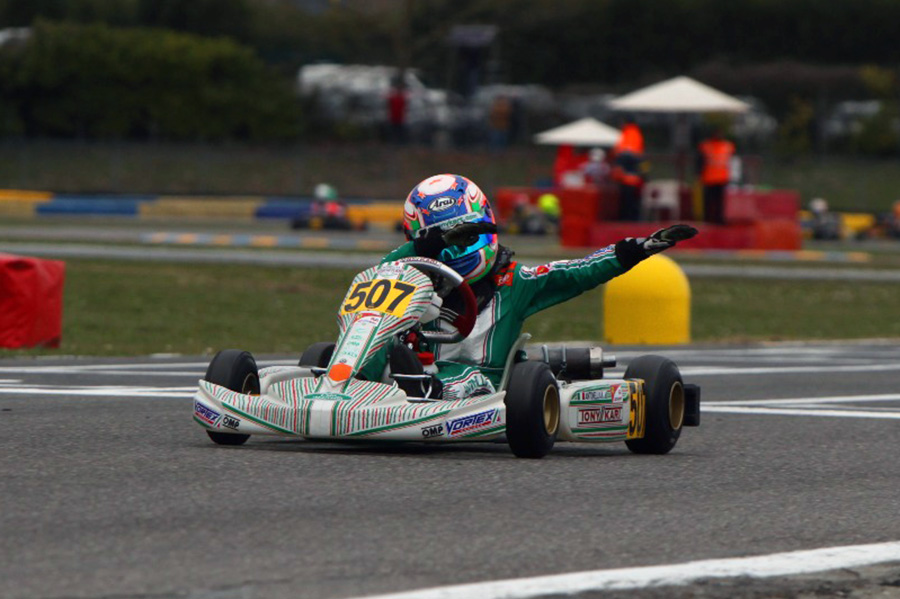 Two victories, in OK and Mini category, with Novalak and Antonelli, and our competitiveness confirmed in all categories. This is the final balance of the weekend at the 7 Laghi, on the occasion of the second round of the WSK Super Master Series. The quality of our products has been further confirmed by the success of the Tony Kart-Vortex of Rosso (Baby Race Team) in OKJ class.

In OK category, our material’s competitiveness has been total, from the early moments of the competition on a wet track. Hiltbrand after the qualifying heats was clearly the best driver, with two wins and as many best laps. Also Vidales and Novalak had a good performance, and got respectively the seventh and eighth place at the end of the heats. It is just them who have scored two victories in the prefinal, with Novalak (prefinal B) first position and Vidales (prefinal A) second one. The prefinal has, unfortunately, been negative for Hiltbrand, ousted from the leading positions of the race, and from the final, due to a collision. In the final, also Petecof entered easily, ninth and author of a good comeback after having run unlucky heats. The final was vibrant and full of turns of events, in a race in which Clément has always run his Racer 401 SVortex at the top places. Clément’s success has been enriched by the excellent second place of the Tony Kart-Vortex of Tonteri (KSM Schumacher Racing Team).

As occurred for Novalak, too, in OK class, also the success of Antonelli in the MINI category has been clear and well prepared since the heats. Our young driver won a heat and led both the prefinal (with a best lap) and the final. The success has unmistakably shown the qualities of the new Neos model, specifically designed for this category. As well as the engine performance of the Vortex Mini MR3, capable of winning a hardened competition. Andrea Antonelli’s success has allowed our young emerging driver to take command of the provisional championship standings.

Many performances but a bit of bad luck prevented us to do better than the fifth place in KZ2. In the early stages of the final, Ardigò, in full fight for the success, got into contact with a rival, losing precious meters, which prevented us from fighting until the end, for the podium and victory. The performance of our chassis has however been formidable in the whole weekend, with both the wet track and the dry track. Ardigò won a heat and got a second place in the prefinal, signing the second best lap of the entire event. Great was also the result of Luca Corberi, perfect winner of two heats, fifth in the final and tenth in the prefinal. Luca has always run in close contact with the best drivers.