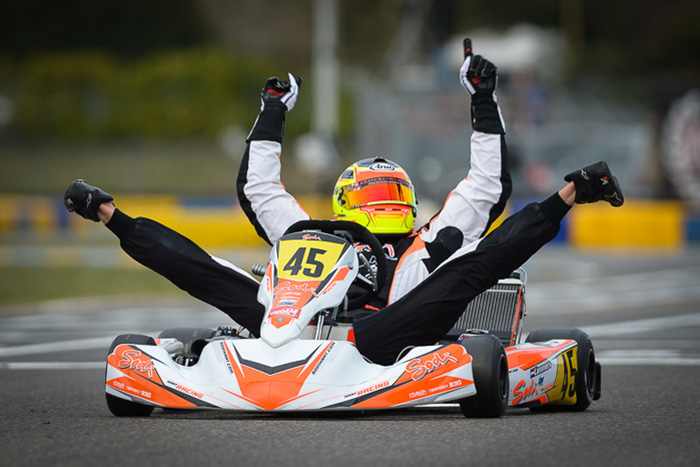 Anthony Abbasse had already won in KZ2 in the rain of Adria and Bas Lammers took a beautiful 3rd place under the sun of Lonato before confirming the superiority of the Sodi chassis by winning the second round of the WSK Super Master Series at Castelletto. While conditions continued to change from wet to dry, the Sodi Racing Team took on the complex technical challenge to make the difference. With two wins and three podiums in three races, the Sodi Racing Team is resolutely the strongest team of the early 2017 season.

“I know some people don’t want to believe it, but it’s the reality: Abbasse and Lammers use the 2017 Sodi Sigma KZ chassis as standard,” said Julien Dexmier, manager of the Sodi Racing Team. “The quality is in part due to its designers and the know-how of the staff at the Sodikart factory in Nantes. During the races, the efficiency and excellent understanding of the members of the Sodi Racing Team work wonders. At Castelletto, we had to deal with very varied grip conditions: a dry track during testing, rain and drying during the Qualifying stages and return of the dry for the Final stages. I am very proud of the team’s work.”

It was Anthony Abbasse who stood out with pole from timed practice, 1st place with two wins in the heats and another victory in Prefinal A, while Bas Lammers won Prefinal B. It was a successful start in the Final for Abbasse and Lammers who succeeded in immediately getting on the right line in the wake of his teammate. Abbasse was jostled twice at the start of the race, but managed to climb from the 6th place to finish in wheeltracks of 3rd despite a damaged rear bumper. Meanwhile, Lammers, 4th on lap 3, returned to his opponents and seized control with authority shortly after mid-race. He then posted the fastest time – the record for the event – and won by almost a second. Alex Irlando ( CPB Sport ), a young KZ2 driver in the middle of the KZ professionals, also impressed with his 6th position in the Final, starting from 27th place.

“The victory for Bas Lammers has made everyone happy,” continued Julien Dexmier. “He deserved to win several times last year and has always had great races. As Anthony Abbasse is continuing to work, we have a pair of drivers at the top of their game. Our partnership with TM Racing is very fruitful. The K10C engine is certainly well bred, and Franco Drudi is constantly developing it. Like the whole team, he is motivated by the success of the Sodi chassis. The season has only just begun, but I think we will achieve great things this year.”

Lammers and Abbasse lead the WSK Super Master Championship with an already substantial gap to their opponents. Even though La Conca’s next meeting on 18th and 19th March does not look easy, the Sodi Racing Team is preparing to approach it with its usual seriousness to aim for victory again.