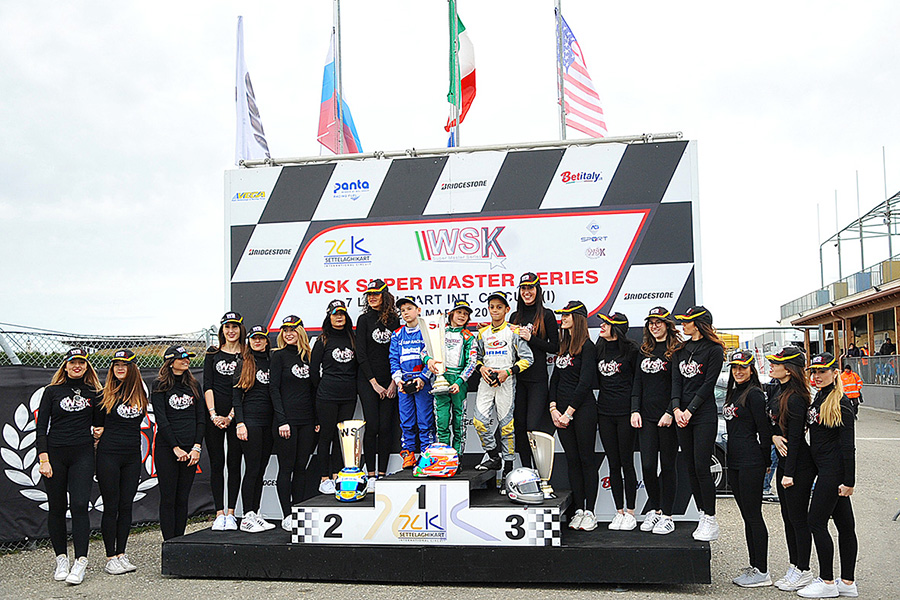 Today the temperature was decidedly spring-like if compared to the one we had at the beginning of the weekend of WSK Super Master Series, hosted by the International Circuit 7 Laghi in Castelletto di Branduzzo (northern Italy). The challenging series of races, made really demanding by the different conditions of the track (rain and low temperature at the beginning and dry asphalt during the final phase), brought new drivers on the podium of the four categories. In two weeks’ time, new appointment on the circuit of La Conca in Muro Leccese (southern Italy).

Novalak wins the ok after a battle which involved three drivers

Big twist in the OK final, during the battle between the Spanish David Vidales, the English Clement Novalak (both on Tony Kart-Vortex-Bridgestone) and the British Tom Joyner (Zanardi-Parilla). Vidales went off track after making contact with Joyner, who had been pushed by another kart during a particularly heated stage of the race. After a tough duel with Novalak, Joyner managed to win the final, but the 5” penalty he received because of the accident made him drop to third. Victory went to Novalak, followed by the Finnish Paavo Tonteri (Tony Kart-Vortex).

Lammers is the pacesetter in KZ2

Leader in the KZ2 Final was Jeremy Iglesias (Formula K-TM-Bridgestone) until the halfway mark, when the Dutch Bas Lammers (Sodi-TM) launched the decisive attack and took over the leadership, which he kept until the finishing line. 3rd place for the Dutch Stan Pex (CRG-TM), who closed the gap with the podium position beating the French Anthony Abbasse (Sodi-TM) into 4th.

The Italian Andrea Rosso (Tony Kart-Vortex-Vega) gained an early lead in the OK Junior Final and managed to keep the head of the race until the chequered flag. Behind him, a battle between three drivers ended with the Russian Pavel Bulantsev (Tony Kart-Vortex) in second position and the Australian Jack Doohan (FA Kart-Vortex) in third. Unfavourable finale for the Italian Mattia Michelotto (Zanardi-Parila), who lost the second position for the misplacement of his front fairing.

The Italian Andrea Antonelli (Tony Kart-Vortex-Vega) achieved his first victory in WSK pulling away in the Final of the 60 Mini. Behind him, the Russian Nikita Bedrin (Tony Kart-TM) and the American Ugo Ugochukwu (Energy-Iame) couldn’t keep his pace and had to settle for 2nd and 3rd.