CRG and Stan Pex on the Podium of WSK in Castelletto 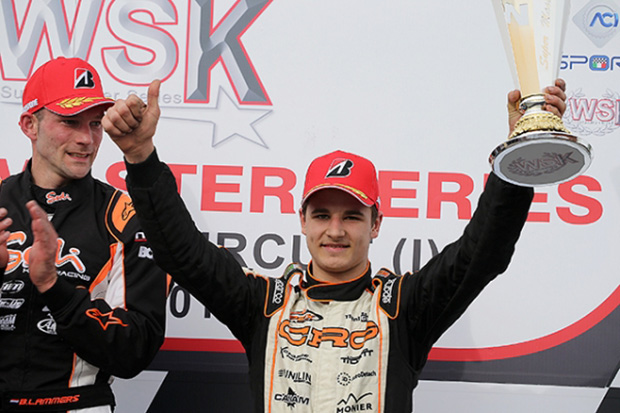 Stan Pex scored a podium on CRG-Tm in KZ2 at the second round of the WSK Super Master Series held in Castelletto. De Conto out due to an incident. Great races for Lombardo in OK, Bortoleto and Henrion in OK-Junior.

CRG Racing Team lived quite a challenging in Castelletto di Branduzzo (Pavia, Italy) at the second round of the WSK Super Master Series. The race has been spoiled by some unlucky events and by particularly bad weather in the first half of the weekend. An excellent result came in the end in KZ2 thanks to Stan Pex on CRG-Tm, but several positive indications  arrived also in OK and OK-Junior.

STAN PEX ON THE KZ2 PODIUM IN CASTELLETTO

The young Dutch driver Stan Pex got again on the podium of WSK in KZ2, thanks to the third place obtained in Castelletto, after the victory taken in WSK Champions Cup at the beginning of the season. Stan put in a stunning comeback run this time around. He climbed all the way from the 28th time in qualifying to the seventh place of the starting grid of the Final, before ending in P3 right in the slipstream of Jeremy Iglesias and the winner Bas Lammers.

Flavio Camponeschi run a great Final too, closing seventh at the end of a weekend in crescendo due to an unlucky qualifying. Paolo De Conto could have also ended on the podium, but he had an incident in the Final when he was in P4 and closing in on the leading group. That was a real pity as De Conto had strong chances to fight for the victory. Jorrit Pex had to retire due to a technical problem after starting 12th.

Some setup problems affected Simo Puhakka’s race and he had to settle for P16, behind team mate Andrea Dalè. Benjamin Tornqvist of CRG Holland was 21st, while Alessandro Giardelli managed to find his place among the finalists and closed his effort in 23rd position. An incident in Prefinal did not allow the British Taymour Kermanshahchi to qualify for the Final. Marco Valenti had a similar fate due to some issues.

The best end result among CRG drivers of OK was secured by Davide Lombardo, who has been the great protagonist of a good sixth place in the Final, after the fifth in Prefinal and the tenth in qualifying and heats. Dennis Hauger has been quite unlucky instead. His weekend did not start on a high, but he promptly recovered in the heats. Hauger’s end result was spoiled by a 10s time penalty in the Prefinal though. Started from the back, Hauger was involved in an incident at turn 2 and this put the word end to his race. The British driver Callum Bradshaw was 15th at the end of a very tight battle, while Michael Rosina has always been among the quickest of the weekend and closed his effort in P18. The Italian ACI Kart Champion of team Morsicani Alessandro Di Cori ended 24th. The Spanish driver Kilian Meyer had to retire from the Final due to an incident instead.

BORTOLETO AND HENRION SHINING IN OK-JUNIOR

The Brazilian Gabriel Bortoleto and the French Gillian Henrion have been shining in OK-Junior, clinching respectively the sixth and seventh place in the Final. Henrion has been very quick also in the heats when he took the first position. The Dutch of CRG Keijzer Racing Kas Haverkort has also been very fast. He claimed the pole position in qualifying and then ended the Final in a good P10. The Spanish driver Ayrton Fontecha has been under the spotlight for the whole weekend, but was slowed down by some battles in the Final ending 26th. The Malaysian driver Nik Zamir Zakwan, the Spanish Jose Antonio Gomez and the French Evann Mallet, could not go beyond Prefinals. The latter had a big crash in his Prefinal, but he luckily escaped serious physical consequences.

SPINA AND GIARDELLI HIT BY BAD LUCK IN 60 MINI

The young drivers of the CRG Gamoto Team could not get on the podium of the very tight 60 Mini this time around, despite a promising start to the weekend. Alessandro Giardelli has been stopped by a problem to the engine in the Final, after being second quickest at the end of heats. Adria’s winner Alfio Spina was also slowed down by a technical problem, but managed to recover up to the seventh place of the Final. Saood Variawa of CRG Holland has been the best of CRG drivers in P5. The updated classification now sees Spina slipped down to P3 and Giardelli to P5.

The WSK Super Master Series will resume next March 19th in La Conca.