Craig and French score in NOLA to begin inaugural event 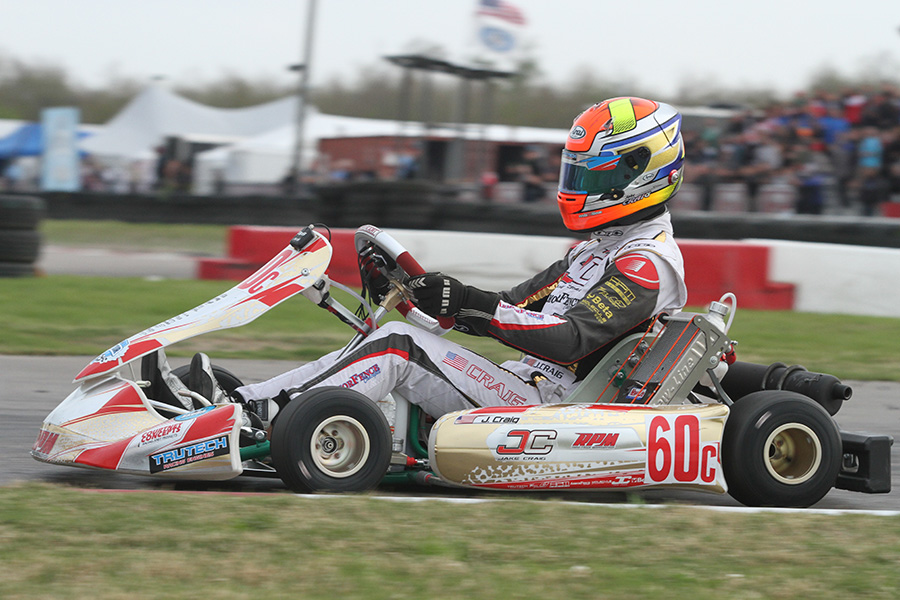 The first ever Superkarts! USA Pro Tour WinterNationals completed the first round of action for the 2017 season at the NOLA Motorsports Park in New Orleans, LA. A sunny day with strong winds greeted the over 220 drivers taking part in the inaugural event, with nine categories beginning the championship chase for the new season. A revised on-track staff, video marshalling, and new race format set the stage for the first day of competition, leading to some great racing, and some not so great moments for a few drivers. Overall, the racing was better with some exciting finishes in the main events. Listen all weekend long at the EKN Live page – www.ekartingnews.com/live 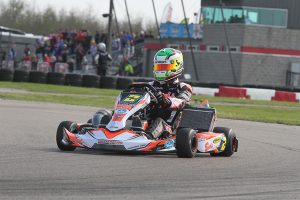 Racing is about opportunities and that was not more evident than in the X30 Senior division. Coming into the event, it was clear who was going to battle for wins in NOLA and challenge for the championship. Brandon Jarsocrak (KartSport NA / Praga) was among those at the top of the list. Jarsocrak edged out the 43-driver field for the fast time in qualifying for a 1:01.711-lap. Set to start on the pole position for the Prefinal, Jarsocrak had an issue starting his IAME powerplant when the field left the grid. It put him at the tail of the field for the green flag, opening the door for outside polesitter Christian Brooks (Nash Motorsportz / FA Kart), leading the final 11 laps of the Prefinal for the race win. SpringNationals winner Braden Eves (MDD / Kosmic) ran second after leading early, but was removed following tech for a fuel infraction. This put Senior sophomore Zach Holden (Koene USA / Tony Kart) on the outside of the front row. Jarsocrak drove his way up to the 14th, but ahead of him 2016 SuperNationals winner Jake Craig (RPM / Tony Kart) advanced from 16th to fifth. Brooks set the pace for the majority of the Final with Craig finding his way into the second spot. The two were able to push away out front alone in the second half, and Craig’s pace got quicker. Taking the lead on lap 17, Craig posted his fastest laps of the race to pull away from Brooks. After 20 laps, Craig made it two straight SKUSA victories and became the inaugural WinterNationals winner. Brooks settled for second while the fight for third went down to the wire. All eyes were on Jarsocrak, who knifed his way forward and into the third position to land a podium result, passing 40 karts over 35 laps. Defending Pro Tour champion Ryan Norberg (PSL / Birel ART) ran fourth with 2016 Junior Pro Tour champion Alex Bertagnoli (Franklin / Merlin) keeping his nose clean all race long to record a top-five result.

The WinterNationals is setting history with the inaugural event, and Jake French made it extra special with his first SKUSA Pro Tour victory in the S1 Pro Stock Honda division. The field was chasing Billy Musgrave (MRC / Aluminos) to begin the day as the three-time California ProKart Challenge driver set the fast time with a 1:00.019-lap. Musgrave grabbed the holeshot but it was SKUSA #2 plate holder Jake French (DKC / Sodi Kart) that paced the field toward the win. With the holeshot, French was able to get out and away from the rest of the field early. French led all 20 laps to score the monumental victory. Musgrave was able to fend off defending SKUSA Pro Tour champion Daniel Formal (DRT / DR Kart) for the runner-up position. S1 rookie Mathias Ramirez (Andersen / Birel ART) drove to fourth with 2016 double SummerNationals winner AJ Myers (TB Kart) placing fifth. 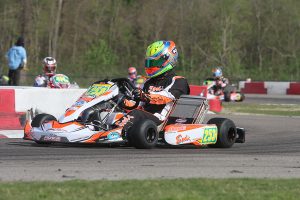 The S2 Semi-Pro Stock Honda class looked to belong to Jamaican Collin Daley. The DRT Racing / DR Kart pilot nearly put himself inside the top-five for the overall S1/S2 group in qualifying, before leading all 15 laps in the Prefinal. An issue with the shifter lever slowed down his pace early in the main event, eventually pulling off with the issue becoming much worse. This handed the lead over to S2 rookie Riley Dickinson. The DKC / Sodi Kart pilot never put a wheel wrong, driving to his first SKUSA Pro Tour victory. Canadian Gianfranco Mazzaferro (PSL / Birel ART) drove to the runner-up spot ahead of Kyle Wick (RPG / CRG) with Sky Finely (DKC / Sodi Kart) and Harry Gottsacker (Champion Racing / Intrepid) making it three drivers from the Texas PKC program inside the top-five.

The top-two drivers from 2016 in the S4 Master Stock Honda set the tone from the beginning for Round One. Former champ Jordon Musser (3G Kart Racing / Birel ART) swept the day with defending champion Ryan Kinnear right threre. Musser led all 14 laps of the Prefinal while Kinnear grabbed the holeshot for the main event. Musser went on the offensive quickly, taking back the spot and was able to creep away lap by lap to a 1.9-second advantage to begin 2017 with a victory. 2016 X30 Master SuperNationals winner Renato David (Orsolon / Birel ART) picked up the pace in the Final, working past Kinnear for the second spot to earn his first Pro Tour podium in S4. Ben Schermerhorn (Birel ART) started out his rookie S4 season with a fourth place run ahead of Victor Jimenez (RPG / Tony Kart). 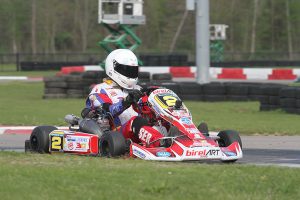 Jordon Musser walked away with the victory in S4 (Photo: EKN)

S4 Super Master Stock Honda was a great battle to the end with four drivers in the hunt throughout the day. Mike Jones (DKC / Sodi Kart) appeared to be the driver to beat by setting fast time in qualifying and going on to win the Prefinal. MRC drivers John Crow (Praga) and Willy Musgrave (DR Kart) joined him at the front along with defending champion Robert Marks (CRG). Marks lost a few positions at the start but was able to lay down fast laps in class to work past both Musgrave and Crow, and set his sights on Jones. With just a few circuit remaining, Marks took the lead from Jones for the first time. Marks never put a tire wrong the last laps, reaching the checkered flag first. Jones settled for second with Musgrave taking third over Crow. CRG Nordam driver Kevin Woods (RWR / CRG) took home the fifth position.

The day looked to be all Derek Wang in the X30 Master division. The defending champion set fast time in qualifying and was able to escape some early carnage in the Prefinal that included top challengers Carlos Calderon (Aluminos) and Luis Zervigon (Birel ART). Wang was not able to escape tech, removed from the results for a missing air filter. That promoted Laurentiu Mardan (KartCraft / Kosmic) to the pole position for the main event. A solid lead group began the main event with Mardan looking to be the quickest driver. He would fade with BBR Karting teammates Blake Choquer (PDB) and Mario Barrios (PDB) were able to get away at the end. The two set up for a great last lap, as Barrios defended down to the final corner. Choquer set it up perfectly for the up and under, getting a better run out of the turn and winning the drag race to the checkered flag for his first Pro Tour victory. Barrios had to settle dof second, 31 thousandths short of the win. Jason Vince (KartSport North America / Deadly Kart) advanced up to finish third for his first Pro Tour podium result with Travis Irving (Formula Works / CompKart) also working up to fourth. Mardan stuggled in the final few laps, dropping to 11th with Miguel Mier (DKC / Sodi Kart) earning the fifth spot. 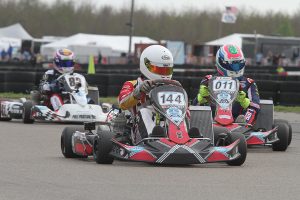 In a performance very similar to the SummerNationals, Dylan Tavella became an inaugural winner of the WinterNationals in X30 Junior. Tavella was fourth after qualifying as Aidan Keel (Anderson / Birel ART) put down a fast lap in qualifying all by himself to lead the field to the green flag in the Prefinal. Tavella worked his way forward in the 14-lap race, scoring the victory. From the pole position, Tavella never looked back. Tyler Gonzalez (SCR / Tony Kart) gave him an early challenge, never able to work past as Tavella lead all 19 laps for the victory. Nicholas d’Orlando (J3 / CompKart) won the battle for the third spot on the podium over Keel, who recorded the fast lap of the race. Junior rookie Arias Deukmedjian (Tony Kart) drove to a solid fifth place result. Hard charger went to Joseph Daniele (RPM / Tony Kart) who had a mechanical issue during the Prefinal while running toward the front. He advance 22 positions to end up just outside the top-10 in 11th.

It was another photo finish in the Mini Swift category with a full field of drivers all vying to be the inaugural winner. It was down to three during the main event with top qualifier and Prefinal winner Luca Mars (Energy) joined by Benik teammates Santiago Trisini and Reece Gold. It was gold leading as the trio took the white flag until he drifted wide at the exit of turn one, that allowed both Trisini and Mars to draft past. Gold fought back to take back those two positions and went into the final corner leading. He defended to the inside and lost the momentum on the exit. This allowed both Trisini and Mars to slip inside and drag race to the checkered. At the line, Mars completed the sweep by 49 thousandths of a second over Trisini. Gold settled for third with Connor Zilisch (Energy) stealing the fast lap bonus away with a fourth place result and Carson Morgan (Benik) completing the top-five. 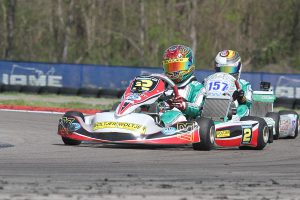 Brandon Carr began the 2017 season with the goal of improving the #2 Micro Swift SKUSA plate on the side of his Benik machine to read #1. A dominating victory began that cause. Carr was able to out run the entire field in the main event to score the inaugural victory. Elliot Cox (Vemme) was the fast driver in qualifying and scored the win in the Prefinal. Contact dropped Carr down to seventh in the 13-lap race, putting him inside row four for the main event. It took Carr just six laps in the Final to work past Cox, and begin to pull away. Cox was unable to match Carr’s pace, falling over six seconds back of Carr as the Brit took the victory. The fight was for third all race long with Alex Powell (Tony Kart) beating Danny Dyszelski (Vemme) to the line as Caleb Gafrarar (Parolin) – also involved in the Prefinal skirmish – advance nine spots to fifth as the hard charger.