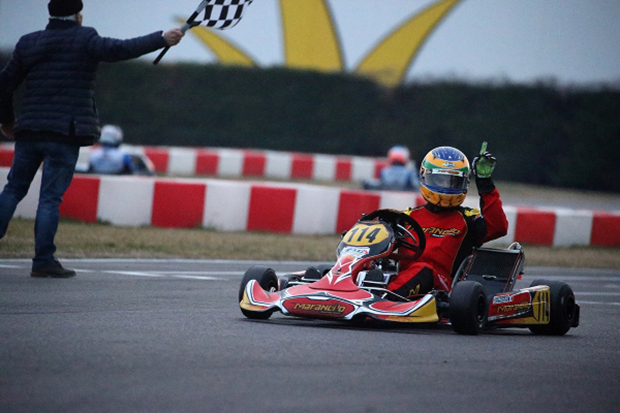 The first round of the 28th Spring Trophy has seen Maranello Kart taking the win in KZ2 with Gonzales and locking out the podium with Dante and Pastacaldi. Sani was among the quickest but penalized. Tonoli victorious at the debut with Maranello in KZ3 Over.

Maranello Kart has displayed a strong competitiveness in the first of the two rounds of the 28th Spring Trophy. The race held in Lonato has witnessed a fair and square domination of the Italian outfit in KZ2 with Nicolas Gonzales taking the win, as Massimo Dante and Marco Pastacaldi ended on the podium alongside him.  Andrea Tonoli clinched a splendid victory in KZ3 Over.

MARANELLO KART LOCKING OUT THE PODIUM IN KZ2

Nicolas Gonzales has been shining in his debut race with Maranello Kart’s works team led by Stefano Griggio and Tiziano Rizzi for engines by TM Racing in KZ2. Gonzales has been protagonist at the South Garda Karting track since qualifying, when he posted the record time of 45.746s, which was the absolute quickest lap among those set by the 37 drivers on track in this category.  Gonzales kept his momentum in the heats and confirmed his pace in the Final, as he took an early lead crossing the finish line in first place.

Maranello Kart has been protagonist in KZ2 also with Massimo Dante who completed a great comeback crossing the line in P3, result that was then turned into P2 due to a penalty handed to Ruggeri, due to his irregular starting position. The all-Maranello podium was rounded off by Marco Pastacaldi, also on Maranello-Tm, who completed his comeback run in P3 from the starting ninth place of the grid.

The other Maranello Kart’s driver Flavio Sani, has been among the main protagonists of the Final on Modena engine, but was handed a 5s time penalty for an incorrect positioning on the starting grid and this made him slip down from P3 to the eleventh place. That was a real pity as Sani had  run a very good race.

Among the other main protagonists on Maranello, Marco Vannini was 12th after posting the fourth absolute time in qualifying, Luigi Del Vecchio was 14th and Martin Konopka 18th. The Austrian driver Cristoph Hold was involved in an incident at lap one after shining with the absolute P3 in qualifying and claiming the victory in one heat.

GREAT VICTORY BY TONOLI IN KZ3 OVER

Andrea Tonoli scored another great performance in KZ3 Over despite being at the debut on Maranello Kart. Former 2015 Italian Champion of Prodriver Over Tonoli put in a good race taking the win from former European Champion Roberto Profico to team mate Cristian Griggio, who was third on the podium, after having the upper hand on Gianni Corti, also on Maranello-Tm. In this category, Maranello chassis have been shining also in the hands of Ferruccio Alacqua who was sixth and Fabio Danti, seventh. Attilio Borghi was ninth and Manuel Marcon tenth. Patrick Thur had to retire instead.

In KZ3 Under, Michael Dalle Stelle has been one of the main protagonists on Maranello Kart. He was second at the flag, but a 10s penalty due to a jump start voided this great result. Dalle Stelle slipped down to P5, while Marco Dalle Vedove and Patrick Vogler did not finish. In KZ3 Junior, Maranello Kart’s Marco Miastkowski was seventh, while Roberto Cesari had to retire one third into the race while fighting for the podium. In KZ4, Maurizio Giberti got on the podium in P2 on Maranello-Tm, and Giancarlo Cressoni was seventh. Lukas Aberer was fourth in OK-Junior.

Category 60 Mini saw 20 drivers at the start. The quickest on Maranello were KCL Racing’s  Kiano Blum and Maranello Austria’s Lukas Zbul, that closed their effort respectively in P7 and P8, while William and Lukas Hofer also run a good race ending respectively 12th and 14th.

The closing round of the 28th Spring Trophy will take place in Lonato next March 12.