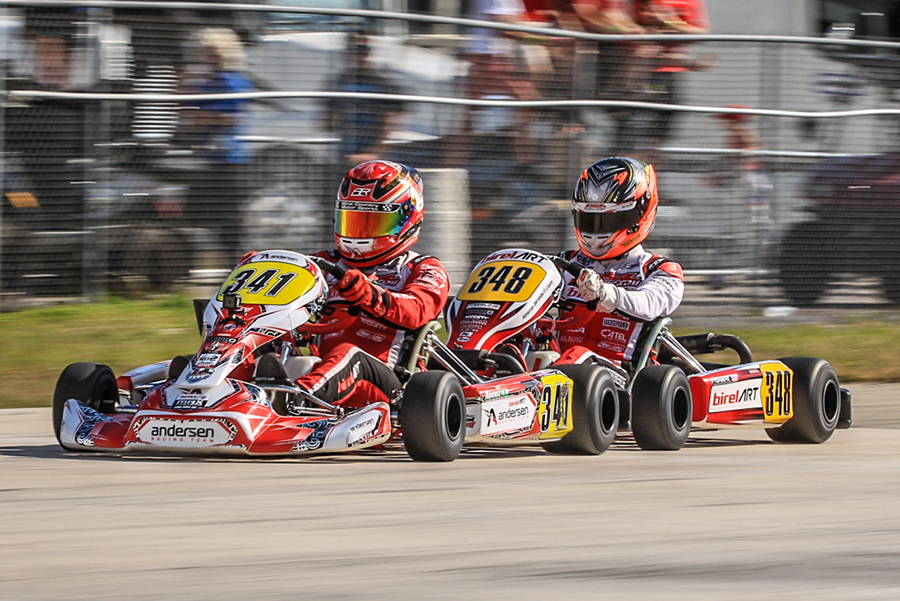 The Andersen Racing Team is on a roll after leaving the 2nd round of the Florida Winter Tour, competing in both ROK and Rotax events. With an impressive lineup of drivers coupled with its race winning staff and structure, it is no surprise that the squad was able to turn heads during both weeks of competition.

First up was the Florida Winter ROK event where the team entered 3 drivers. In Junior Rok, Ayrton Ori flew the team colors. Being only one of Ori’s first international level events, the young JR ROK pilot was focused on improving every session. Aryton did just that, making many personal best laps throughout the heats and passing many of his competitors. Ori will look to improve on his finishing record next month in Ocala.

In the Shifter category Mathias Ramirez and Michael Stevens were representing the Andersen Racing Team. Being his first race with the team Michael Stevens, a young driver hailing from Florida, was keen to make a strong impression on the field. Despite some bad luck in the heat races, Michael was able to rebound by coming from dead last to finish 15th in the final. Mathias Ramirez was forced to retire in the first heat but went on to set the fast lap in every heat race only to be taken out in the pre-final. He bounced back in solid fashion, coming from dead last to finish in 8th place in the star studded Rok Shifter Senior class.

The next weekend saw racing aboard the Rotax Max power plant in which the Team entered 7 drivers. Starting the weekend off would be the Junior Max drivers.

Aidan Keel and Kai Palomino would represent the team in the Junior class. Both drivers were extremely fast all weekend but unfortunately got caught up in racing incidents in the pre-final. Palomino would recover from 17th place to an 8th place finish and, just following, his teammate Keel would come from dead last to finish in 9th place taking the fastest lap honors of the race. After the race, Aidan keel had this to say:

“I am disappointed that I had to start from last place in the final. As everyone would agree, I was the fastest driver on the track in the final and could have easily fought for the win. I want to thank the Andersen Racing Team for giving me such competitive equipment and my mechanic Ryan for working so hard to make my kart perfect.”

In DD2, the Andersen Racing Team entered 3 drivers. New driver, Benjamin Hites from Chile, would improve every session and come home in the 11th position. Another team driver, James Armas, would also look to tackle only his 2nd dd2 race ever. James steadily improved all weekend to finally capture the 10th position. Finally, the veteran dd2 driver of the team Michael McCarthy, would battle technical issues all weekend. Everything came together for Michael in the final as he saw himself in the second position and ready to mount a challenge for the lead. Michael’s weekend, however, would come to an unfortunate end as he was removed from the track forcefully by another competitor and forced to retire.

Last, but not least, was the epic drive conducted by Mathias Ramirez. Mathias, who is a member of the Andersen Racing Team’s Mazda Road To Indy Development Program, was the lone Senior Max driver for the weekend. Mathias, who is only 14 years old, schooled the field all weekend and put on a show for everyone. Starting from the pole position for the final, Mathias waged a 22-lap battle against some of the country’s best drivers and came out on top. Mathias confirmed the speed of the Birel-Art chassis and the ability of the Andersen Racing Team to find the perfect set-up for the ever-changing Palm Beach circuit.

Next up for the Andersen Racing Team will be the upcoming Skusa WinterNats held in New Orleans on March 2-3.

“I am very happy with performance displayed by all of our drivers this weekend. It was by no means an easy week, but the important fact is that we were consistently the fastest karts on the track and had the best prepped equipment. Congratulations to all of the drivers in our program and thank you for representing us well. We are looking forward to our debut in the SKUSA series in 2 weeks time.” – Jake Mottaz

As the official karting team of the Mazda Road To Indy, members of the Andersen Racing Team receive an all-inclusive service. Going beyond the call of ordinary karting programs, the Andersen program seeks solely to mold young karters and help them progress into the open wheel ranks.

The Mazda Road To Indy (operated by Andersen promotions) is, aside from the Team’s parent company, one of the most successful driver development programs in the world, providing a unique scholarship-funded path to reach the Verizon IndyCar Series and Indianapolis 500.

The team is headquartered at Andersen RacePark in Palmetto, FL. The RacePark features a 1 mile test track for both karts and race cars. Additionally, the facility boasts 22 trackside garages, a lake, a full service karting organization, and Andersen Racing’s immaculate 8,000 sq ft shop.

For more info, contact 1.941.723.3900 or visit http://www.andersenracepark.com. To reach the team and start your career today contact ryan@andersenracing.com.