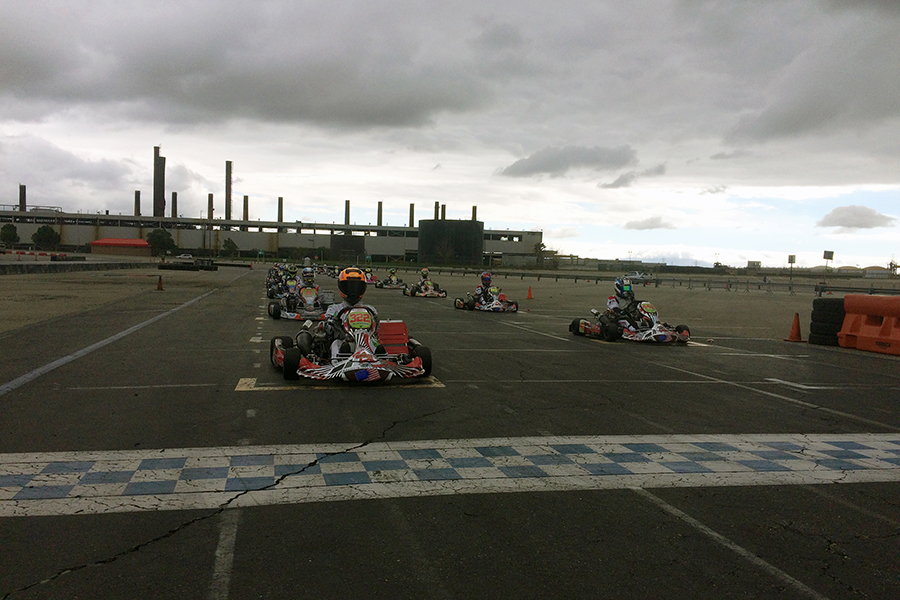 Los Angeles Karting Championship got 2017 underway with the first round held on February 19 (Photo: lakc.org)

The 2017 Los Angeles Karting Championship is officially underway following the completion of the opening round at the CalSpeed Karting Center in Fontana, California. In total, over 150 drivers in 21 divisions began their championship chase during the February 19 event. Among them were a handful of new classes, focused on building entry-level participation back into the LAKC program for all engine categories. The weather was questionable throughout the day, with nearly all the on-track sessions run on dry track with the exception of a slight drizzle of precipitation during a couple races. Overall, competitors were eager to start the new racing season and return back to the race track.

The largest class of the event was the Mini Swift division, welcoming 22 drivers for the opening round of 2017. The class was the first group to hit the track for each session, as Cole Morgan opened up as the first top qualifier of 2017, posting a 49.014-lap to beat out Chance Gibson and Steven Grafton. Morgan established a solid gap over the rest of the field in the Prefinal to lead all 10 laps with Daniel Inzunza coming up to finish second. Both Inzunza and Gibson were able to stay with Morgan early on, putting on a fight during the second half of the 18-lap main event. Inzunza was able to record the fast lap of the race, taking over the lead briefly and once again on lap 16. Morgan retook the position as they reached the white flag with Gibson running in second. It came down to a photo finish after a wild last lap, as Gibson reached the checkered flag first by 31 thousandths of a second for the victory over Morgan. Inzunza was a close third to complete the podium with Kasey Gillis advancing 18 positions to fourth and Christian Mauthe in fifth.

Next on the docket was the Micro Swift, that saw Austin Manka score the opening round victory. Dane Idelson was quickest of the 14 drivers in qualifying, producing a 50.620-lap. Manka came up from the third spot to lead on the Prefinal opening lap, leading all 10 laps for the win. Fast laps of the race put Manka well out in front in the Final, going wire-to-wire for a 12-second advantage. Al Zarcone came away with the second spot with Enzo Deligny coming up from the back to finish third. Idelson overcame a DQ in the heat race to place fourth with Tucker Horne rounding out the top-five.

The X30 Pro division opened the year with 12 drivers, led by Christian Brooks. The 2015 California ProKart Challenge champion was able to lead the Prefinal and Final sessions to begin the year with a victory. Colby Dubato nipped Brooks for the fast time in qualifying by just three thousandths of a second with a 44.102-second lap. Brooks took the lead from Dubato on lap two of the heat race, leading the rest of the way for the win and never relinquished the top position in the 18-lap main event. Cody Kelleher drove to the second spot with Worawong Komarakul completing the podium. Jesse Gutierrez drove to fourth with Dubato dropping to fifth.

Brenden Delorto swept the action in the X30 Intermediate category, which was added to the LAKC program with the creation of the Pro division. Delorto set fast time in qualifying (44.779) before leading all the laps of the Prefinal. Eric Slivoff demoted Delorto to second at the start of the main event, only to lose the spot on lap five. From there, Delorto led the rest of the way to earn the victory as Slivoff settled for second. Brendon Cramer was a close third. Making up the rest of the top-five was Gregory DiMaggio and Kyle Babida.

A solid group of shifterkart drivers showed up for the opening weekend for the LAKC, including nine in the S2 Semi-Pro Stock Honda division and 10 in the S3 Novice Stock Honda category. Garrett McKelvie appeared to be the driver to beat in S2 after capturing the fast time in qualifying and leading all 10 laps of the Prefinal. Josh Early and Robert Heck Jr. were there to challenge in the main event. Early took the lead on the opening circuit and held the top spot until lap 15 with Heck taking over the spot. Working to third place overall in the S1/S2/S3 race group, Heck drove away for the victory. Early held on to the second spot with last year’s S3 champion Royal McKee standing on the podium in third. Gianfranco Casadei dropped McKelvie to the fifth position on the final lap.

Jacob Pope is the early contender for the S3 title with his sweep of the opening round. Pope laid down the fast lap in qualifying and never relinquished the top spot in the class. Pope led all 10 laps in the Prefinal and 18 circuits in the main event for the victory. Evan Jonker and Indy Sandoval completed the podium.

Fifteen months, two surgeries and many days of physical therapy after an accident, Kalvin Chen returned where he left off in the seat of a kart. Chen swept the S4 Super Master Stock Moto division on the day to complete the long journey back behind the wheel, driving to a 14-second advantage in the main event. Warren Kindberg was the runner-up with Chris Curtis placing third. Open 125 Shifter defending champion Slava Prikhodko began where he left off in 2016, earning a sweep to begin 2017. Prikhodko went wire-to-wire over Tyler Coffman with Brennon Viera making up the podium.

One of the newest categories is the X30 Junior Expert division, moving those with the experience and talent into their own class to allow others to progress within the race group. Joseph Daniele came away as the inaugural winner. Alex Siragusa held the advantage after qualifying, posting a 44.458-lap to secure fast time by eight thousandths over Daniele. At the drop of the green for the Prefinal, Daniele got the jump and led all 10 laps for the race win with Siragusa in second. Siragusa was involved in an opening lap wreck, taking him out of the main event and allowed Daniele to run away with the victory. Leading all 18 circuits, Daniele pulled away to a 3.1-second advantage over Trey Brown. Bryce Stevens completed the podium ahead of last year’s LAKC champion Ryan Schartau and Colin Queen.

Stephen Bruckner took the inaugural honors in the new X30 Junior Novice division. Bruckner was able to advance his way to the class lead in the main event, scoring the win by just under a second over Lanie Benjamin with top qualifier and Prefinal winner Dakota Tate placing third.

Junior 1 Comer has always been a competitive category at the LAKC with eight drivers taking part at the season opener. Cooper Hicks was able to capitalize and score the Round One victory. Troy Hageman was the top qualifier with Hicks as the lead challenger. The two went back and forth to begin the Prefinal before Hageman retired early. That gave Hicks the clear run to the Prefinal win and drove away to a green-to-checkered run in the Final. Hageman advanced his way back up to second from the tail of the field, 12 seconds back. AJ Matheson rounded out the podium.

Gary Lennon was another driver to score a sweep at the opening event of 2017, landing the victory in the X30 Master category but not without a challenge. Lennon secured fast time in qualifying (45.554) before leading all 10 laps in the heat race. Vatche Tatikian was the quickest driver, coming from seventh to second to set up a race for the win in the Final. Tatikian took the lead from Lennon on lap two, and set the pace throughout the race. On the final circuit, Lennon was able to complete a pass for the lead and edged out Tatikian at the checkered flag by 76 thousandths of a second. Bryan Lampe rounded out the podium.

New for the LAKC is the introduction of the Briggs & Stratton 206 engine package to the class lineup, featuring Senior, Masters and Novice divisions. The Senior class had eight drivers take part with Henry Morse as the victor. He led wire-to-wire in the main event to score the victory by over three-seconds ahead of top qualifier Matt Johnson and Jonathan Kimbrell.

John Antonino was perfect on the day to sweep the Honda Kid Kart class. Antonino was the top driver in every session to beat out the other seven competitors for a perfect score, including fast lap in the main event. Truly Adams and Brayden Welter joined him on the podium.