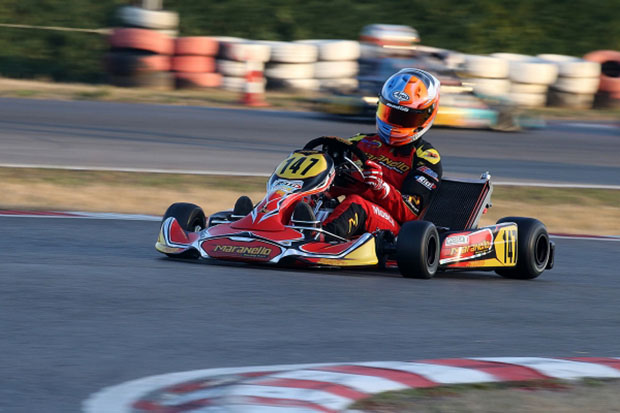 Tommaso Mosca and Alberto Cavalieri run a good race at the 22nd Winter Cup of Lonato and put in interesting performances, despite some hiccups. Maranello Kart  thanks Tommaso Mosca, who is about to make his debut in motor racing.

Maranello Kart run a challenging but exciting Winter Cup with its two color bearers Tommaso Mosca and Alberto Cavalieri. Both drivers managed to get access to the KZ2 Final at the end of the qualifying stages that named the finalists among the 90 drivers that entered edition 22nd of this important international event.

The tight schedule to prepare the race and the approach to the new Bridgestone tyres did not allow Maranello Kart’s drivers to show their best, but their level has been high throughout the weekend.

Thanks to the support of team manager Stefano Griggio and of Tiziano Rizzi regarding engines by  TM Racing, Tommaso Mosca managed to be productive since qualifying and posted the 10th time of his session, as did Alberto Cavalieri who was 14th. Mosca unfortunately scored a DNF in one qualifying heat, but then took a sixth, a fourth and a third place, while Cavalieri had to fight a bit more in the middle of the pack, managing to find his place among the drivers qualified for the two Super Heats first and for the Final then. In the Final, Mosca and Cavalieri could not perform as they would have desired though. Cavalieri managed to cross the finish line in P24, while Mosca retired 6 laps earlier.

The end result could have been better, but the whole team is satisfied with the race of the two drivers and for the several spots of high competitiveness shown during the weekend.

This Winter Cup has been Tommaso Mosca’s final race in karting, as the Italian – who has been awarded by Automobile Club Brescia for his sporting career in the past few days, is about to switch to motorsport.

Luca Iannaccone, Maranello Kart manager: “I take this chance to thank Tommaso Mosca who is about to begin a new adventure in motorsport. I wish to thank Tommaso for all the support he gave us in the years spent together, as well as for the results obtained with Maranello Kart, his commitment and professionalism. I honestly feel like Tommaso did not say the final goodbye to karting, we might see him again with us in some important occasion. I send him my best wishes and all team’s for his new career. I believe he will be successful in motorsport.”

The next appointment on track for Maranello Kart will be in Lonato on Sunday February 26th 2017 at the first round of the Spring Trophy, race that will see a lot of Maranello drivers on track in the different categories.