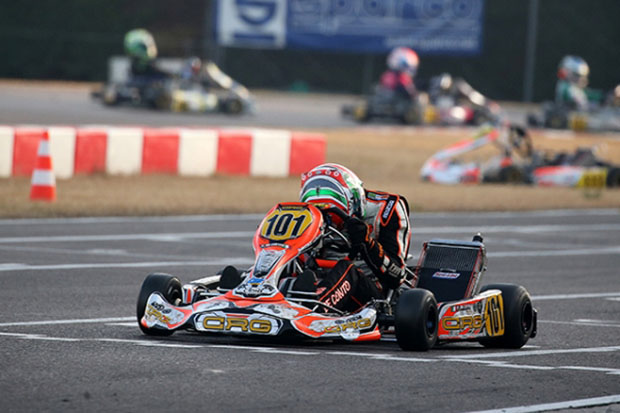 Paolo De Conto secured the second place in KZ on CRG-Tm at the 22nd Winter Cup, as did Dennis Hauger in OK, after fighting for the victory. The young Alfio Spina took the win in Mini Rok with Team Gamoto at the end of an exciting final.

CRG put in a great performance at the Winter Cup of Lonato, fielding a big and competitive driver lineup in all categories. The strongest results came in the end mainly in KZ2, where Paolo De Conto secured the second place, and in OK with another second place claimed by a surprising Dennis Hauger. The victory of Mini Rok went to the very quick Alfio Spina and to team Gamoto.

Reigning World Champion Paolo De Conto did his best to take the KZ2 win at the 22nd Winter Cup on CRG-Tm, race that had an exceptional highly-ranked entry list of 89 international drivers. Unfortunately, De Conto had some hiccups in the heats and in the Final he had to put in a great comeback, closing his effort right in the slipstream of the winner Jemery Iglesias. Had De Conto started a bit higher up than from the eighth spot of the grid, the end result could have certainly been different.

“After qualifying that did not go very well and the incident in the final heat – declared Paolo De Conto – the end result has been positive. I am very happy on how things went this weekend, as I kept increasing my speed. If I had started the Final higher up the grid, I could have fought for the victory. But I am fine with this result. This is a good start to the season.”

Among the other CRG finalists of KZ2, Flavio Camponeschi confirmed his place among the front runners ending sixth, team SRP’s Fabian Federer had to settle for P9 due to an incident after being among the absolute quickest on track. Mirko Torsellini put in strong races but lacked a little bit of speed before being handed a 10s time penalty for the incorrectly placed front fairing in the Final. Simo Puhakka run a solid weekend all the way up to the Final, where he was stopped by an incident during the first lap.

The Spanish driver Enrico Prosperi had an unlucky debut and could not qualify for the Final due to a series of issues, as happened to Alessandro Giardelli and Marco Valenti that accumulated some delay in the heats.

The Norwegian driver of CRG Dennis Hauger has been dominating OK on CRG-Parilla, despite this being his first season in OK following last year’s debut in OK Junior. Hauger found his place among the main protagonists also in this category, fighting equal with more experienced drivers. In the Final he also managed to get the lead, before being pushed down to P4 and then climbing up again to P2, engaging a battle for the victory. He put in a great performance, closing his race right in Travisanutto’s slipstream, as the latter led a Zanardi kart back to the victory.

Regarding the other CRG finalists of OK, the Spanish Kilian Meyer was 14th, Michael Rosina  19th and Callum Bradshaw 21st, while William Alatalo had to retire from the race.

CRG’s youngsters of OK-Junior displayed great speed, but could not get the most of their competitiveness in the end. The best was the German rookie Donar Nils Munding, who recovered all the way to the final P13, leading the French Evann Mallet. Gabriel Bortoleto had an excursion at the start and closed his race in P29. This was a real pity as the Brazilian had been shining in the heats and Super Heat. The Spanish driver Jose Antonio Gomez could not qualify for the Final by just one point.

Alfio Spina and Team Gamoto have been shining again in Mini Rok. The Italian won a photo-finish Final by only 0.01s, exciting spectators. The very young Spina completed a great comeback at this Winter Cup, as he recovered from P18 after heats to the second place of Super Heat, a result that granted him a third row start in the Final. Spina recovered the remaining positions early in the Final and then managed to fend off the Russian Bedrin. Among the best drivers, Luca Giardelli of Team Gamoto ended 11th.