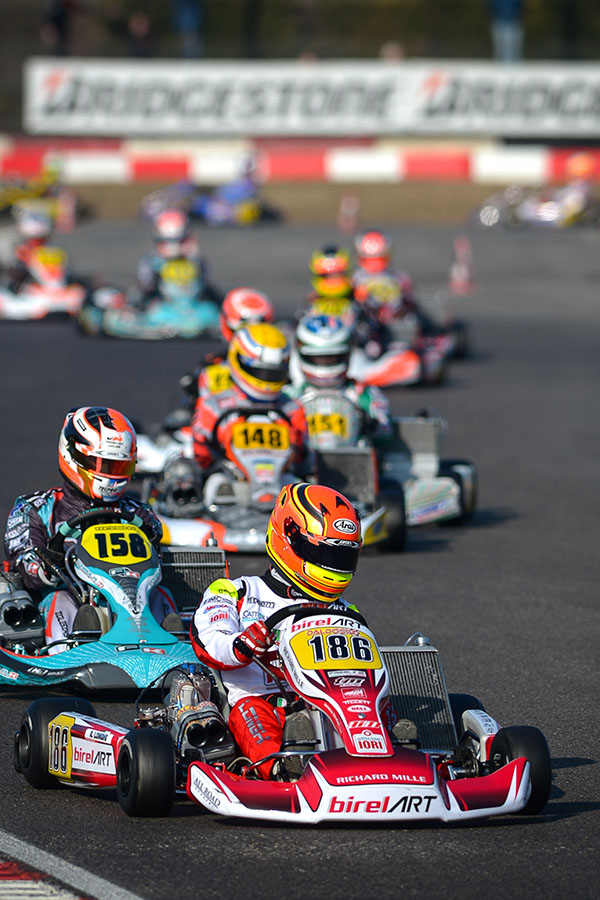 For the first competition of the 2017 season under normal conditions, the Birel ART Racing Team was able to demonstrate the quality of the work carried out during the winter. The Birel ART drivers and chassis showed very strong competitiveness in all the international categories during the Winter Cup thanks to the very efficient engines provided by TM Racing.

The Winter Cup is never an easy-to-manage event because of the large number of seasoned and enthusiastic drivers who participate and the specificity of the Lonato track. However the Birel ART Racing Team was eager to battle it out at this karting temple to test the fruits of the work done since the beginning of the season in a famous competition.

Morgan Caron, of Birel ART, takes stock of the weekend:

“It was very important for our team to be able to validate the options used under real racing conditions, the first two meetings of the year 2017 being held under in unusual weather. We can be satisfied with the work that has been done in a short time. First of all, our chassis demonstrated a very interesting level of performance at Lonato. I would like to congratulate all the staff of Birel ART and the technical staff of the racing team led by Rickard who have devoted themselves completely to reach this first stage.

“The collaboration recently started with TM Racing, whether directly with the factory or through the intermediary of Daldosso in KZ2, Machac in OK and GFR in OK-Junior, gives us all satisfaction.

“We performed well in the three international categories with several fastest laps in the OK and OK-Junior races, as well as regularly occupying the front of the KZ2 field with a Final 4th place finish. We now have a solid technical and human foundation to continue our work in this direction with confidence, in view of the important deadlines that will soon appear on the horizon.”

On the 1200m Lonato track, it was in the highest category, the KZ2, that the Birel ART drivers achieved the best results of the weekend. It was a great satisfaction for the whole team to give a KZ2 driver the chance to show off against the most experienced professionals of KZ throughout the weekend. Although he has not raced since October, Riccardo Longhi has found his mark at the wheel of his Birel ART – TM. He was always in the top four of the event in addition to a victory in the qualifying heats and one in his Super Heat. The KSW Birel ART Austria team took an active part in this development with Rick Dreezen, powered by Vortex, constantly fighting for victory in the lead group. Felice Tiene finished the meeting on a positive note thanks to his significant recovery of 19 places in the Final.

In the OK category, Caio Collet and Rasmus Lindh (Ricciardo Kart) also showed good speed with a good time in Qualifying for the Brazilian and a fastest lap in his Super Heat for the Swede. Lindh finished the Final in the top 10.

The young OK-Junior drivers also performed well during the event, as demonstrated by the fastest time in the Super Heat by Dexter Patterson.

All of the Birel ART Racing drivers are now well positioned to negotiate the next races with greater ambitions. The next event will take place on the first weekend of March at the 7 Laghi Circuit at Castelletto di Branduzzo for the second round of the WSK Super Master Series.