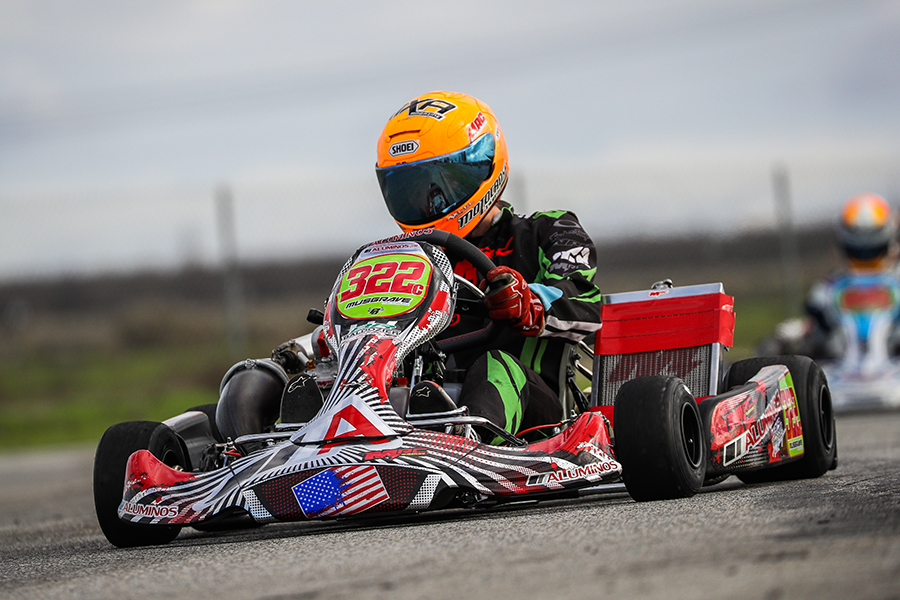 Three-time champion Billy Musgrave put himself back at the top of the S1 Pro class (Photo: DromoPhotos.com)

The 2017 race season is underway in Superkarts! USA competition with a busy few weeks for the organization. At the end of February is a double-header weekend featuring the opening round of the Texas ProKart Challenge followed by the inaugural SKUSA Pro Tour WinterNationals at the NOLA Motorsports Park in New Orleans. Up first, however, was the start of the California ProKart Challenge – the flagship regional program – beginning its lucky 13th season with the annual visit to the Buttonwillow Raceway Park on February 10-11. The two-day event was dampened by rain all day for Friday’s practice before things dried out on the Saturday race day. Nearly 190 drivers in the 11 categories took part in the event to begin the new season, and the on-track action featured returning victors, first-time winners, and a strong class of graduating drivers moving up to the next level. 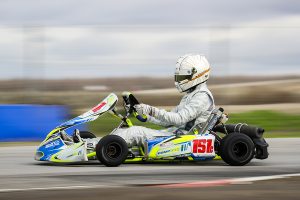 2016 X30 Senior champion Nicky Hays put himself at the top of the championship standings with victory in Buttonwillow (Photo: DromoPhotos.com)

Nicky Hays used two victories in the second half of the 2016 season to claim the series championship. The defending Formula Works/CompKart X30 Senior champion put in a solid opening weekend to start off 2017 with a win. Hays was one of two drivers to drop below the 50-second mark in qualifying, posting fast time of the session (49.876). Hays led all 10 laps of the opening heat race, and was put to the test in the second moto. On the opening lap of Heat #2, Hays was shuffled back to the 11th spot, with Stepanova Nekeel leading the 10 laps to score the race win. Hays was able to work his way up to fourth by the checkered flag, putting himself in position to challenge in the main event. Nekeel showed the way early in the shortened 15-lap race as Hays worked past Brenden Baker and Phillippe Denes. Into second on lap seven, Hays slipped around Nekeel for the lead on the following lap. Hays pulled away in the second half of the race to claim the victory by a 2.3-second margin. Baker advanced to second, pushing Nekeel to the third step of the podium. Andrick Zeen moved up to fourth, with Denes placing fifth.

A three-time series champion, Billy Musgrave is the measuring stick at the California ProKart Challenge in terms of shifterkart competition. Like Hays, Musgrave began his 2016 title defense in the Vemme Kart S1 Pro Stock Honda class with a near sweep of the 2017 opening round. Qualifying was the only session Musgrave did not finish at the top of the results sheet, with S1 rookie Hunter Pickett laying down the quickest lap of the timed session (50.158). Musgrave was second, with the top-five of the S1/S2 group all within a tenth of a second. The holeshot in Heat #1 gave Musgrave the win, as he led all 10 laps. Another holeshot and consistent laps put Musgrave out front by over three seconds in the second heat race. Pickett kept things close in the 15-lap Final, posting the fast laps of the race. The S1 rookie was unable to work past Musgrave, as the defending champion scored the victory. Former S2 title winner Carter Williams completed the podium, with Brian Keck and Hunter Kelly completing the top five. 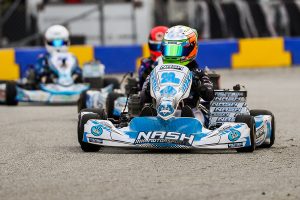 Trey Brown is entering his third season in the Junior ranks, opening up 2017 with a victory in the Ryan Perry Motorsport X30 Junior division. It was a near sweep for Brown – who jumped into the kart following a broken collar bone in early January – as qualifying was the only blemish on his day. California PKC rookie Matt Winfrey was the driver to post the fast lap in the session (53.972) ahead of the 31 other drivers, as Brown found himself in the seventh position. Brown climbed his way up in the opening heat race to reach the first position by lap eight, scoring the race win. The second heat was controlled by Brown, leading all 10 laps to secure the pole position for the main event. Brown made it a wire-to-wire victory in the Final, scoring his first class win since April 2015. The fight for second went to Junior rookie Dominic Gorden, with Kameron Perry landing on the podium in third for his first time. Tomas Mejia moved to fourth on the final lap, with Junior rookie Jace Denmark-Gessel finishing fifth.

It was another near sweep in the 25-driver Outsource Utility Contractor Corporation Mini Swift category by class rookie Kai Sorensen. The 2016 SKUSA Pro Tour and California PKC Micro Swift champion is making the move up to the Mini division for 2017, opening up his rookie season with victory. Qualifying was led by Daniel Inzunza with a fast lap of 55.552. Jonathan Portz was second with Sorensen in the third spot. The top two fought for the lead early on in Heat #1 until Inzunza secured the spot. Sorensen was up to second by lap five, and was able to complete a last lap pass for the race win. Inzunza got the jump on the rookie to begin Heat #2, leading the first nine laps. Another last lap pass awarded Sorensen with the race win and main event pole position. Rylee Martinez joined the top two in a three-driver fight for the main event victory. Inzunza led the first 11 laps as Sorensen and Martinez sorted out the lead challenger position. Sorensen jumped to second at the white flag, and for a third time, completed a pass for the lead on the final circuit, edging out Inzunza at the checkered by 33 thousandths of a second. Martinez was a close third, but was penalized for advancing positions after the commitment cone during the pace lap. That promoted Portz to the third spot on the podium ahead of Dustin Salaverria and Joey Brienza. 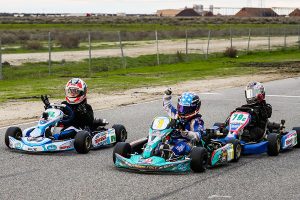 Kai Sorensen edged out the competition for the victory in Mini Swift (Photo: DromoPhotos.com)

The Nash Motorsportz S3 Novice Stock Honda division continues to grow with more drivers being introduced to shifterkart racing throughout California – welcoming 18 drivers to the season opener. Anthony Fontana was able to win the opening round of the season in his series debut. Carey Jonker was the top driver in qualifying, just ahead of Evan Jonker, with Fontana placing third. Fontana got the holeshot over both, and was able to lead all 10 laps of the opening heat race before going wire-to-wire in Heat #2. Fontana was able to break away at the start of the main event, reaching the checkered flag first ahead by 1.6 seconds over Alieja White. Evan beat Carey Jonker for the final spot on the podium, with John Nielsen placing fifth. Jacopo Pizzinato was the lone contender in the Rolison Performance Group S5 Junior Stock Honda category.

The top three from the 2016 season in the Mad Old Nut/Mad Croc USA S2 Semi-Pro Stock Honda class graduated to the S1 division for this season, opening the door for new names to fight for race wins and the series championship. Kyle Wick won his only start in 2016, and opened up the new year with his second series victory in a hard fought battle all day. Wick came away with the fast time in qualifying, placing fourth overall in the S1/S2 race group. The opening heat race lasted just a few circuits before Wick was sidelined with a broken coil wire, allowing Aaron Aguirre to score the win over Gianfranco Casadei and Jason Pettit. The holeshot for Heat #2 went to Pettit as he led all 10 laps in class, as Wick knifed his way back up to third in class behind Aguirre. Pettit remained in the class lead through much of the 15-lap main event, until pressure from two S1 drivers gave Wick an opportunity to strike. On the final lap, Wick followed the two S1 drivers past Pettit, reaching the checkered flag first. Pettit settled for second, his third runner-up result in his seven California PKC starts. Aguirre rounded out the podium, with Robert Heck Jr. and Kol Bailey making up the top-five. 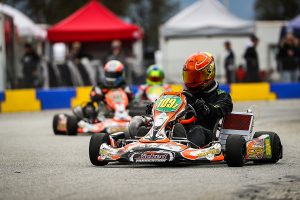 Kyle Wick scored his second S2 victory in as many starts (Photo: DromoPhotos.com)

Another solid race group made up the Mike Manning Karting S4 Master Stock Honda and Musgrave Racing Company S4 Super Master Stock Honda divisions – filled with last year’s winners and champions at both the CPKC series and SKUSA Pro Tour level. Defending S4 champion Alan Michel was awarded the victory to start out the 2017 season, with John Crow notching his first series win in the Super Master category. Robert Marks had a S4 sweep in progress, having topped the qualifying session and winning both heat races. The SKUSA Pro Tour S4 SM champion led all 15 laps in the Final for the provisional victory until officials handed him a two-position penalty for jumping the start. That gave Michel the victory and put Rob Logan into the second spot, as Marks received the third place trophy. Nick George finished fourth with Vivek Tandon in fifth. Crow showed the way in S4 Super Master once the racing began, jumping from P3 in qualifying to taking the race wins in Heat #1, Heat #2 and the Final. Top qualifier and three-time SuperNationals winner Jeff Littrell stamped his return to SKUSA competition with the fast time in qualifying, but slipped back to third behind PP Mastro in Heat #1. Crow would go on to lead Heat #2 and the main event wire-to-wire for his first series victory in the class. Mastro held on for the runner-up position while Streets of Lancaster Grand Prix winner Jonathon Allen placed third. Darrell Tunnell and last year’s series champ Ken Schilling completed the top-five. 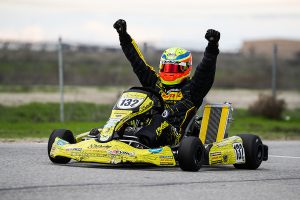 Victory for Nick de Graaf in X30 Master after a string of runner-up results in 2016 (Photo: DromoPhotos.com)

After coming close throughout all of last season, Nick de Graaf was able to claim the top step of the Phil Giebler Racing X30 Master podium. Three total podium finishes including two runner-up results was the 2016 record for de Graaf, who nearly swept the action during the opening round of 2017. Master rookie and veteran karter Jess Peterson negotiated the circuit best during qualifying, as the only driver to dip into the 51-second bracket – while de Graaf was second in the results. On the opening lap of Heat #1, de Graaf took the lead and never looked back, leading all 10 laps for the win before repeating in Heat #2. Luke Vasquez put in a challenge early on in the main event. However, de Graaf reclaimed the lead on lap five, and from there led the rest of the way for his first series victory. Peterson worked back up to second, with Travis Irving following him up to take third. That dropped Vasquez to fourth, while Jonathan Silva placed fifth.

It was a debut victory for Stephen Eisert in the PKS Kart Supplies Micro Swift class. Seventeen drivers took part in the opening round, with Eisert the top driver during race conditions. Logan Toke took top honors in qualifying before Eisert swept the two heat races and the victory in the main event. Enzo Deligny was the closest challenger, earning the runner-up finish. Austin Manka took the third spot on the podium, beating out North Carolina driver Caleb Gafrarar and Toke for the position.

The California ProKart Challenge is set to host Round Two on the legendary Streets of Willow course on March 31-April 1. More details on the event will be posted shortly. For more information on anything related to Superkarts! USA, please visit the website – www.superkartsusa.com and be sure to follow the Superkarts! USA Facebook page, Twitter and Instagram accounts – or call the SKUSA head office at 951-491-0808.