Nicholas d’Orlando Kicks Off 2017 On the Fast Track 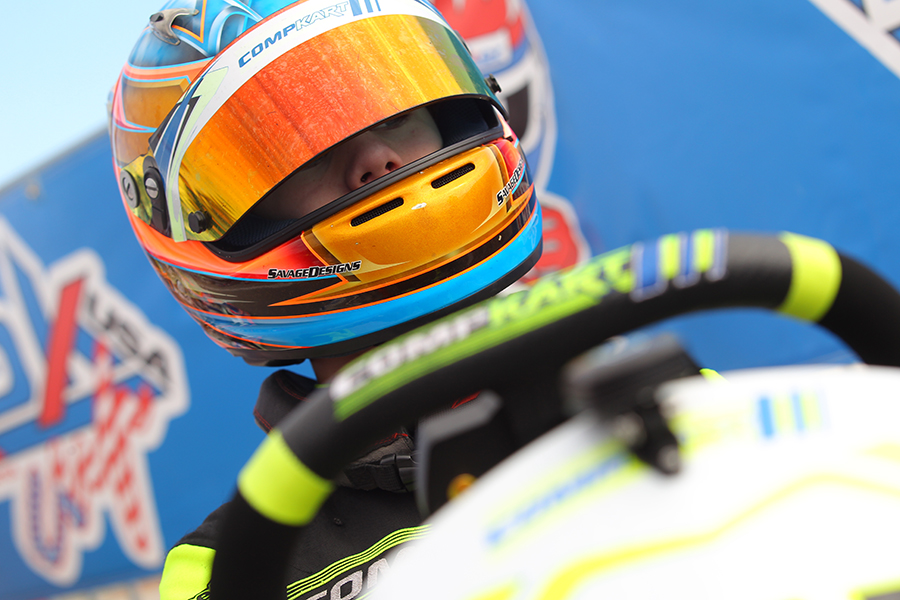 It’s that time… Drivers start your engines!   The 2017 season is officially underway and Nicholas d’Orlando, with his J3 Competition team, kicked off the year in sunny Homestead, Florida, for the first round of the Florida Winter Tour ROK Cup USA.  And this weekend, he’s back to the Sunshine State for Round Two in Palm Beach.

The Junior Rok grid at Round One in Homestead was one of the biggest grids of the weekend, with 41 drivers.  Starting out on the fast track near the top of the unofficial timers for the first two days of practice, and ultimately officially qualifying sixth, d’Orlando would follow up with slightly disappointing 7th, 14th & 6th place results in the three heat races, putting himself in a challenging 15th position for the start of the Pre-Final.   But the young sophomore proved he is always a contender and he wasted little time moving his way up the field early in the opening laps of the PreFinal event to put himself a little closer to striking distance in 4th place.

Now back up near the front to the start the Final amongst the talent of drivers such as Eduardo Barrichello (son of F1 legend, Rubens Barrichello) and Tyler Gonzalez, d’Orlando once again wasted little time to put himself within a podium position.  Barrichello checked out early which left the next pack to fight for themselves, and the battle for the final two podium positions came down to d’Orlando, Gonzalez and fellow veteran karter, Derek Carmenate. d’Orlando was one of the few drivers in the 41-driver field that kept pace setting fast lap times comparable to the race leader, but Gonzalez and Carmenate had set their sights on the podium step too.  The three battled it out changing positions numerous times in the 25 lap main event and d’Orlando simply ran out of time.  Ultimately finishing fourth and narrowly missing a step on the podium, d’Orlando and his J3 Competition team still remain confident that they have found the speed they were looking for to start the year, and it’s a great beginning to build on.

“Everything started out well and we were fast from the first session.”, said Nicholas d’Orlando. “But my sixth place qualifying position wasn’t the best spot to start us for the racing events.  But I got a really good start in both the PreFinal and the Final and it was a really good battle with Derek  [Carmente] and Tyler [Gonzalez]. I did all I could do to try to finish up with a podium finish but it just didn’t go may way. Overall though, it was a good start to the year and we know that we have the ability to run up front in the Junior Rok class.  The COMPKART is fast and I look forward to continue to develop the product and hunt for wins with J3 Competition.”

d’Orlando and his J3 Competition COMPKART team are ready for Round 2 of the Florida Winter Tour ROK Cup USA, this weekend February 10-12, 2017, at Palm Beach Karting in Jupiter, FL. For more information, you can go to www.maxspeedentertainment.com.