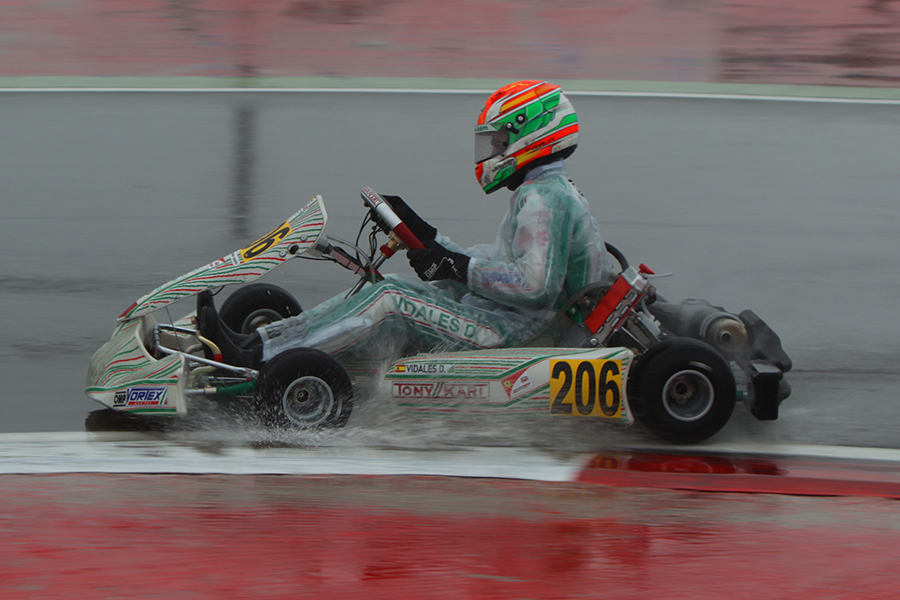 The WSK Super Master Series’ opening round saw us on the podium with David Vidales in the OK category. The race at the Adria Karting Raceway has been strongly featured by difficult weather conditions, with the rain that made the track adherence critical.

The precarious grip has been the dominant theme of the whole weekend. Despite this our four drivers have always run in the top positions since the qualifying heats in which Hiltbrand was hit only by Tonteri, also on a Tony Kart-Vortex chassis (KSM Racing Team). In the heats, run with rain tires only, Hiltbrand and Vidales led the race once each while Novalak has always finished second, gaining the first position in the grid of the final (B). Petecof has regularly been in the top ten, finishing the qualifying races with a good thirteenth place. In the two pre-finals the best drivers were Novalak, who finished third, and Vidales, sixth. Petecof took the twelfth place, gaining his entry to the final and further increasing his knowledge. The only thing out of tune came after the pre-final (A), with the exclusion of Hiltbrand due to the infringement of the “track limit”. The penalty has irremediably compromised the chance to take our driver in the final fight for the success. The final was marked by two multiple collisions in the first round, in one of which Petecof and Novalak were involved. The first had to retire, Novalak managed to get again in the race, although very late, going from the bottom to the final twelfth place. Excellent was the performance of Vidales, who, in addition to make the most of the good work with the team, took advantage of the penalties given to his two opponents. Therefore, at the end of the competition Vidales got on the podium (third position) and gained the fifth place in the provisional standings of OK category.

Marco Ardigò’s performance grew relentlessly and after the success in one of the heats, Marco finished the pre-final in second place. At the start of the final the chance to fight for the win went up in smoke due to a collision which cost to our driver a spin that forced him to a total comeback, and finished eighth. Alessio Piccini and Matteo Viganò left the final in the early stages, both because of a collision, but have nevertheless proved their worth on track during the heats and the pre-final.

Andrea Antonelli test on the wet track the new Neos, highlighting the qualities of stability and speed anytime during the Adria event. Antonelli led one of the heats and crossed the line of the pre-final (B) in third place, ending the good weekend with the fifth place in the final.

The next match for the Racing Team is not far and will see us working for one of the most traditional and attractive competitions of the starting season, the Winter Cup in Lonato, scheduled on February 16th to 19th.