Double Sodi Win at the Opening of the 2017 Season 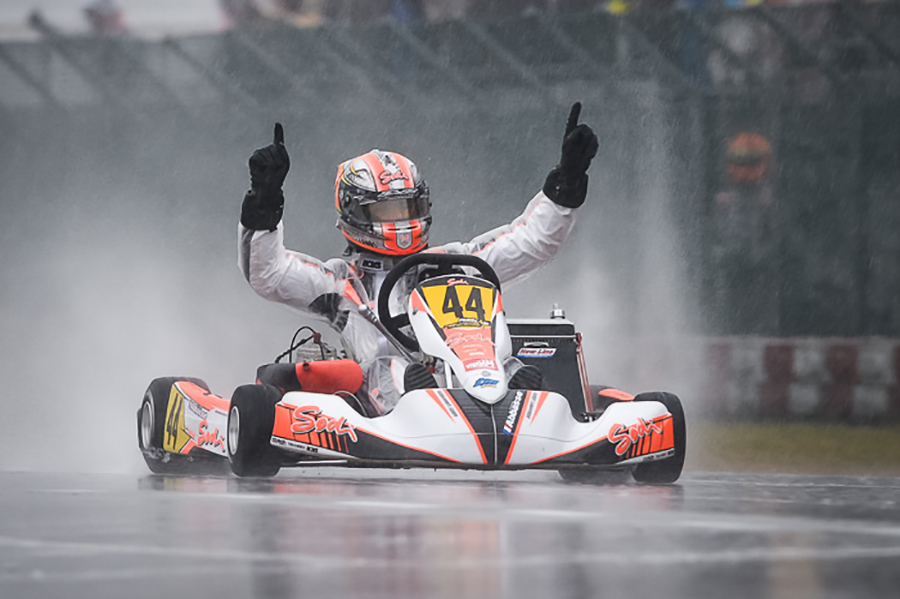 In very difficult weather conditions and in the presence of the elite of the world karting, Sodi has taken the top two places in the first competition of the 2017 WSK Super Master Series at Adria in KZ2.  With the Team CPB Sport, four Sodi drivers finished in the top 10, the best result of all the manufacturers officially entered in this top level championship.

Thanks to the work carried out by the entire team since Julien Dexmier’s arrival at the helm, and the increased involvement of the factory members, Sodi now ranks among the top teams in the world. The values of effort, will and cooperation that drive the French brand bear fruit in the Sodi Racing Team as well as in the Team CPB Sport.

Rarely have race conditions have been as difficult. The grip of the Adria track continued to change while always remaining precarious. From greasy or wet to heavy rain, the first meeting of the WSK Super Master Series posed constant challenges to every competitor. Only the Sodi chassis were able to occupy the front of the field with impressive consistency. In qualifying, three Sodis were among the top five. Five of the six qualifying heats were then won by Sodi drivers, twice each by Anthony Abbasse and Bas Lammers and once by Douglas Lundberg.

During the Prefinals, Lammers and Abbasse won with the fastest times and a comfortable lead by taking the option to fit only two new tyres – in order to keep a complete new set for the Final – unlike most of their rivals. The two drivers of the Sodi Racing Team then scored a superb double victory in the Final, almost 10” ahead of their rivals. Abbasse was once again the fastest on track, while Lammers was credited with the absolute fastest time of the weekend.

The supremacy of the drivers and the Sodi chassis was complemented by Lundberg’s 6th place and the young Leuillet’s 9th, coming back well in the Finals. These four drivers are also in the top 10 of the Championship with Abbasse and Lammers in the top two places, far ahead of the competition.

Team CPB Sport also completed an excellent performance this weekend, notably with the excellent performance of Douglas Lundberg and the beautiful rise of Tom Leuillet. The good understanding and the effective collaboration between the Official Team and CPB Sport make it possible for all Sodi drivers to benefit from an exceptional level of performance, as evidenced by the results.

As for the engine, TM Racing has confirmed its current status as a leader with its top-level engines from the beginning to the end of the competition.

Sodikart does not want to rest on the first laurels of the season. The preparation of the Winter Cup, which will take place in Lonato from 17th to 19th February, is already underway. Team members remain focused on their goals and ambitions to have the best equipment and the best team possible to reach the heights.