CRG, Jorrit Pex on the Podium of WSK Super Master in Adria 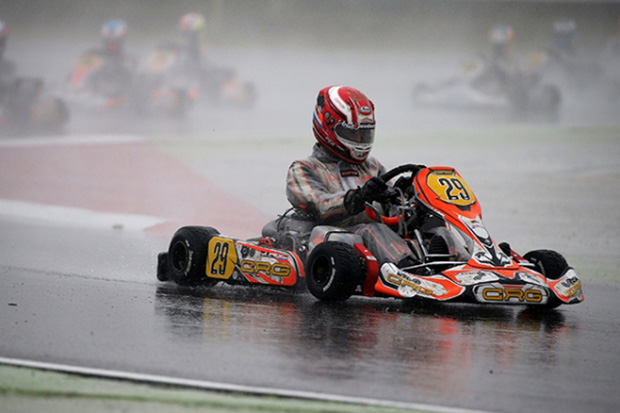 The first round of the WSK Super Master Series in Adria has been spoiled by bad weather. Jorrit Pex ended on the podium of KZ on CRG-Tm. The other CRG drivers stopped by incidents instead. Team Gamoto centered a one-two-three in 60 Mini.

The opener of the WSK Super Master Series at the Adria Karting Raceway has taken place in a very difficult weekend. The circuit was soaked with unceasing rain during the three days of the event and in the final it was close to impracticable conditions.

CRG obtained positive results in Adria, but a different weather could have ended with a better result for the drivers of the Italian outfit that is well represented in all categories.

JORRIT PEX ON THE THIRD STEP OF THE PODIUM IN KZ

The strong Dutch driver Jorrit Pex managed to secure another podium for CRG in KZ on CRG-Tm, at the end of a final that has been made chaotic by the heavy rain. He put in a bold race and claimed the third step of the podium, as did one week ago at the WSK Champions Cup when Jorrit Pex closed his effort behind his brother Stan Pex and Flavio Camponeschi. This time around the top two went to Anthony Abbasse and Bas Lammers.

Regarding the other CRG drivers, Flavio Camponeschi had to settle for P14 after the eighth place in the Final, one week after the mentioned great performance. Paolo De Conto suffered a series of problems in Prefinal and Final and had to retire due to a failure to the drive chain. Alessandro Giardelli also had to retire, but he was happy on finding his place among the finalists despite being at the debut in the shifter category, as the British driver Taymour Kermanshahchi. Stan Pex had to retire due to an incident in the opening lap after closing the Prefinal in P2. Similar fate also for polesitter Simo Puhakka.

Jorrit Pex: “Difficult conditions today for everyone, I struggled a bit as but I think most of the drivers did, and in the end I am really happy because we are back on the podium again. Two races and two podiums, we keep going and try to go to higher steps instead of third. The start of the year is good and we can to do even better in the next races”

Several contacts and spins characterized the race of CRG drivers in OK, after the great speed shown in qualifying. Dennis Hauger – fourth in Prefinal, managed to cross the finish line only in 19th, while Michael Rosina was 21st and Davide Lombardo 23rd. The Spanish driver Kilian Meyer, the British Callum Bradshaw and Matteo Nannini could not qualify for the final stages due to some problems in the Prefinals.

Team Morsicani’s Leonardo Bizzotto has been the best of CRG drivers in the Final of OK-Junior and crossed the line in fifth place. The Spanish driver Ayrton Fontecha was handed a 10s time penalty ending his debut race with the works team in P20, while the Malaysian Nik Zamir Zakwan was 22nd. The French Gillian Henrion had to retire after he confirmed the good performance shown in qualifying and in the heats with the 10th place in Prefinal. A similar fate characterized the race of the Spanish driver Jose Gomez (12th in Prefinal). The French Evann Mallet and the Brazilian Gabriel Bortoleto could not qualify for the Final instead.

Great results for CRG arrived from 60 Mini thanks to the excellent performance of Team Gamoto’s drivers, that managed to lock out the podium of the Final. The closing race was in fact won by Fabio Spina, who repeated the victory scored at the WSK Champions Cup. Luca Giardelli secured P2 after leading the race early on, while Malaysia’s Adam Putera completed the podium. The top three drivers were all on CRG-Tm.