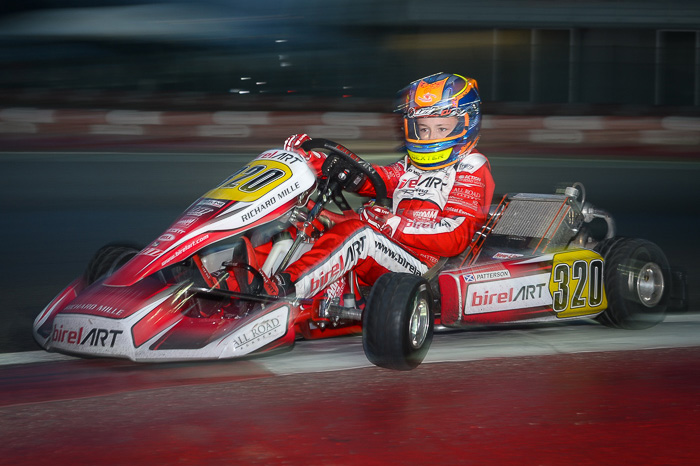 With the end of the first event of the WSK Super Master Series, three weeks of intense work at the Adria Karting Raceway are coming to an end. The Birel ART Racing Team will be able to return to its base in Lissone to use all the data collected and prepare for the rest of the season. The last race weekend was particularly challenging for both men and machines due to persistent rain and very low temperatures. Good performances have been achieved in all categories despite particularly difficult conditions, and the team is very motivated to continue in the same way.

It was far from the ideal weather for karting this weekend at Adria. It is extremely rare not to use slick tyres throughout an event as was the case here. More than the rain itself, the continual changes of grip and the cold of the beginning of February complicated the work for the technicians and drivers at the beginning of the season.

“We had the satisfaction of being competitive in both OK-Junior, OK and KZ2,” declared Rickard Kaell Franchini, the head of the competition team. “In an important phase of structuring and development like we are in now, these first good performances are important. Of course, a renowned brand like Birel ART aims above all for victory, but at this stage of the season we already have confirmation that we are working in the right direction. Thanks to the very productive last few weeks, we will be able to have new developments as of the Winter Cup.”

In this first meeting of the WSK Super Master Series of 2017, the young Briton Dexter Patterson showed excellent potential while he was racing in only his second race in OK-Junior. After setting the 4th fastest time during qualifying practice, he then won one of his four heats before crossing the finish line in the 4th place. Pietro Delli Guanti’s 9th place also confirmed the competitiveness of the equipment. Caio Collet has made a good start of the season in OK with an interesting 6th place under the chequered flag of the Final, while Rasmus Lindh had a good run with 13 places gained after a complicated start. Alexander Dahlberg and Marijn Kremers were also convincing in KZ2.

“I want to congratulate our drivers who braved these extreme conditions,” continued Rickard Kaell Franchini. “All of us would have preferred to have a dry run from time to time to put on the slicks, but each one courageously fulfilled his role. In these extreme conditions, it is truly regrettable that the numerous penalties for dropped spoilers too often affected the results, unrelated to bad behaviour on the track.

We will line up a team of seven drivers in less than two weeks at Lonato for the Winter Cup with Pietro Delli Guanti and Dexter Patterson in OK-Junior, Caio Collet, Rasmus Lindh and Australian newcomer Jace Matthews in OK and Felice Tiene and Riccardo Longhi in KZ2.”