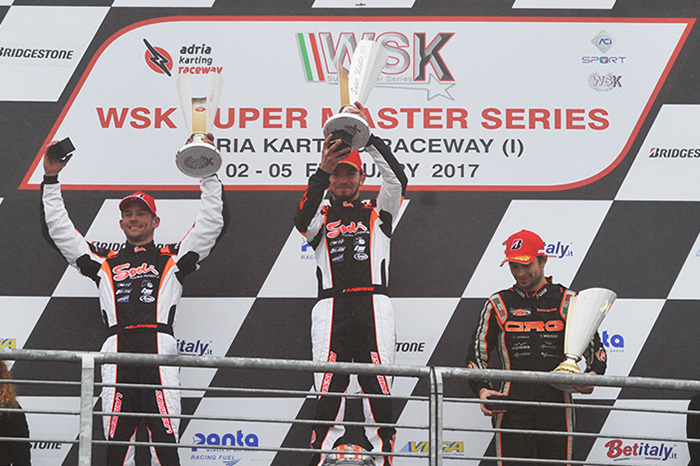 Stronger than the harsh weather condition: the 243 drivers of the WSK Super Master Series, at its season-opener round, defeated the incessant rain and brought home the first results for their standings. At the Adria Karting Raceway, international karting showed once again how spectacular and gripping its wet races can be. The second round at the weekend of 5th March in Castelletto, near Pavia.

The Belgian Ulysse De Pauw (Kosmic-Parilla-Bridgestone) and the Italian Lorenzo Travisanutto (Zanardi-Parilla) won the Prefinals hands down and then, in the Final, it was the former to prevail. De Pauw gained an early lead and pulled away while, behind him, Victor Martins (Kosmic-Parilla) managed to steal the runner-up position from Travisanutto. However, the French was hit by a penalty after the end of the race for his misplaced front-fairing. So, it was Travinasutto who eventually scored the second position behind De Pauw; third position for the Spanish David Vidales (Tony Kart-Vortex).

Anthony Abbasse is the king of the wet track in KZ2

The French Anthony Abbasse (Sodi-TM-Bridgestone) kept at bay the rivals of his own team, starting with the Dutch Bas Lammers, after they had won the A and B Prefinals. Abbasse won the Final ahead of Lammers, while the Dutch Jorrit Pex (CRG-TM) scored the third position. In the battle for the fourth place, the Czech Patrik Hajek (Kosmic-Vortex) finally managed to beat Matteo Zanchi (Wildkart-TM). Zanchi placed ahead of the Swedish Douglas Lundberg (Sodi-TM).

Great surprise in the OK Junior Final, when the Russian Pavel Bulantsev (Tony Kart-Vortex-Vega) and the Italian Leonardo Marseglia (Zanardi-Parilla) – the two frontrunners – were forced to pull over. Their retirement made way to Andrea Rosso’s (Tony Kart-Vortex) victory; he and Jack Doohan (FA Kart-Vortex) passed the Russian Ilya Morozov during the first laps and the three drivers crossed the finishing line in this order.

Alfio Spina beats all in 60 Mini

The Italian Alfio Spina (CRG-TM-Vega) took over the leadership from his fellow countryman and team mate Luca Giardelli during the early stage of the 60 Mini Final. Spina, finally, won a hard race on a slippery track. Third position for the Malaysian Adam Putera (CRG-TM), who overtook the Italian Andrea Antonelli (Tony Kart-Vortex).