Nitro Kart is excited to announce the cadet driver chosen for their 2017 scholarship program. With many talented cadet drivers eligible for the award, team owner Nick Tucker and a karting panel of experts within the industry have chosen Ashton Chilton as the inaugural winner. The scholarship includes kart, tent, transport, driver coaching, race suit, and mentorship. The young driver from Key Largo, Florida has already secured six championships and a vice championship, along with many race wins and podium finishes, in his short career. Ashton will be competing for the Nitro Kart team in the SuperKarts! USA (SKUSA) Pro Tour and the World Karting Association (WKA) Manufacturers Cup for the 2017 season.

Ashton got his start in karting in 2012 when he began racing Kid Karts. He fell in love with the sport right away, learning and improving quickly at such a young age. In 2013, he moved up to the Rotax Micro Max division, racing local club races at Homestead Karting. Ashton also competed in the Florida Karting Championship Series, where he finished sixth in the championship points, a great feat for his rookie season in Micro Max. 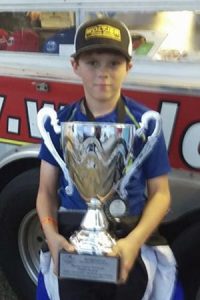 In 2014, Chilton completed his second season in the Florida Karting Championship Series, once again competing in the Micro Max division. He finished fifth in the championship, continuing to improve every race. He continued to race the local series at Homestead Karting as well. Adding more competition dates to his schedule in the new race season, Chilton also raced the Florida Pro Kart Series in 2014, running in the Mini Swift category. He finished vice champion in this series, proving that the increased seat time was paying off. To finish the season, the young driver raced the Fall Championship at Palm Beach Karting in Micro Max, winning his first championship.

2015 brought even more accomplishments for Ashton, as he continued to add races into his busy schedule. He began the year racing the Florida Pro Kart Series in Mini Swift, securing the championship for the series. He also raced the ROK Cup Florida, finishing tenth in the competitive championship standings. Ashton added another championship to his resume, as he was crowned champion in the Mini ROK division at the Fall Championship at Homestead Karting. He finished his season out competing at Daytona Kart Week, racing in the Pro Swift Sportsman class. He ran top-five throughout the week, showing great speed and skill at his first Kart Week appearance.

Ashton’s passion for the sport grew even more in 2016, adding two more series to his schedule for the season. He ran the Florida Winter Tour for the first time in 2016, earning one top-five finish and a sixth place in the championship. Ashton also raced the ROK Cup Florida, scoring one top-five and two top-ten finishes, ending the championship in fifth. He raced the South Florida ROK Cup Championship for the first time, winning the championship and a ticket to the ROK Cup National Final in Orlando. Ashton had the opportunity to expand his karting experience even further, racing at New Castle Motorsports Park and Pittsburgh in the Pro Swift Sportsman class. In the fall of 2016, he raced the Fall Championship at Palm Beach Karting, winning every race and taking the championship in Mini ROK. Ashton returned to Daytona Kart Week to close out his season. On day one, he swept the field from qualifying to the final, leading from flag to flag in each race. He remained on top for most of the day on day two, coming in second in the final. Ashton was crowned Daytona Kart Week Champion in the Pro Swift Sportsman division, one of his biggest accomplishments to date.

The 2017 season will bring even more racing for Ashton. He has started off his season at the Florida Winter Tour ROK Cup, earning second place at Homestead in Mini ROK. When he is not on the track, Ashton is working hard in school. He is currently in the sixth grade and is an honor student. In his spare time, he enjoys Taekwondo, cross fit, and fishing on his boat. Ashton aspires to one day be a professional racecar driver. Ashton is looking forward to working with Nitro Kart for the 2017 season, and is excited to see the results they can achieve.

For more information on Team Nitro Kart or the Nitro Kart product line, please visit them online at Nitro-Kart.com or contact Nick Tucker at 704.818.7868 or via e-mail to MWracer70@aol.com.