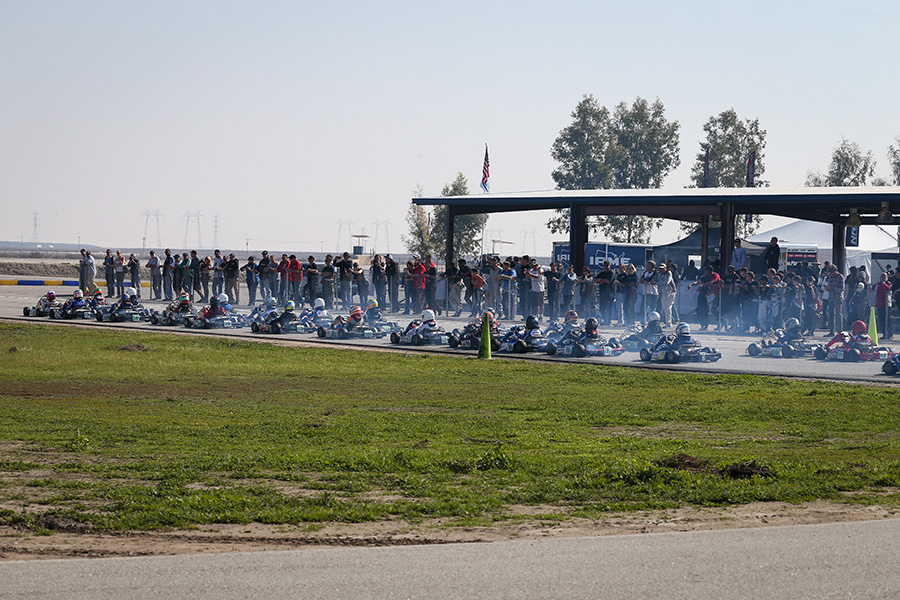 Another season of record fields is forecasted for the upcoming season of the California ProKart Challenge (Photo: dromophotos.com)

Superkarts! USA has been busy preparing for 2017 since the success of the 20th SKUSA SuperNationals held the week prior to Thanksgiving in November. The month of December was spent closing out the Las Vegas spectacular and setting the stage for what will be another busy racing season in 2017. With no large events in December or January, the organization is ready to hit the race track with the start of the California ProKart Challenge. The SKUSA flagship regional program will embark on its 13th season when teams and competitors head to Buttonwillow Raceway Park on February 10-11.

“We are set for another huge turnout to open up the season,” stated SKUSA CEO and California ProKart Challenge founder Tom Kutscher. “In 2016, we nearly broke the 200-driver mark at the opening event, setting a new record. There have been reports of 120 racers taking part in practice days at Buttonwillow last weekend, so we are expected to come close to, if not break last year’s mark. It’s amazing to see these numbers at our regional level, as they can eclipse the numbers set by other national and international events held in the US right now. Our paddock map is almost full, entries continue to come in by the hour, and the excitement is building for another opening weekend of Superkarts! USA action.”

The 2017 California ProKart Challenge remains at 11 categories, featuring the six Stock Honda divisions and the five IAME categories. The S1 Pro/S2 Semi-Pro categories continue to showcase the top shifterkart drivers in the region. S3 Novice and S5 Junior serve the newcomers to the sport at the regional level. The combination of the S4 Master and S4 Super Master race group is entering its third year at the California PKC. 2017 marks the continued support of the IAME engines in the five ‘TaG’ divisions, with record numbers expected in all for the upcoming year.

With the new season just around the corner, SKUSA is also thrilled to announce that it has confirmed all of its class sponsors for the 2017 California ProKart Challenge.

The 2017 California ProKart Challenge provides six events at six unique facilities across The Golden State as a year of returns for the program. Buttonwillow Raceway Park has served as the opening event dating back to 2012, and continues that streak. The second event of the California PKC program is pushed later into the winter period thanks to the inaugural WinterNationals for the SKUSA Pro Tour. Round Two of CPKC is set for the Streets of Willow circuit at the Willow Springs International Raceway. The 1.8-mile course provides a different aspect of the sport, making a return to the series for the first time since 2011. The month of May is reserved for the annual SpringNationals, set to take place at the Simraceway Performance Karting Center in Sonoma. Many of the California PKC competitors are scheduled to take part. Round Three takes competitors and teams to the popular CalSpeed Karting Center as part of the California PKC for the first time since 2010. Return trips to Santa Maria Kart Track in and Monterey Bay Karters facility begin the second half of the season, with the finale remaining at the two-day Streets of Lancaster Grand Prix.

Registration remains open for the first round of the California ProKart Challenge at Buttonwillow. The deadline for online registration for the event is Monday, February 6 at midnight – with the discounted price of $325 for entry and stamped race tires. Move-in for Round One of the California PKC begins on Thursday afternoon, February 9. On Friday, the California PKC registration desk opens at 7:00am, with the official practice day beginning on track at 9:00am, running until 5:00pm. There is a nominal fee of $35 for a reserved pit spot and $50 for overnight camping at the track (as a flat fee for up to 3 total nights). Attendees are encouraged to reserve space now as spots are filling up fast. Competitors and spectators will need to pay the $10 per person gate fee upon entering the facility. Complete race and venue information, along with a tentative weekend schedule and host hotel information, can be found at the California PKC Event Page.