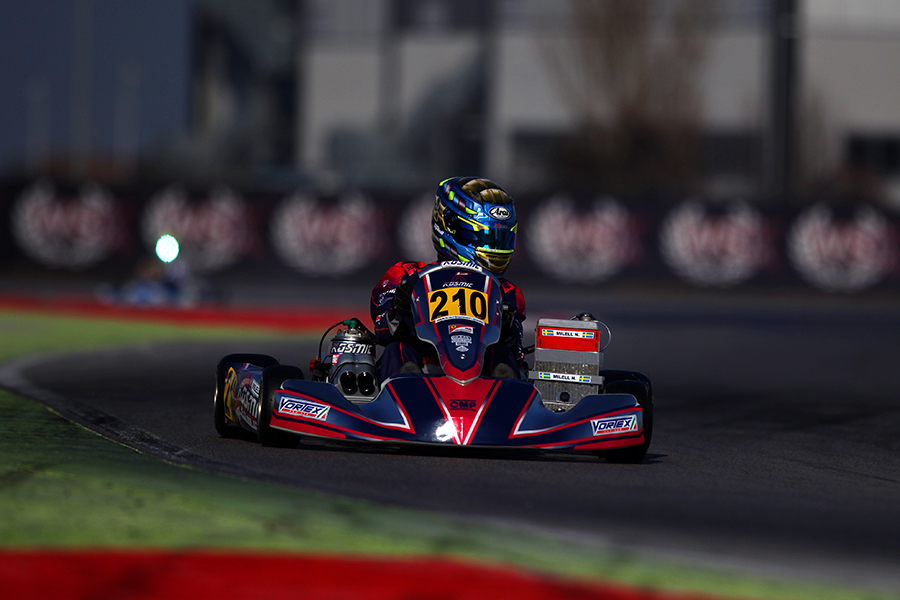 At the Adria Karting Raceway our Team faced the first competitive 2017 event, the WSK Champions Cup. The performance was very satisfactory, although the seasonal debut of the Racing Department was not really supported by the good luck.

Especially in OK class, our Karol Basz, Noah Milell, Théo Pourchaire and Daniel Vebster have done a great job during the heats. Basz in the qualifying heats succeeded three times out of three, while Milell and Pourchaire closed, respectively, in the fifth and tenth place. Even in the two pre-finals our Mercury S chassis powered by Vortex engines shone, allowing Milell to win the A pre-final, signing the best lap, and Basz and Pourchaire to end in fourth position in their respective pre-finals (A and B) and Vebster to close sixth in his pre-final. The grand final disappointed the expectations, with Milell, best driver of ours, who finished off the podium in fifth place. Nevertheless, a Kosmic Kart was leader and got on the podium, the one driven by De Pauw (VKD Team), in third place. The total balance clearly showed that our chassis are competitive and can easily run at the top throughout the season.

Axel Bengtsson and Oliver Rasmussen made their debut with our colors and were able to enter in a constructive synergy with the Racing Department during the Champions Cup. In the next weekend, with the start of the Super WSK Master Series we will also see Patrik Hajek on track.

Roman Stanek, at his debut in the cadet class, raced with determination but missed the entrance into the finals due to a collision in the pre-final that cost him a penalty. To Stanek it was by the way a very good performance and a good first approach with the new category and the team, which will be valuable to our driver in the forthcoming Adria Karting Raceway event.