CRG: One, Two, Three in KZ2 at WSK Champions Cup 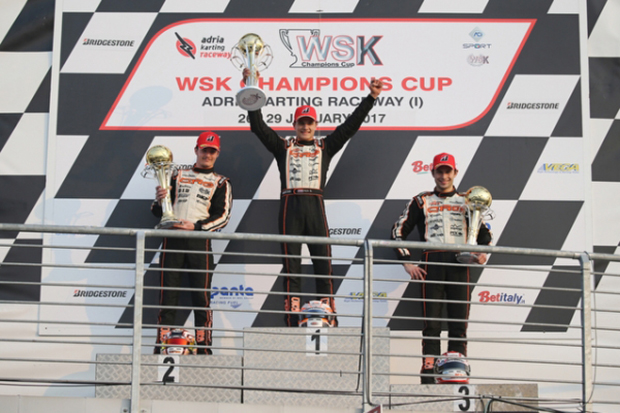 Stan Pex, Flavio Camponeschi and Jorrit Pex take it all in Adria’s KZ2. Gillian Henrion very good second on the podium of OK-Junior. CRG on top also in 60 Mini with Alfio Spina taking the win for Team Gamoto. CRG is definitely still up there. The Italian outfit started season 2017 as the unquestionable protagonist of the first racing weekend of the year: the WSK Champions Cup held in Adria. CRG has dominated KZ2, took a podium in OK-Junior and then another victory in 60 Mini with Team Gamoto.

CRG has claimed the whole podium of KZ2, with a top three led by the new enfant prodige Stan Pex, KZ 2015 European Champion Flavio Camponeschi and 2015 World Champion Jorrit Pex, all on CRG-Tm. CRG drivers have been cheered also by Max Verstappen, who has followed all the racing action in Adria.

After the pole position secured by Flavio Camponeschi, and the red-hot Prefinal when Stan Pex had the upper hand proceeding his brother Jorrit as Camponeschi was fifth, the three young CRG drivers have been unbeatable in the Final. This result confirmed the supremacy of the Italian outfit in KZ, as happened in 2016 when Paolo De Conto won the World Championship and Fabian Federer the International Super Cup KZ2.

Among the other drivers of CRG works team, Taymour Kermanshahchi was 11th and Alessandro Giardelli was relegated to P20 by a 10s time penalty.

Stan Pex, KZ2, first: “Really happy, it is great to start the year with a win. I think we have a good chance to run a strong season. The chassis has been perfect and the engine was really good as well, because all of us in top three were on TM, I am happy and I think straight to the next races. It looks good for this year.”

Flavio Camponeschi, KZ2, second: “It was good. Only in the Prefinal we had some small technical issues. We fixed them ahead of the Final and found the right balance I was therefore very fast. I am disappointed for the start, I had to get away from P5 due to the result of the Prefinal and I lost some ground trying and close in on the leader. At the end I was the quickest, I also set the fastest lap of the race. Had I started on a better position, I could have certainly fought for the victory.”

Jorrit Pex, KZ2, third: “The Final was quite a hard race for me, we tried something in the setup and it didn’t work out really well. The pace has been really good for the whole weekend, only in the final the pace was not good enough to take the win. I realized this quite early in the race and I knew I had to fight for the podium as the win was not possible anymore. That’s what I did.”

CRG secured another good podium in OK-Junior thanks to the brilliant French 2015 Champion of Cadet Gillian Henrion, who was at the debut in OK-Junior with the Italian Outfit. The French driver closed his effort in P2 behind the Russian Morozov. The German Marius Zug of team RL-Competition could have achieved a lot more, as he has been among the main protagonists of the weekend and won the Prefinal ahead of Henrion and Gomez, before ending fourth in a Final that he also led. Jose Antonio Gomez also put in a great race ending sixth, after a great Prefinal, while the Brazilian Gabriel Bortoleto was seventh. Another CRG protagonist could not shine as he would have deserved in OK-Junior though. The French Evann Mallet had in fact to retire from the Prefinal due to a spin, after being among the quickest in qualifying (second quickest) and in the heats, where he ended fourth.

An unespected retirement in Prefinal due to a problem to the spark plug stopped CRG’s Dennis Hauger run in OK. The Norwegian had been previously shining in his debut race as he set the pole position and completed very good races in the heats. CRG’s colors in this category were defended by the Finn William Alatalo, who ended in a good P14, and by Matteo Nannini, who run a good race but was slowed down by some setup problems first and by a 10s time penalty then, which made him slip down to the final P27. The victory in this category went to Pedro Hiltbrand, who secured the title of World Champion last year with CRG. Michael Rosina could not qualify in Prefinal.

The very young Alfio Spina on CRG-Tm run by Team Gamoto has scored a stunning victory in 60 Mini. His team mate Luca Giardelli was among the quickest and fought for the victory until the closing stages, crossing the line in P4. Top ten finish for Saood Variawa of CRG Holland, seventh, and Gamoto’s Adam Putera, ninth.

The next round of the season is the WSK Super Master Series scheduled in Adria (3-4-5 February). Some more CRG protagonists will join the squad in the occasion.