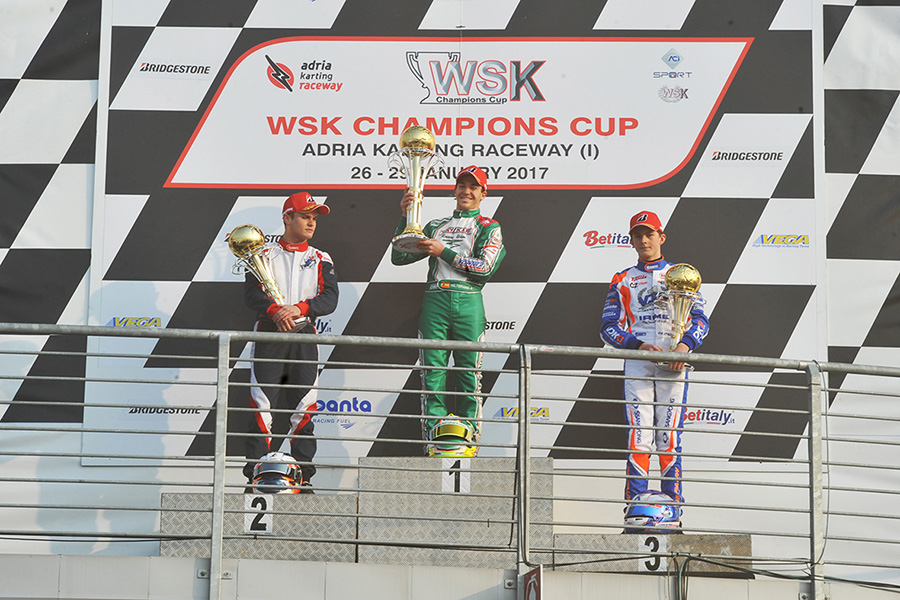 Superb finale for the WSK Champions Cup today at the Adria Karting Raceway. The single-round event took place one week before the WSK Super Master Series, scheduled next week on the same circuit. The races were an excellent stage for the new talents of karting who, together with more experienced champions, were the protagonists of a great show.

Pedro Hiltbrand (Tony Kart-Vortex-Bridgestone) had an excellent start. He arrived in Adria as the new World CIK-FIA Champion in OK and put in an excellent performance in the Final. He fended off the attacks of the Moroccan rookie Sami Taoufik (FA Kart-Vortex): they exchanged position several times but, in the end, Hiltbrand took the lead and kept it until the end, while Taoufik dropped back. So, the runner-up was Lorenzo Travisanutto (Zanardi-Parilla), who achieved a great recovery; behind him the Belgian Ulysse De Pauw (Kosmic-Parilla), who managed to finish third despite a poor start.

In KZ2 Stan Pex wins ahead of his brother Jorrit

The Dutch Stan Pex beat his older brother Jorrit (both on CRG-TM-Bridgestone) and won in KZ2 thanks to his flawless driving. Italian Flavio Camponeschi (CRG-TM) tried to close the gap with the leader but his efforts were useless and he finished third ahead of Jorrit Pex. Great performance for the Italian Matteo Viganò (Tony Kart-Vortex): he remained behind the frontrunners during the first laps but then he was forced to stop.

Ilya Morozov is the new talent of the OK Junior

Marius Zug (CRG-TM-Vega) led the Final during the initial stage in OK Junior but then it was the Russian Ilya Morozov who took centre stage, gained the head of the race and won the Final. His fellow countryman Pavel Bulantsev (both on Tony Kart-Vortex) managed to keep the second position nearly until the end, but the French Gillian Henrion (CRG-Parilla) was, eventually, the runner-up. Henrion overtook Zug and Bulantsev, securing the second position behind Morozov.

Alfio Spina is the surprise in 60 Mini

The Italian Alfio Spina (CRG-TM-Vega) managed to take over the leadership of the 60 Mini Final only in the end. He won ahead of his fellow countryman Gabriele Minì (Parolin-TM) at the end of a heated race. Also the Russian Nikita Bedrin (Tony Kart-TM) drove a fantastic last lap: he overtook the Italian Luca Giardelli (CRG-TM) and scored the last podium position.