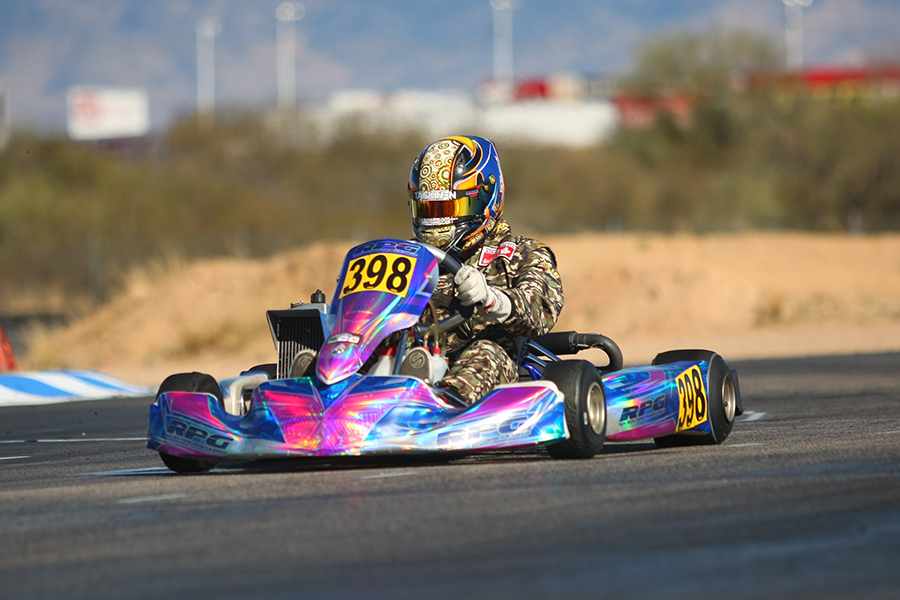 The final day of action went into the books in Tucson, Arizona, completing the first of three events for the 2017 Challenge of the Americas. Each and every time the Challenge visits the Musselman Honda Circuit, we are greeted with a weekend full of great racing. The start to the 10th season of the premier west coast winter series welcomed a number of new winners and quickly established those who will contend for the series championships. Canada scored two more victories in the three headline categories, with Senior rookie Matthew Taskinen winning a thrilling main event while Billy Cleavelin and Ryan MacDermid added another victory to their weekend to put them at the top of the point standings.

The Nash Motorsportz Senior Max class welcomed another first time winner in Canadian Matthew Taskinen. The Senior rookie was among the challengers, but never led throughout the day until the final lap. Bryce Choquer (PDB) set fast time in qualifying and was joined by Christian Brooks (FA Kart) at the front early on in the 17-lap Prefinal. A group of RPG drivers worked together and closed up to the leaders as Choquer and Brooks shuffled. Saturday winner Kellen Ritter (Kosmic) was the lead RPG driver, working past both Brooks and Choquer to take over the lead on lap 12, pacing the field the rest of the distance. Ritter was shuffled back to second to open up the main event, and continued going backwards. Battling for position, Ritter made contact and cut down his left rear tire, ending his chance at a double win weekend. Choquer led early until Brooks took the position on lap four, where he remained with Choquer on his bumper. Senior rookies Jacob Gulick (RPG / Kosmic) and Max Hewitt (CompKart) worked together, and closed in on the top two by the halfway point to make it a four driver fight for the lead. They shuffled around as Choquer and Gulick each took the lead at a time, allowing Taskinen to close up. On the final lap, Gulick led and was on the defensive line through the first two corners. Hewitt was second, looking for a way past. Hewitt went high entering turn four, and Choquer took the opportunity to dive inside of both for a three-wide result into the corner. All three pushed wide on the exit, with Hewitt well off in the dirt and Gulick dropping a couple wheels as well. This allowed Taskinen to go from fourth to first in one corner. The momentum gave him enough gap to run unchallenged for the checkered flag, giving Rolison Performance Group two wins in the category on the weekend. Choquer was able to fight off Brooks for the runner-up spot on the podium with Gulick just off in fourth. Hewitt recovered to end up fifth, his best finish on the weekend. 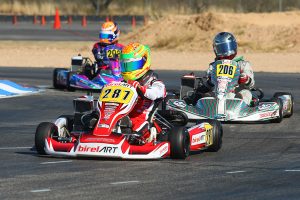 It is easy to start off the championship chase with a victory. Two is even sweeter. Canadian Ryan MacDermid came to Tucson, making his Challenge debut this weekend, opening up Saturday’s first round with a victory to stake his claim for a Rolison Performance Group Junior Max championship. The Cambrian Go-Karts / Birel ART driver swept the main events on the weekend to leave Tucson as the championship leader. MacDermid qualified second to Junior rookie Jak Crawford (Tony Kart). The two were the class of the field in the Prefinal. On the final lap, MacDermid ran a defensive line with Crawford getting anxious. The two made side-by-side contact coming out of turn five, with Crawford getting the worst of it. MacDermid was able to drive away to the win while Crawford could not refire his engine, dropping to 19th for the main event grid. The field was paced in the Final by three drivers as MacDermid was joined by Hannah Greenemeier (RPG / Kosmic) and Griffin Dowler (Tony Kart). Greenemeier jumped up to the lead by lap six and remained there for much of the race as MacDermid settled in second while Dowler was waiting in the wings. Lap 22, MacDermid took the lead and was able to hold on to the end for his second victory. Dowler worked past Greenemeier for the second spot. Crawford had an incredible recover to climb his way up to fourth, about four seconds back of the leaders with Alexis Apodaca (RPG / Kosmic) earning her best series finish with a fifth place performance.

The weekend played out nearly perfect for Billy Cleavelin, sweeping the final day of action in the Cambrian Go-Karts Masters Max division. Cleavelin (RPG / Kosmic) edged out two-time series champion Paul Bonilla (FTK / Birel ART) in qualifying by 96 thousandths. Cleavelin got the jump on everyone in the Prefinal to pull away to a seven-second advantage with Bonilla fighting with David Pergande (FTK / Tony Kart) for much of the race. The 25-lap Final was all Cleavelin, leading wire-to-wire with consistent fast laps to end up over three seconds ahead of Bonilla. Pergande ran third until Chad Wallace (Birel ART) was able to work past late, securing the final step of the podium. Local driver Jim Keiger (Zanardi) crossed the line in the fifth spot, but was assessed a three position penalty for contact. That promoted Blake Choquer (PDB) into the fifth spot. 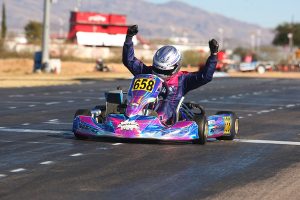 Since winning the 2016 Rotax Grand Finals Micro Max victory, Diego LaRoque (PDB) has gone undefeated in Rotax competition. The Arizona driver completed a weekend sweep by leading all the on-track sessions Sunday in the Brash Racing Mini Max division. After scoring the pole position, LaRoque drove away to a six-second advantage in the Prefinal. The Final, however, Josh Pierson (RPG / Nitro Kart) was able to stay on his bumper early, and able to challenge for the lead. At one time, Pierson led but LaRoque fought back, eventually keeping the lead before reaching the scoring loop. Diego settled in and was able to maintain the lead to the end for the victory. Pierson finished four tenths back in the second position, while Dustin Salaverria (Tony Kart) grabbed another podium finish. Joe Brienza II (Energy) drove to fourth with Jack Armstrong (Tony Kart) in fifth.

The weekend belonged to Sebastian Mulder in the Podium Karting Micro Max category. Earning his first victory on Saturday, Mulder (Benik) swept the day on Sunday to put himself at the top of the championship chase. Mulder secured the fast time in qualifying, however slipped to second on the opening lap of the Prefinal. Tyson Quach (CompKart) led the opening circuit until Mulder retook the position, driving away to the race win. Mulder then went on to lead all 14 laps of the main event, earning his second victory of the weekend. Parker Delong switched to a Benik after mechanical issues in the Prefinal, driving to the second spot over Quach with Graham Trammell (Kosmic) placed fourth.

Completing the weekend of double victors, Jason Campbell (DR Kart) notched another in the BBR Karting / Wallace Steel Shifter Masters division. Campbell swept the days action with no issues and never relinquishing the top position. Joe di Vito made it a DR Kart 1-2 result after Philip Serniak (CRG) retired on lap two of the final with a mechanical issue, moving Abraham Jones (CRG) to the third spot on the podium. 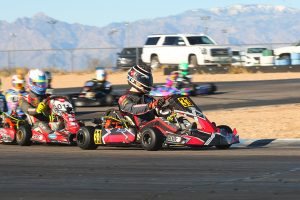 The APM Racing / M2 Image Solutions Briggs 206 race group completed their weekend with the third heat race and main event to close out the event. It was another great day of racing for the grassroots category, featuring a wide range of talent throughout the field. Dutch driver Nick De Bruijn was able to work together with his PDB teammate Bryce Choquer to claim the top two spots in the heat race. The two locked up again in the 18-lap main event. Henry Morse (RLV) made it three in the lead pack, until he lost the draft. The two PDB drivers went back and forth for the lead on the final lap, with De Bruijn able to secure the position heading down the long backstraight. De Bruijn took the victory and the $500 cash prize. Choquer settled for second, earning himself a free entry to the Phoenix round of the Challenge. Morse was tracked down by Noel Dowler (Tony Kart) and the top two Junior drivers Jalen Mack (RLV) and Josh Pierson (Tony Kart). Dowler was able to come away with the third spot, taking home a new set of MaxOne Green tires. Morse settled for fourth with Emon Fazlollahi (RLV) placing fifth. Pierson was able to come across the line as the top Junior driver, while Mack ended up second. He was handed a penalty for starting lane infraction, and then later refused tech. That promoted Timothy Trostel III (Tony Kart) to the second spot with Grant Langon taking the third spot.

The Challenge of the Americas resumes on February 24-26 as the program returns to the Phoenix Kart Racing Association in Glendale, Arizona.