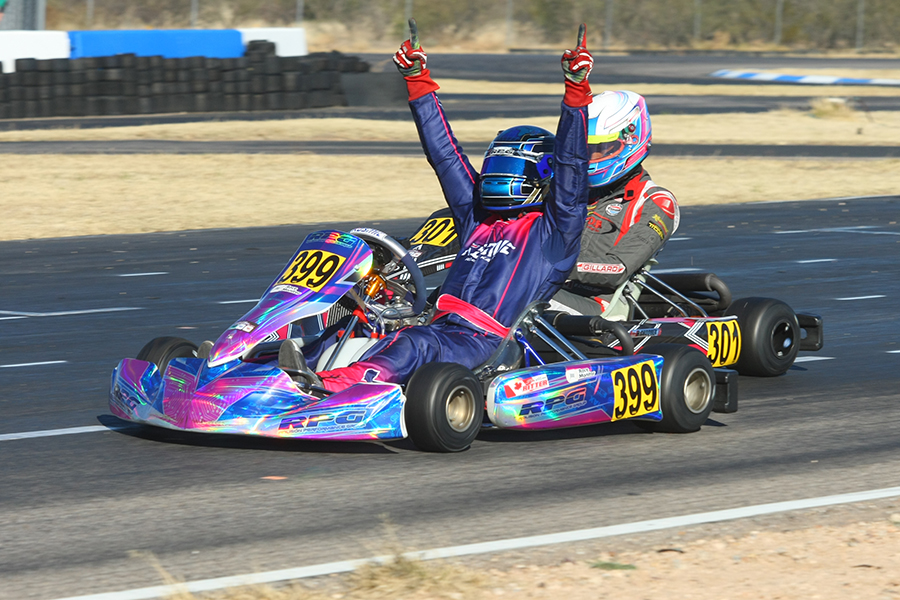 The 10th season of Challenge of the Americas opened up the racing Saturday as the first round of competition took place at the Musselman Honda Circuit in Tucson, Arizona. Competitors of Rotax, Honda and Briggs competitors took to the 7/10-mile course for the opening laps of the 2017 season. The weather was a bit warmer than Friday, however, still not the type of temperature you would expect while in the Arizona desert. Big wins by Canadians Kellen Ritter and Ryan MacDermid along with veteran Billy Cleavelin set the tone for the championship chases in the three headline categories.

The Nash Motorsportz Senior Max class appeared to belong to defending champion Christian Brooks. The FA Kart driver set fast time in qualifying as the only driver under the 50-second mark. Brooks led through the Prefinal, and was challenge late by a train of Rolison Performance Group drivers. Returning driver Blaine Rocha was the lead challenger following the Prefinal and started outside the front row. Brooks and Rocha swapped the lead early until Brooks took control of the position. A number of drivers made up the lead pack, as Brooks was unable to get away from the field. Rocha was swallowed up by the group and he eventually retired early. The lead group was filled with a number of drivers, including former winner Bryce Choquer (PDB) and last year’s vice-champion Kellen Ritter (RPG / Kosmic). The trio led the majority of the 25-lap main event, with numerous lead changes up until the final lap. Ritter stood strong to position himself into the top spot with solid maneuvers over Brooks after hard side-by-side racing. Choquer followed him through but was not close enough on the final circuit to challenge for the lead. Ritter held on to secure his first major victory to begin his sophomore Senior season. Brooks held on to finish third over Senior rookie Jacob Gulick (Kosmic) with Noel Dowler (Tony Kart) placing fifth to put three Canadians inside the top-five. 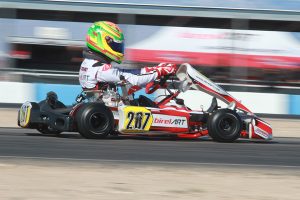 It went down to the wire in the Rolison Performance Group Junior Max category with a number of drivers in contention. Canadian Ryan MacDermid (Birel ART) set the fast time in qualifying, while it was Junior rookie Jak Crawford (Tony Kart) that claimed the Prefinal victory. The main event was a fight early on with Crawford, Hannah Greenemeier (Kosmic) and MacDermid leading. Canadian Griffin Dowler (Tony Kart) took a turn as well, before MacDermid was able to secure the lead position. The 2016 Rotax Grand Finals top qualifier was able to hold on to the checkered flag to earn his victory in his first Challenge start, racing under the Cambrian Go-Karts tent. Crawford placed runner-up with Greenemeier in third. Contact between Greenemeier and Dowler sent the Canadian off at turn one, and out of the race on 14. Grant Langon (Tony Kart) crossed the line fourth, but was removed from the results for a tech infraction. That promoted Brash Racing / RPG driver Cash Tiner (Tony Kart) into the position, completing a recovery from spinning on the opening corner of the Prefinal. Everest Fedler (Tony Kart) completed the top-five.

There is no question that Billy Cleavelin is among the top Masters drivers in the country. The Cambrian Go-Karts Masters Max main event belonged to Cleavelin. Starting 11th after a mechanical issue put him on the sidelines in the Prefinal, the Rolison Performance Group / Kosmic pilot advanced his way forward quickly, reaching the second spot by lap five, and cutting into the lead of the top qualifier / Prefinal winner Paul Bonilla (FTK / Birel ART). Cleavelin posted fast laps, and was able to work past Bonilla quickly, driving away to a three-second advantage. Bonilla drove to second with Blake Choquer (PDB) placed third in his Challenge Masters debut. Chad Wallace (PDB) stood strong to hold on to the fourth spot while David Pergande (FTK / Tony Kart) ended up fifth. 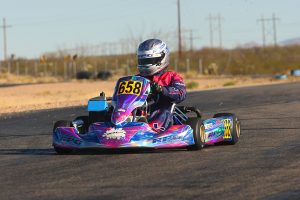 Sebastian Mulder became a first-time Challenge winner in the Podium Karting Micro Max division. Mulder (Benik) was able to pull away in the main event to score the victory following a fast time in qualifying. Parker Delong (PDB) won the Prefinal after securing the top position on the final circuit over Mulder and Tyson Quach (CompKart). The trio were close early on in the main event until contact between Quach and Delong allowed Mulder to get away to a 12-second advantage. Delong placed second with Quach in third until a penalty dropped him down to fourth, moving Graham Trammell (Kosmic) to his first Challenge podium.

Eighteen drivers made up the APM Racing / M2 Image Solutions Briggs & Stratton 206 race group, including Senior and Junior drivers. The best racing on the day belonged to category that held two heat races on the day. Blake Choquer (PDB) posted the fast time in qualifying while Henry Morse (RLV) came away with the win in Heat #1 and teammate Nick De Bruijn (PDB) securing the top spot in Heat #2. Jalen Mack was the top Junior driver in the group, finishing the highest among the younger drivers in both heat races. The category continues on Sunday, with a third heat race to set the grid for the main event.

Jason Campbell paced the BBR Karting/Wallace Steel Shifter Masters field for most of the day. After securing the fast time in qualifying, Campbell (DR Kart) was leading in the Prefinal until a mechanical issue put him on the sidelines early. Philip Serniak (CRG) drove to the win. Campbell fought back in the main event to put himself into the lead, driving away to 18-second advantage in the main event for the victory. Serniak drove to second over Abraham Jones (CRG) and Joe di Vito (DR Kart).