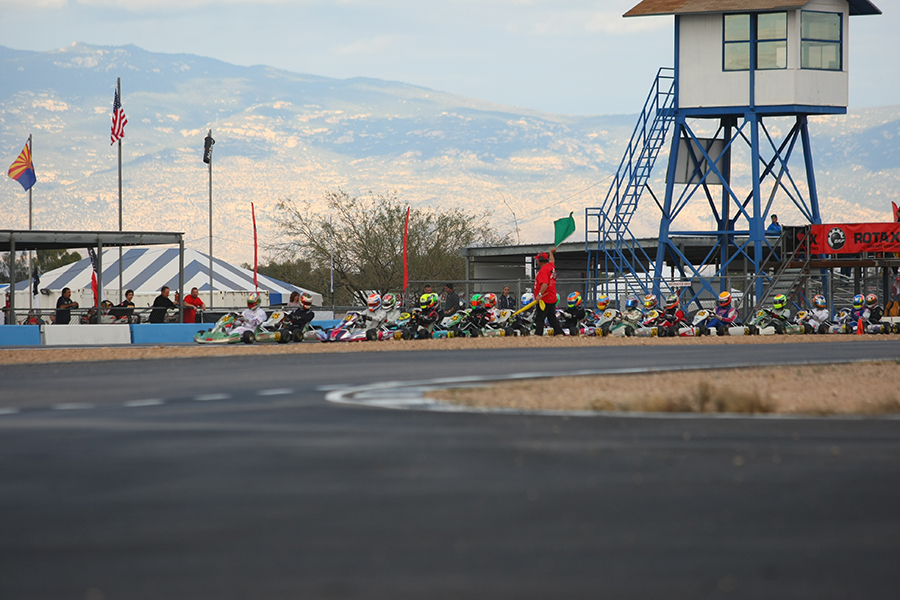 For the 10th season, Challenge of the Americas kicks off the racing season on the west coast, set to host the opening rounds of the 2017 championship series. Racers and teams from all over the western half of North America are converging on the Musselman Honda Circuit in Tucson, Arizona for the first two rounds of the six-race championship chase. Five Rotax categories along with two shifterkart divisions will be joined by a Briggs & Stratton 206 race group to make up the class roster for 2017, bringing together local, regional and international racers together under one banner.

There is no other course like the Musselman Honda Circuit in North America, but there is in the world. The 3/4-mile, 12 turn course is a replica of the Suzuka circuit in Japan. The layout provides some of the best racing we have seen at the Challenge since visiting the Tucson facility in 2012. The course provides speed and technical aspects, as the flowing course emphasizes smooth driving and the correct set-ups.

eKartingNews.com is making its sixth straight year covering Challenge of the Americas with the ‘Trackside Live’ program. Race fans and family members can enjoy the live timing provided by Race Monitor, while listening to the voice of the Challenge – Rob Howden – give the play-by-play call of the on-track action. The EKN Live program can be streamed to your laptop or computer, and on mobile devices all from one page – ekartingnews.com/live. Daily reports, forum and social media updates can be access through the EKN Event Page.

Challenge of the Americas, for the tenth straight year, will award tickets to the Rotax Grand Finals, scheduled in 2017 for the Kartodromo Internacional do Algarve in Portimao, Portugal on November 4-11. Champions from the three headline categories – Senior Rotax, Masters Rotax and Junior Rotax – will represent their country and the Challenge at the ‘Olympics of Karting’. 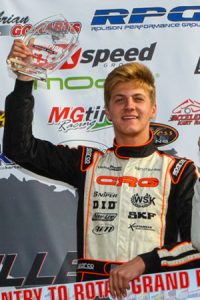 Only two drivers have repeated as champion in the Nash Motorsportz Senior Max division – Wes Phillips (2008-2009) and Phillip Arscott (2013-2014). Last year’s champion Christian Brooks is looking to become the third. The 2016 champion and Red Bull Global Rallycross driver is back to defend his crown. The long-time Nash Motorsportz pilot won last year aboard a CRG chassis, but he moved over to the Tony Kart at the end of the year. As another highlight, last season was a breakout performance for Canadian Kellen Ritter. The Rolison Performance Group / Kosmic driver nearly scored his first major victory as a Senior, finishing on the podium four times in the 2016 Challenge to place as vice-champion. With a full year now under his belt, Ritter is in position to fight for his first Challenge title.

Bryce Choquer and Parker McKean are two former winners in the Senior category at the Challenge. Choquer won at the 2015 season finale, and is returning from Canada after sitting out 2016, set to race aboard a Gillard kart. McKean last won at Tucson in 2013, and is back to the Challenge with the Rolison Performance Group operation aboard a Kosmic. The top Senior rookies include Canadian Matthew Taskinen (RPG / Kosmic), who finished third in the Junior standings. Sonoma Junior Rotax winner Carter Herrera (Cambrian / Birel ART) moved up to the Senior ranks at the end of last year, and he is ready to make his Senior debut at the Challenge. Can-Am frontrunner Jacob Gulick (RPG / Kosmic) is also making the jump to begin 2017.

Numbers in the Junior ranks in 2017 are sure to be among the highest in recent years. This year’s crop of young drivers in the Rolison Performance Group Junior Max category are on point to make for an exciting Challenge championship chase as they all fight for the Rotax Grand Finals ticket. Last year’s title winner Nicholas Brueckner earned that seat with a stellar 2016 Challenge. The Texan is not scheduled to defend his crown, which leaves it open for another driver to claim the position. In his absence, Hannah Greenemeier is right there to lead the charge. The vice-champion last year, the now second-year Junior driver has been developed by RPG into a title contender after finishing on the podium four straight races to close out the 2016 Challenge. Canadian drivers have claimed the Junior title three times in the previous nine Challenge seasons, including the inaugural title with Phillip Orcic. The Maple Leaf is flying strong with Ryan MacDermid traveling down from Ontario for his first start at the Challenge. MacDermid caught world-wide attention by claiming the fast time in qualifying at the 2016 Rotax Grand Finals in Italy. The PSL Karting driver is working with Cambrian Go-Kart operation this weekend in Tucson aboard the successful Birel ART chassis. 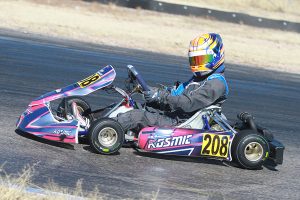 RPG’s Hannah Greenemeier is among the title contenders for Junior Max (Photo: EKN)

A good majority of the field in Tucson will be making their Junior debut. 2014 Challenge Micro Max champion Jak Crawford is among them. The Nash Motorsportz / Tony Kart driver finished the 2016 Challenge with two wins in Mini Max. The 2016 Mini Max champion Austin Torgerson (Tony Kart) is making the move up in 2017. The Oregon driver has been a consistent front-runner in Micro and Mini at the Challenge and across the country, moving up to the full size kart in Junior. Longtime Challenge front-runner Marco Kacic (CRG) is making the jump up to Junior as well as Ethan Ho. The Challenge will welcome Brash Racing drivers Cash and Branyon Tiner for the first time. Cash starting his second year in the Junior ranks while Branyon is making the jump from Micro Max to Junior as an 11-year-old. Lots of experience and talent make up the challengers heading into Tucson.

The Cambrian Go-Karts Rotax Masters category dates back to the first year of the Challenge, and remains the place to race for the ‘elder’ drivers. There is nothing slow or washed-up about the drivers at the Challenge, as year after year the category provides some of the best races and title chases. The absence of last year’s title winner Mike Jones opens up the door for another driver to earn the Rotax Grand Finals ticket. That is the goal of veteran racer Billy Cleavelin (RPG / Kosmic). The Californian turns 60-years-old this summer, and remains among the most aggressive and passionate drivers in the sport. Cleavelin won at the season finale in Sonoma, and is looking to start the 2017 season off in the same fashion, trying for a return to the Rotax Grand Finals after making his first trip in 2016 through the US Open. No one in the history of the Challenge has three series championships. Paul Bonilla is among those with two titles, earning the Masters crown in 2012 and 2015. Back with Full Throttle Karting, Bonilla is on the familiar Birel ART colors to contend for the Masters title. A new driver into the mix, very familiar around the paddock is BBR’s own Blake Choquer. The longtime driver coach/mechanic is putting on the helmet in Tucson to compete for the first time in the Masters division aboard a Gillard chassis. Series regulars Roman Alekseekov (Tony Kart), David Pergande (FTK / Tony Kart) John Breidinger (VRP / Exprit), Ed Quinn (FTK / Birel ART) and Chad Wallace (BBR / Birel ART) will be among those fighting for podium positions. 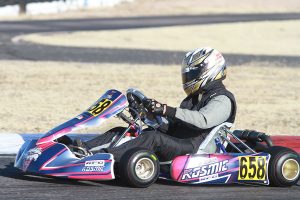 New for the 2017 season is the Briggs & Stratton 206 race group, featuring a Senior (presented by M2 Image Solution) and Junior category (presented by APM Racing). The grassroots engine is the perfect opportunity for local and regional races to experience the atmosphere at the Challenge, and those who just enjoy the ‘out of the box’ and the tight packs of Briggs racing. Notable names including double duty drivers Griffin Dowler, 2016 Masters Max US champion Derek Wang, and Jason Campbell. One driver from outside North America is scheduled to compete, as Nick De Bruijn from the Netherlands will compete. Nick is the son of Peter de Bruijn – a European and World Championship karter and developer of the Gillard chassis.

Numbers are not high in the Brash Racing Mini Max or Podium Karting Micro Max heading into Tucson, but the level of talent has maintained. 2015 Challenge Micro Max champion and 2016 Rotax Grand Finals Micro Max inaugural title winner Diego LaRoque is set for a return to the Challenge. The Arizona driver finished on the podium in both Mini Max and Micro Max last year, set to make a run at the Mini Max title to become the first to win a championship in both categories. LaRoque is staying with the BBR operation, moving over to the Gillard chassis for 2017. 2016 Micro Max champion Ashton Torgerson (Tony Kart) ran double duty last year, placing fifth in the Mini Max title chase. Dustin Salaverria (Benik) fought for podium positions last year, expected to to the same in 2017. Josh Pierson (Tony Kart) is back to the Challenge, doing the double with Mini Max and Briggs 206 racing in Tucson. The Micro field is a mix of returning drivers and new names to the Challenge. Gabby Brienza (Energy) and Sebastian Mulder (Benik) are among those returning. The shifterkart division makes its second season at the Challenge, however, both inaugural champions – Jake French and Ryan Kinnear – are not returning to defend their crowns. Those fighting for the BBR Shifter Senior and Wallace Steel Shifter Masters titles will be decided with the first two rounds in Tucson.