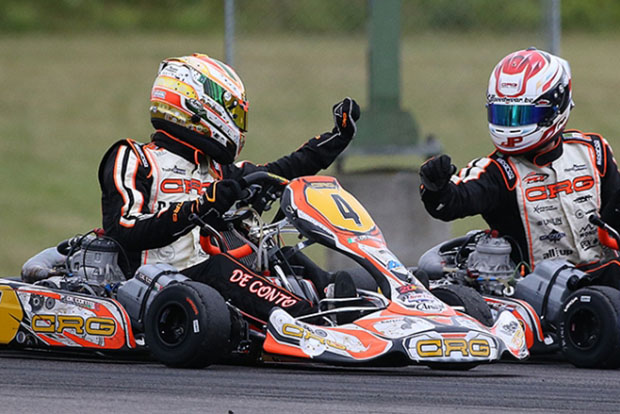 CRG works team for season 2017 is ready to get on track. Some important confirmations and a lot of young promising drivers.

CRG introduces its drivers lineup for 2017, which includes some confirmations as well as new entries, with a special eye to young drivers and new talents to make shine on the international karting scene.

Following the spectacular 2016 season that earned CRG the KZ and OK titles at the CIK FIA World Championship, the victory of the International Super Cup KZ2, those at the European KZ2 and OK Championships, and that saw the Italian outfit dominating DKM in all categories, CRG is now ready to contest a very high level season alongside its technical partners TM Racing and Iame.

The new World Champion Paolo De Conto, Simo Puhakka and Flavio Camponeschi have been confirmed among the CRG lot of KZ. These three drivers are motivated to get once again on top of the most prestigious category where CRG has been shining and built a stunning prize list over the years. After getting close to the title in 2015 and winning it in 2016, Paolo De Conto is all set to run another strong season, as are Simo Puhakka and Flavio Camponeschi that will be aiming to the big target in the most prestigious shifter category.

The works team will also comprise the two Pex brothers Jorrit (2015 KZ World Champion and 2016 DKM World Champion) and the more and more competitive Stan, who will be fielded by CRG Holland.

AN ATTACK SQUAD IN KZ2

CRG colors will be defended by the recent winner of the Champions Cup in Vendrell Mirko Torsellini and by Enrico Prosperi, both at their official comeback to the Italian outfit in KZ2. Alongside them, Alessandro Giardelli comes from Junior to make his debut in the shifter category as will do Taymour Kermanshahchi who comes from OK.

WHAT A TEAM IN OK!

Category OK will see some strong drivers making their debut with CRG. Last year’s winner of Junior DKM and protagonist of the international season Dennis Hauger will contest season 2017 alongside some other interesting youngsters coming from CRG’s breeding ground like Kilian Meyer and Matteo Nannini. Janker Hannes, who was fifth last year at the World Championship in Bahrain, has been confirmed in OK, while another protagonist in Bahrain Davide Lombardo will debut with CRG, as William Alatalo who comes from Junior. The recent CIK-FIA Academy Trophy Champion Callum Bradshaw who has been one of the main protagonists of the international Junior last year and of X30, category in which he has won the MSA  Kartmasters British Grand Prix, has also joined CRG’s team.

A lot of promising talents will debut in OK Junior aiming for a direct confrontation with the best drivers of one of the most lively and tight categories on the karting scene in 2017. CRG will field the young French champion Gillian Henrion and the young Spanish champion Ayrton Fontecha, Gabriel Bortoleto and Donar Nils Munding, alongside the two promising drivers coming from CRG Gamoto, the Spanish driver José Antonio Gomez and the French Evann Mallet. Nik Zamir Zakwan will also be at the start of the new season.

CRG’s squad for 2017 announces to be full of very strong drivers with pretty good chances to shine, as will have the strongest drivers of CRG private teams, like the two times KZ2 European Champion Fabian Federer. Some other drivers might join the team during the season, including some internationally recognized surprise.