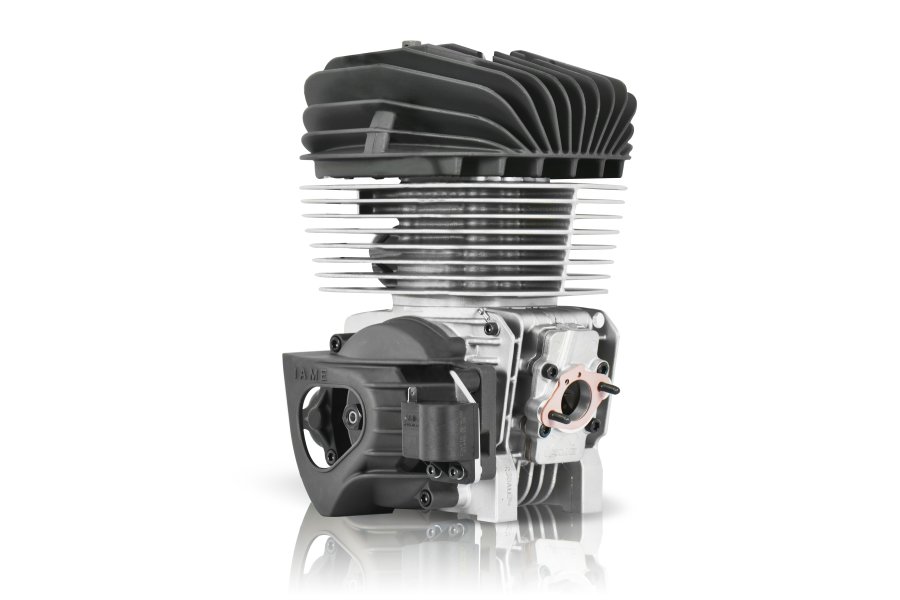 The saying goes like this…‘speed costs money’. The more money you spend, the faster you can go. Karting is no different, as a wide range of speeds and costs are available when you want to hit the race track. The sport provides an incredible option for people searching to fill that need for the adrenaline rush you can only find when you drop down the visor and hit the gas pedal. When karting first began in 1956, racers built their karts from the ground up, machining and welding together their frames while utilizing chainsaw engines and other small powerplants to push their four-wheel machines around local parking lots and parks. Fast forward 60 years and there numerous chassis manufacturers and engine producers around the world, all dedicated to the sport of karting. 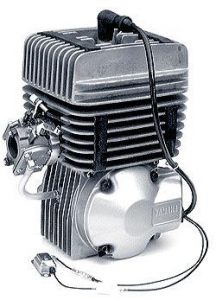 The introduction of the Yamaha engine began a craze that motivated many different manufacturers to create a 100cc piston port engine of their own. Among them was the joint effort between Italian American Motori Engineering (IAME) head engineer Renato Azzolini and IAME USA importer Lynn Haddock. Their creation was the Komet K71 powerplant, introduced in the mid-1980s, which found success quickly in the United States and was adopted in Europe by the CIK for its international junior racing class.

The engine took on its new look in 1996 when California’s Horstman Manufacturing Company utilized the K71 as part of their ‘spec racing kit’ – the Horstman Piston Valve (HPV) engine – which featured a Horstman-manufactured low engagement centrifugal dry clutch and a spec exhaust produced by RLV. It was one of the first spec packages introduced in the karting market. The HPV engine was successful coast-to-coast as both the IKF and WKA adopted the engine, utilizing it in all of their class age groups. Eventually, the TaG craze took dominance over the US market, and eventually IAME and Horstman ended their relationship in the late 2000s before Haddock Limited retained the rights to the now KPV-branded engine. WKA has dropped the HPV/KPV engine platform from its national class roster, although the IKF still recognizes the engine at its events. Clubs and tracks across the country still provide a place for the 100cc Piston Port powerplant to come and play.

Prior to the 2015 season, the IAME KA100 ReedJet engine was introduced for the Australian karting market with the support of the country’s sanctioning body, Karting Australia. The Yamaha engine was utilized in Australia, dating back to 1986, and remains an eligible powerplant at the club level alongside the KA100. Direct drive was the popular choice for the Yamaha divisions, something that went away here in the United States well over a decade ago.

Two reasons played into the development of the IAME KA100 – parity and cost. On-track performance was a major issue, as engines that were nearly 30-years-old were selling for up to 10 times the retail value of a new engine. Many of these ‘special’ engines would only run at major events and were shared between families and teams. This type of parity fueled a rise in the cost of Yamaha racing. Racers would invest thousands of dollars to find and develop a fast Yamaha engine.

“We decided that we needed an out-of-the-box solution that provided good parity and at a reasonable cost that was not increased by the need to blueprint the engine and re-engineer it to get the performance out of it,” added Kelvin O’Reilly, Chief Executive Officer for Karting Australia. “The decision to replace the Yamaha was not one that was taken lightly. The research was conducted for several years by both the former and the current administrations of the sport in Australia to ensure the correct plan was put in place for the long-term future of the sport.” 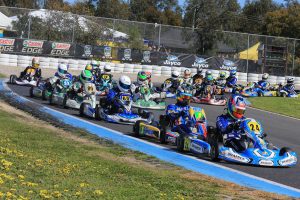 Everyone in the United States is familiar with the success of multi-time Australian David Sera, who has won stateside as well. We asked his viewpoint on the introduction of the KA100 to Australian karting; “The engine parity stands out for me. No longer are newcomers in the sport having to search for these proven engines, they’re now able to concentrate on driving, knowing the engines are all very similar.”

Looking at the KA100 engine, there are five things that stand out when comparing it to the Yamaha KT-100 – solid exhaust, clutch, inlet, starter, and overall power. The KA100 kit comes with a full length solid exhaust, similar to that of the Mini Swift engine. This eliminates the loud can muffler that the Yamaha utilizes. The clutch on the KA100 is the same on the IAME X30 engine. There are no adjustments needed for this clutch, which is the complete opposite of the Yamaha clutch. Either wet or dry, friction disks and springs make clutch maintenance a must in order to ensure your Yamaha engine is performing at its best.

Of course, the inlet system is completely different for the KA100 to the Yamaha. The KA100 is a reed valve engine, similar to its larger IAME TaG engines, while the Yamaha is a piston port engine. The carburetor is a Tillotson HW 33A – designed just for the KA100 engine – moving away from the Walboro WB-3A on a Yamaha. Another different component is the standard IAME airbox, something that comes with the KA100 kit, while with the Yamaha, is an added expense.

The biggest difference, and what could be the greatest selling point, is the onboard starter. The Yamaha has always utilized the external starter, making it impossible for the average racer to just jump in and go like the TaG karts. The KA100 comes with the electronic onboard starter – similar to that of the IAME TaG engines.

Below are some specifications related to each engine:

Taking all the different factors between the two engines, let’s look at the bottom line – cost – using the CometKartSales.com online store as our guide for the different costs. The KA100 is available now for $1695 (promo price). IAME has stated the retail price will be $2,295. The engine kit includes the carb, clutch, exhaust, and airbox. A Yamaha engine at retail is $750 and includes the carburator. Add in a clutch ($315), exhaust muffler ($79) and an airbox ($30), and the difference shrinks down to about $520.

For 2017, the United States Pro Kart Series has elected to introduce the KA100 engine as a replacement to the Yamaha in the Senior Pro class. Last year’s numbers in the Yamaha Pro went from 17 at the opener to five at the finale. The racing can be incredibly tight, but weekend after weekend it continued to be the same three or four in the hunt for the victory. Now, the KA100 is set to be the headline 100cc category for the series entering its fifth season.

“From the very beginning, the USPKS has set out to be an industry leader, and a pioneer in the sport,” stated USPKS owner Mark Coats. “The KA100 is a major step forward in 100cc racing, but it’s a new package to the American karter.”

The new engine has brought veteran racer TJ Koyen out of retirement, albeit a six-week one at that, who is one of the first drivers to commit to the KA100 class at the USPKS championship. “I think the engine addresses some of the shortcomings of the Yamaha package that racers have been complaining about. It’s faster, hopefully more reliable, and offers a nice in-between for drivers not ready to commit to the cost and complexity of full-on 125cc TaG racing. It reminds me of KPV, which was my favorite class to race in. And with the harder MG Red tire that the USPKS is running on, I think the whole formula for the class is spot-on and should provide a ton of fun.”

Koyen’s point about the ‘in-between for drivers not ready for TaG’ is exactly why I think this engine will be great at all levels of the sport – club, regional and club. Right now, we have a great engine package ladder system based on speed, maintenance, and cost – Briggs LO206, Yamaha/KA100, TaG, and Shifter.

We are seeing a number of new racers at the adult age group entering the sport for the first time, or returning, thanks to the simplicity and ‘out of the box’ parity of the Briggs 206. Eventually, racers look for the next step up, and speed-wise, that would be the Yamaha engine. Many feel the Yamaha platform is based around the engine builder, and not the driver/kart combination we see in 206 racing. We are seeing it more now in the TaG world, even with Rotax looking for engine parity moving into the 2017 season.

Many feel that the KA100 is just the next fad that will eventually go away, as the Yamaha remains the lead 2-cycle engine for grassroots karting. The Yamaha is still standing strong compared to its other piston port 100cc engines. There are still thousands of them around the country, with parts still readily available, and new powerplants still being manufactured. Time will tell, and we’ll be watching closely, as the KA100 makes its United States debut in April at the GoPro Motorplex.

10 thoughts on “IAME KA100: The Future for Grassroots 2-Cycle Karting?”