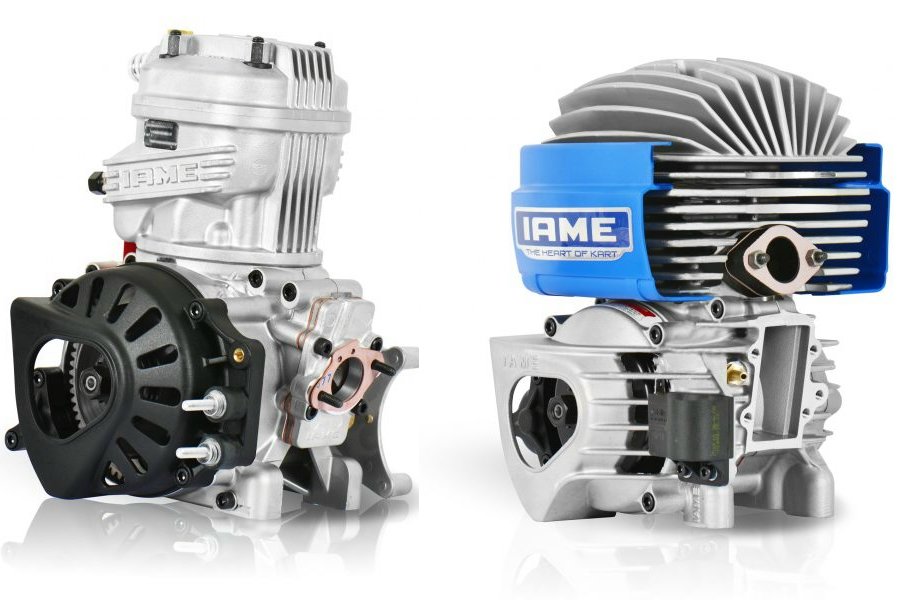 Now that we’re halfway through January, it’s really starting to feel like the new season is up and running.  The final weeks of 2016 felt like a whirlwind, as we came off a month of preparations that led into our trackside effort for last November’s SKUSA SuperNationals.  It seems like I just left Las Vegas, blinked my eyes, and now Christmas and New Year’s are also in the rear view mirror.  While SuperNats 20 is now almost two months in the past, there are still hot topics that boiled over at the event and I’ll likely use a few as fuel for future editions of my Morning Coffee segment.  Today’s rant has to do with the engine claim rule, and its value in our sport, especially as we head into a new year with a clean slate.

SuperSunday is the biggest day in North American karting, and with the pressure on, we all expect emotions to run hot, and the stress is often palpable.  The competition is heated, the final laps are normally contact- and aggression-filled, and even the post-race atmosphere is tense.  The claiming of an engine post-race presents the dichotomy of motorsports emotion, as a crucial component of a successful race package is plucked from one program and added to someone else’s.  While it’s an aggressive solution, I do believe that the claim rule is a necessary part of any viable long-term spec engine program.

In the days that followed the SuperNationals, the EKN forums lit up after a new member made a post in the ‘General Discussion’ section, slamming a Mini Swift parent for claiming a motor post-race.  The registration of the account slipped past our guard, as we normally require forum members to use their real names. This account was registered under the nickname ‘racingmom’ and this is what was posted:

If you can’t beat em, buy em! Racing mom has learned that Diego Laroque’s dad has just CLAIMED Reece Gold’s motor at the Supernats. Everyone knows although SKUSA is a claiming race, it’s an unwritten rule that this JUST ISN’T DONE. If your child can’t win with his equipment, buying someone else’s isn’t going to help! No problem with Diego here, I’m sure he doesn’t even know his daddy is trying to buy him a podium. By the way, I’m not Reece’s mom, just a racing mom trying to keep it real. SHAME ON YOU MR. LAROQUE! 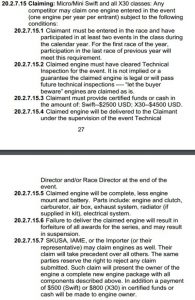 When I initially read this post, it was so ridiculous, I could only laugh.  The line that reads “Everyone knows although SKUSA is a claiming race, it’s an unwritten rule that this JUST ISN’T DONE” is part of what’s wrong with our sport.  This is obviously not the case, and in truth, engines NEED to be claimed to keep the class honest and clean.   In fact, in the SKUSA rulebook, the organization reserves the right to claim any motor on the grid themselves and replace it with a new engine.  Spec engine programs are the current motor platforms in karting, where its IAME, Honda, Rok or Rotax, and it needs to be understood that component manufacturing does have certain levels of variances and tolerances.  The current technology guarantees that the engines will all be very close, so anything over a minor discrepancy can provide an advantage. SKUSA’s ability to have the power to pull abnormally high performing engines from the motor pool will help ensure a level playing field for everyone.

The real key to the claim rule is to defend against bottomless budgets and parents who do not realize that buying wins does nothing for their child’s development. And, folks, claiming an engine isn’t ‘buying wins’, it’s a step towards eliminating a perceived advantage. Colton Herta had more than one engine claimed during the first two years of the Pro Tour, and the loss of any one powerplant did nothing to change his position on the grid.

That said, ‘special engines’ have been in this sport long before the current issues.  When I first entered karting in the early 90s, and became a journalist, there were a couple of monster KT100s that would go around, selling for prices ranging from $5,000-$10,000. These engines were passed between well-off families and always ran at the front of the pack.  The nature of the Yamaha and the blueprinting that needed to be done to level of the performance from wide casting tolerances opened the door for miraculously-matched components and, as was the case, those ‘magic’ motors were super strong and made their rounds.  We’ve all heard the stories of monster Rotax Mini Max motors going for $25k-plus. Claim rules were brought into place by SKUSA to ensure that there were opportunities to eliminate these ‘freakish’ motors from dominating the action and being sold to the highest bidder.  While the primary option for the rule – an engine being claimed by another competitor – keeps the engine in circulation, I have no doubt that its flagged through its new owner and serial numbers and has its performance charted. SKUSA has yet to pull the trigger on claiming a motor itself, but the option is always there, and that is the key.

SKUSA’s pure IAME engine program will enter its third season of competition in 2017 and the overall stability and confidence in the motor is high.  In spec engine racing, the idea is to level the playing field so that driver talent, racecraft and set-up ability determine success, not horsepower and torque numbers.  The engine claim rule policies the purity of the engine platform by setting a value on any one motor, which is laid out in the rulebook.  The statement by ‘racingmom’ in the EKN forums was ridiculous, not only in its focus and ‘shaming’ effort on one racing family, but its basic ignorance of the rule and the intent.  Thankfully, several Mini Swift parents commented on a separate thread (after we halted the discussion on the initial post), providing their support for the family who claimed the engine at the SuperNationals, and their support for the rule and its positive effect on the program.

The engine claim protects a program from two major issues: manufacturing variances and unlimited budgets. And in the world of motorsports, controlling these factors increases customer confidence.

One thought on “Morning Coffee: The Engine Claim Rule”