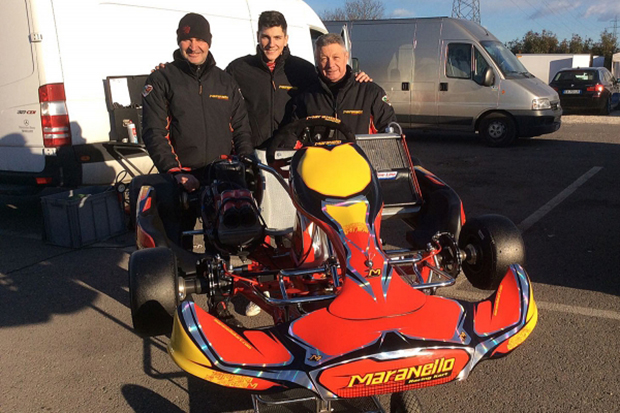 Season 2017 is about to start with an important sporting programme for Maranello Kart’s Racing Team directed by Stefano Griggio with the collaboration of Tiziano Rizzi and the Support of TM Racing. The French driver Nicolas Gonzales new entry in the team.

Maranello Kart is ready to run another season as protagonist in 2017, fielding a strong squad in the Racing Team, that is led by Team Manager Stefano Griggio, with the collaboration of Tiziano Rizzi regarding engines and the support of TM Racing.

NICOLAS GONZALES. Maranello Kart will field the new-entry Nicolas Gonzales in 2017, the quick French driver will in fact be competing for the Italian outfit in KZ2. He has a great past that includes a world victory in X30 Senior in 2013, and the fourth place with pole position in the CIK-FIA International Super Cup KZ2 held in Le Mans in 2015. Gonzales will kick off his season in Mexico next 29 January in Guadalajara with the support of importer Bortoni Motorsport, before taking part to an intense programme featuring the Andrea Margutti Trophy and Spring Trophy in Lonato, the European Championship and the International Super Cup KZ2, and some races of the German and Italian Championships.

TOMMASO MOSCA. Maranello Kart confirmed Tommaso Mosca, a great protagonist at the International Super Cup KZ in Kristianstad in 2016. Mosca will start his racing season at the Winter Cup of KZ2 in Lonato, but will also make his debut in motor racing. Season 2017 announces therefore to be quite busy and demanding for the young driver from Brescia.

ALBERTO CAVALIERI. Among the main protagonists of Maranello Kart’s season, Alberto Cavalieri has been confirmed in the racing team led by Stefano Griggio. He will compete in the Winter Cup and in the most important other races held in Lonato, before taking part to the main event of the season: the International Super Cup KZ2 in Wackersdorf. Alongside his driving duties, Alberto Cavalieri has also take on the important role of technical support officer for Italian and foreign customers of Maranello Kart. Moreover, Cavalieri will also manage the project of a karting school starting from Minikart, a category that is being looked at with interest for the future by Maranello Kart’s racing department.

MASSIMO DANTE. Maranello Kart has also confirmed Massimo Dante, who has been a strong interpreter of KZ2 and of the track of Lonato, venue where he will be present in 2017 to chase some further glory in the trophies up for grabs at the South Garda Karting circuit.

FLAVIO SANI. Following the good past racing season, the driver from Tuscany Flavio Sani is aiming to a strong 2017 season with Maranello Kart in KZ2. He will kick off his racing season at the Andrea Margutti Trophy, before taking part to the Italian Championship and to the International Super Cup in Wackersdorf.

MARCO ZANCHETTA. Another top driver of Maranello Kart for 2017, Marco Zanchetta programmed a series of intensive tests in some support races, to prepare at best ahead of the international CIK-FIA season of the European Championship and International Super Cup KZ2.

PROTAGONISTS ON OTHER IMPORTANT STAGES

Maranello Kart’s colors will also be present in high-rank races and in the Italian Championship with other strong drivers in 2017. Marco Pastacaldi will compete in KZ2, Luca Bombardelli, Roberto Cesari, Alessio Zanotti and the promising Sicilian Francesco Alaimo in KZ3.

Maranello Kart will therefore live another demanding season on several fronts, as the Italian chassis are ready to confirm all the competitiveness displayed in 2016 and to be one of the main protagonists of the International and National karting scene.