Behind the Laptop: State of the Sport – National Programs 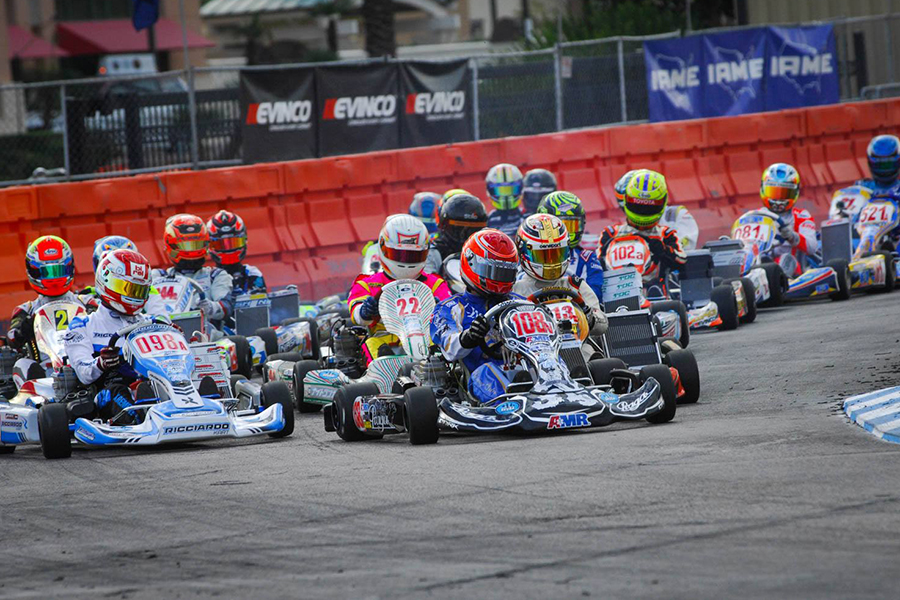 The 2017 season is happening now. In year’s past, it took some time for the racing year to get busy. In today’s world, karting is happening every weekend – 52 weeks a year. No matter where you turn, there is a kart race at the local, regional or national level. Looking ahead to the new year, there are five major programs that make up the national scene in North America. Each have similarities and differences, but the fact remains they are all gunning for the same piece of the karting market. To set the stage for 2017, here are roughly three things that stand out for each series. 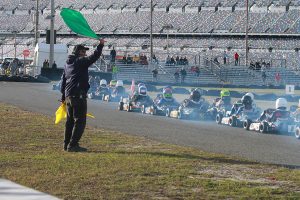 The green flag has waved to begin the 2017 WKA season with the annual trip to Daytona (Photo: EKN)

The first program to start off the 2017, and every season for that matter, is the World Karting Association Manufacturers Cup Series. The program is coming off impressive growth in numbers from 2015, and is now on a solid foundation in terms of classes that are being offered. The Man Cup class structure has helped with the growth, as there has typically been changes from year to year. The transition from 2016 to 2017 includes the drop of the Kid Kart class, and the addition of the Briggs & Stratton 206 engine with a Senior class, utilizing the Man Cup chassis rules. The class debut at Daytona attracted 32 drivers to the event, and will be monitored by the numbers and competition level throughout the season.

New-for-2017 is the Manufacturers Cup Series event structure, as the overall weekend schedule has been revised. Day 1 of competition will stay with the two heat races / main event approach, while Day 2 will run with the single heat / main event format similar to what was done at Daytona for both days. This has been implemented to allow competitors to leave the event a bit earlier on Sunday and to provide a unique challenge at the same time. Personally, the Daytona format of qualifying / Prefinal / Final went off so well, I’d love to see that format be adopted for the entire season. While the numbers may be improving, I still feel that the WKA – as an organization – needs to focus more of its attention at the grassroots level. There still seems to be a disconnect between the organization and the local/club level tracks across the country. Certainly, for numbers to continue to grow, there needs to be more and more racers at the lower levels to help feed the regional and national programs, such as the Manufacturers Cup Series.

Our next stop on the EKN Live 2017 Tour is the Challenge of the Americas. Andy Seesemann and his staff are ready to host the 10th season of the Challenge, which is considered by many to be the best-structured and most exciting series to be a part of. From the first time that EKN visited the program in 2012, it has stood out as a relaxed, competitive, fair and amazing series to run. While many of the high-profile international stars may elect for the Florida Winter Tour, COTA travels to three challenging courses, welcomes some of the top drivers in North America, and awards tickets to the Rotax Grand Finals and other solid prizes for series champions. 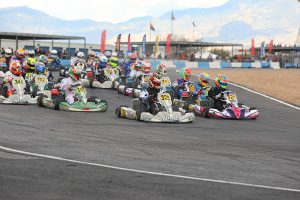 Challenge of the Americas is set to open up its 10th season this month in Tucson (Photo: SeanBuur.com)

Some of the issues that the Challenge has faced are not of their own doing, but are instead connected to the state of the Rotax product. Many racers have become frustrated with the continual change to rules and the products that are required to be competitive in Rotax competition. The positive changes for 2017 include the return of the 950mm chassis in Mini Max competition, the move to the new MaxOne by Vega tires for Senior and Masters, and the new Junior cylinders for the younger categories. The addition of shifterkarts to the Challenge last year brought in a solid group of racers to experience the atmosphere of COTA. Now, the Challenge is adding the Briggs & Stratton 206 engine package to be part of their 2017 events. It will not be a championship class, but instead, the category will race for weekend prizes and provide regional/local racers the chance to compete on the big stage.

This weekend is the start of the Florida Winter Tour. It marks the third season that MAXSpeed Entertainment has promoted the program after purchasing the series from Bill Wright. Like COTA, the new tire for Rotax is the biggest change in the program. The MaxOne tires received rave reviews according to those who attended the Winter Collective Test in December at Homestead. The tires will also be a part of the United States Rotax Grand Nationals, the US Open of New Jersey and the US Open of Las Vegas. Along with the tires, the new Rotax Junior cylinders have been promoted as a positive, and they will be utilized in Junior Max, Mini Max and Micro Max, which made their debut at the 2016 Rotax Grand Finals. Next weekend, when the Rotax categories start their events of the 2017 FWT program, it will be the official debut for both the tires and the cylinders here in the United States.

The Florida Winter Tour continues to promote a double-weekend format, partnering up once again with Rok Cup USA. This year, the three events that make up the FWT schedule will be included as part of the Rok Cup Florida program. There seems to be continued momentum for the Rok program for the state of Florida, with little cells of support for the engine program across the country. The FWT certainly allows for some of the bigger names to venture down to the Sunshine State, with some talented pilots contesting both weekends. Part of this trend has to do with the larger race teams and chassis manufacturers that venture down to Florida for the opening three months of the year. In the past, the series used to be a vacation destination for racers during the off-season. Now, it’s a full week of practice and racing per round, running during back-to-back weeks, with many of the teams spending 14 days or more in hotels each month. It has hugely escalated the cost for those wishing to race under those tents. The great thing about karting is that you don’t need to be at the track for a week straight. Just show up with the kart in the back of the pickup, and take it to the competition. We’ll be watching to see if anyone stands out like that at the FWT this year.

Superkarts! USA will be adding to the winter schedule for the first time this season. The SKUSA Pro Tour has added the WinterNationals for 2017, set to take place at NOLA Motorsports Park in New Orleans at the beginning of March. The event falls in before the FWT finale weekends and the weekend after the WKA Winter Cup event in Jacksonville. The Texas ProKart Challenge is hosting a regional event at NOLA the weekend prior as a their 2017 opener and a WinterNationals warm-up, which is sure to see a number of SKUSA Pro Tour championship hopefuls taking part. While the WinterNationals adds to the already busy schedule of the winter months, it opens up the SuperNationals to become a stand-alone event once again. No longer will the Pro Tour champions be crowned following the action on SuperSunday, but will instead be decided after the SummerNationals in New Castle, in a best five of six title chase. 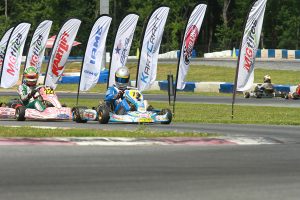 The same categories from 2016 are back in action for 2017, as SKUSA continues to flourish with its partnerships with IAME and Honda. Both engine packages continue to gain momentum, and the SKUSA Stock Honda ladder system continues to develop the current and future stars in shifterkart racing. It will be great to see a new crop of S1 drivers graduate from S2 and to see who emerges as contenders in the Semi-Pro division. One of the new aspects of SKUSA’s 2017 program will be the man in charge of overseeing the on-track action. Long-time SKUSA Race Director Terry Bybee has stepped down, leaving a void for the California ProKart Challenge and the Pro Tour. SKUSA has yet to announce a replacement, and many in the paddock are eager to see who will be calling the shots on-track in 2017.  SKUSA also released news post-SuperNats that it would be looking seriously at video marshaling, so this will be another announcement that will be of great interest to the drivers planning to compete in what has been the largest sprint racing series in the US over the last three years.

The United States Pro Kart Series is set to wave the green on its fifth season since Mark Coats created the program with the support of kart shops and teams in 2013. At that time, there was a disconnect between the WKA and its race teams/competitors. The USPKS offered up something new and exciting, and provided a solid schedule, class structure and experience. That same format remains as another four-event schedule has been set for 2017. Returning to GoPro Motorplex, Pittsburgh and New Castle, the USPKS will complete the schedule by adding an event at the Autobahn Country Club. It is expected to be a temporary circuit, something new for the series, serving as the championship finale.

The addition of the ‘Drop Down Bumper’ and the IAME KA100 engine are also new for the USPKS in 2017. The new nose cone mounting system – utilized by the CIK-FIA – pushes in when hard contact is made, and officials then have the ability to penalize the driver. This is being brought in – for the first time in the United States – to help reduce incidents from over-aggressive driving. With the first event scheduled for April, we will have to wait and see how the new system works out, and if any other organizations follow suit by adding the hardware to their karts. The new KA100 engine will replace the Yamaha KT100 in the Yamaha Pro division. With the numbers dwindling in the top class, USPKS elected to make a move to the new powerplant with a great incentive program for competitors to purchase the engine. USPKS is the first organization in the United States to add the engine package at the national level. EKN will have more on the engine package in another column later this winter.

EKN is currently working on conducting interviews with many of the national level promoters and key figures from the sanctioning bodies. The first to publish was the interview with World Karting Association’s Buddy Long. The next on the docket is a Q&A with Challenge of the Americas promoter Andy Seesemann. Others are on the horizon as we hit the month of February, with the winter programs well underway.