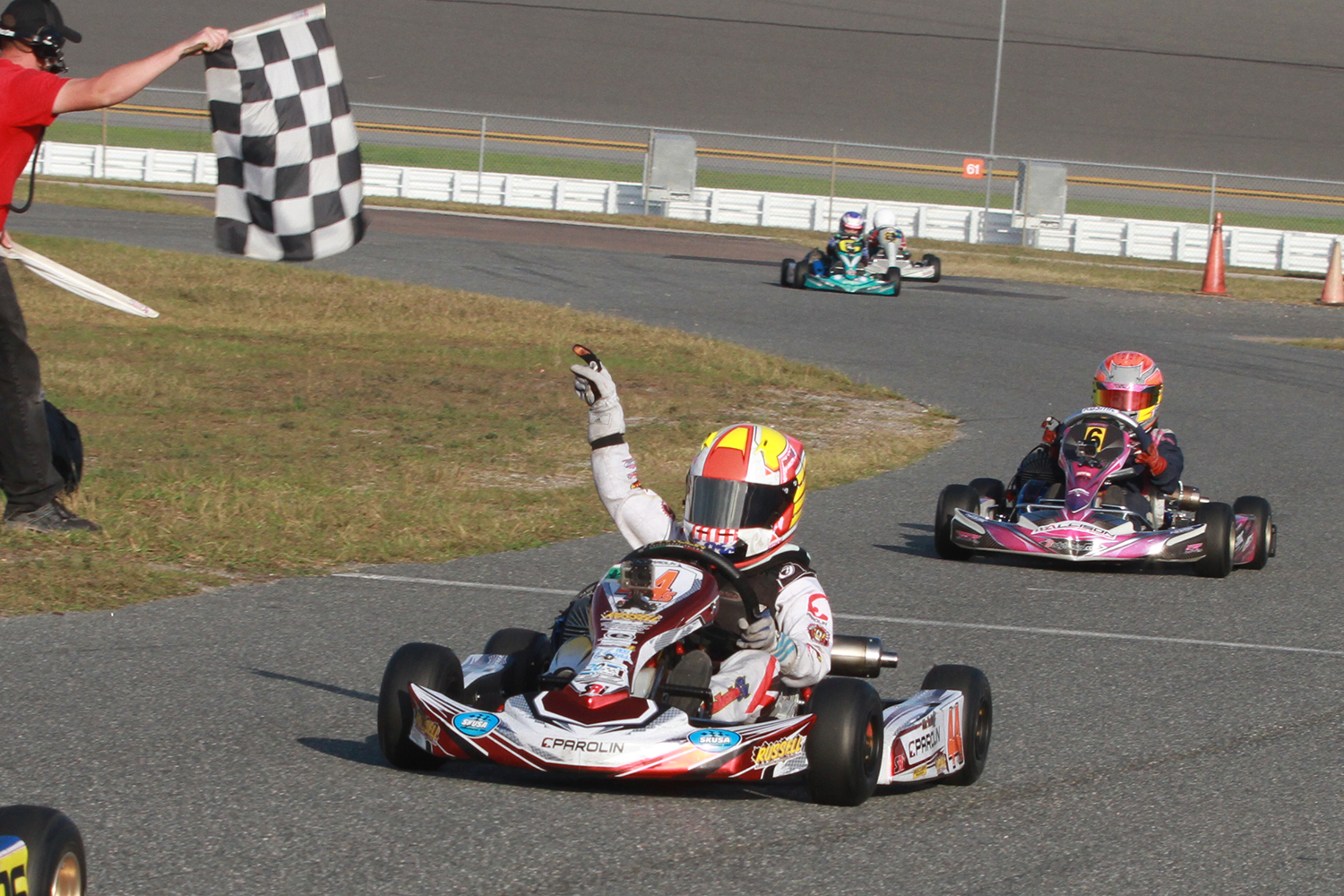 Caleb drove to his first ever victory at the Daytona International Speedway during the WKA Daytona KartWeek event (Photo: eKartingNews.com)

Two years ago, Caleb Gafrarar made his first start inside the Daytona International Raceway. The then 6-year-old made his World Karting Association Manufacturers Cup Series Kid Kart debut during the annual Daytona KartWeek held on the Daytona Kart Track that sits inside turn three of the NASCAR oval. Fast forward to December 2016, ‘Caleb G’ visited the DIS facility for the third time, making his second Mini Swift start to open up the 2017 championship season. The Russell Karting Specialties / Parolin pilot was among the quickest throughout the three days of competition, coming away with a victory in Round One and a sixth-place result in Round Two. 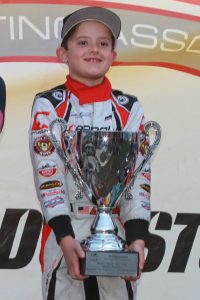 The event kicked off on December 28 as the over 200 entries at the sprint track enjoyed the warm weather for a full day of practice. Six sessions were given to the nine categories, with Caleb G posting the quickest time in the final round of the day (45.633). Gafrarar opened up the first round of action on December 29 with the second fastest lap in qualifying (45.464). Running second for the first half of the Prefinal, Gafrarar took over the lead after the halfway point and drove away to a 1.1-second advantage while posting the fast laps of the race. With 34 drivers taking part in the category and a wide range of experience with the drivers, lap traffic was a major factor in the main event. Gafrarar held a solid gap early on until hitting the slower karts. The top challengers were able to close in, however, Caleb negotiated the lap traffic without any issues. Gafrarar led all 20 laps to score the checkered flag, his first at the Daytona International Speedway.

Cold weather rolled in on December 30 for the second round of competition. Caleb recorded the fourth quickest time in the qualifying session, but was shuffled back to 10th in the opening lap of the Prefinal. The young wheelman held on after the off-track excursion and fought back to finish sixth to line up outside row three for the main event. Gafrarar’s Parolin was quick early, climbing up to the third spot by lap three of the Final and kept pace with the top-two. While lap traffic helped Caleb on Day 1, it hindered his result on Day 2. Lap 18, Gafrarar was attempting to work around a slower kart when it spun around just in front of him. Taking evasive action to avoid contact, Caleb slipped down to sixth, where he would finish. The 8-year-old recorded the fast lap of the race while running down the leaders at the halfway point, and thanks to a solid overall performance over the two day, put himself in the early championship hunt.

Caleb G is set to make the first international start of his four-year career with a trip to Guadalajara, Mexico. The 2017 Grand Prix International Wing’s Army by Sidral AGA is scheduled for January 27-29 at the Esplanade of Chivas Stadium with more than 200 international drivers competing in what is the first of two events to crown the best driver of Mexico. The festival-style event is bringing in some of the best karting drivers from around the world, with Caleb G invited to join Parolin Racing Mexico as one of its Micro IAME competitors.

Following the trip to Mexico, Gafrarar will return to action with the World Karting Association with the second stop of the 2017 Winter Cup. On February 24-26, Caleb G heads back to the 103rd Street Sports Complex in Jacksonville, Florida – where he has found previous success. The weekend after is the inaugural Superkarts! USA Pro Tour WinterNationals at the NOLA Motorsports Park in New Orleans, Louisiana – site of the Rotax Grand Finals in 2013.