Over the last seven seasons, the Superkarts! USA Pro Tour has grown in leaps and bounds, setting record-entry numbers along the way.  The 2016 season maintained this momentum, and not only did participation hit new marks, so did the level of competition. Winning a Pro Tour title has become a truly prestigious accomplishment, and nine extremely talented drivers got the job done in 2016 to join the lucrative ‘SKUSA Circle of Champions’, which provides them with entry package sponsorship for the 2017 Pro Tour.

Interestingly, all nine became first-time SKUSA Pro Tour champions when they turned in title-winning performances at the SuperNationals in November. 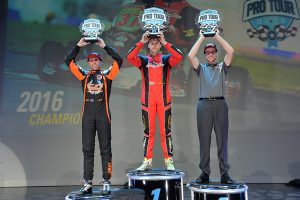 It was a memorable 2016 SKUSA SuperNationals for veteran Danny Formal. The 2015 SuperNats S1 winner was able to come back and defend the victory, clinching his first-ever Superkarts! USA Pro Tour title in the process. The Costa Rican notched up three runner-up finishes on the season heading into Las Vegas, entering with the Pro Tour lead as the odds-on favorite to win the finale. While Formal did not sweep the event as he did in his previous victory, the DRT Racing / DR Kart driver led wire-to-wire on SuperSunday to cash in on the $20,000 bounty. Add in the $3,000 in cash for the Pro Tour title, over $3,500 in the Circle of Champions awards, and the Honda/HPD US F4 Championship Series package, and Formal’s total draw was roughly $44,000 leaving Las Vegas. Texan Jake French placed on the Pro Tour podium twice in 2016, and secured the pole position on SuperSunday. Dropping back at the start, the Dallas Karting Complex driver fought forward aboard his Sodi Kart to finish third, helping to claim the second spot in the Pro Tour standings. Round Two winner and former Pro Tour champion Daniel Bray completed the season to earn the #3 SKUSA plate. The Kiwi – driving a GP for VCI Mexico – placed fourth at the SuperNationals to secure the final step of the championship podium. 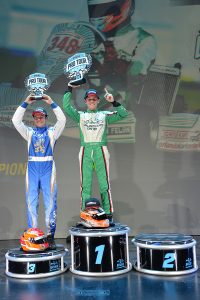 Florida’s Ryan Norberg became the seventh different driver to earn Superkarts! USA’s headline TaG championship. A three-time winner in 2016, Norberg’s eighth place performance in Las Vegas locked up the X30 Senior championship, earning him the SKUSA #1 plate for 2017. Along with the prestige of earning the title, Norberg takes home a $3,000 paycheck and is now part of the 2017 Circle of Champions program, which pushes his winnings to over $6500. The fight for second went down to the wire, with Brandon Jarsocrak edging out Kyle Kirkwood for the SKUSA #2 plate. At the championship awards ceremony, a miscommunication resulted in Kirkwood being awarded the second-place while Jarsocrak was announced in third. The official standings, however, show that Jarsocrak was indeed second, giving the KartSport North America / Praga driver the second place honors with PSL Karting / Birel ART pilot Kirkwood earning the third spot.

It was a close battle all season long in the S2 Semi-Pro Stock Moto championship chase. A number of drivers put themselves in the hunt, with five different winners on the year. Round One winner Austin Wilkins established himself as the point leader following the SummerNationals, racking up two podium results in New Castle. The Dallas Karting Complex / Sodi Kart driver repeated his runner-up performance from a year ago to claim his first ever SKUSA Pro Tour championship – becoming the seventh different title winner. Along with the SKUSA #1 plate, Honda/HPD awarded Wilkins with a brand new CR125 engine. Franklin Motorsports / Merlin pilot Kyle Kalish completed his second season in Stock Moto competition by earning the SKUSA #2 plate. The Illinois native stood on the podium twice, including his first SKUSA Pro Tour victory at Round Three. Round Four winner Hunter Pickett earned his first podium at the SuperNationals to clinch the third step of the championship podium, and the #3 plate, as the Aluminos driver placed fifth in Las Vegas. 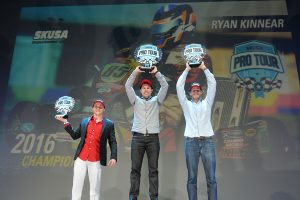 Ryan Kinnear became a first-time SKUSA Pro Tour champion as he finished the year on top in the S4 Master Stock Moto division. The SummerNationals double winner entered Las Vegas as the point leader, and the Champion Racing / Intrepid driver fought for the victory on SuperSunday. Placing third at the end of 20 hard-fought laps, Kinnear secured the SKUSA #1 plate for 2017. Round One winner and 2013 SKUSA Pro Tour champion Jordon Musser finished the season as vice-champion. With four total podium finishes on the year for the 3G Kart Racing / Intrepid driver, Musser completed the year with a fifth place finish at the SuperNationals to earn the SKUSA #2 plate. S4 newcomer Alan Michel finished the year third in the standings. Earning his first S4 victory at Round Two, the VCI / GP driver is primed to be among the top challengers in 2017.

Consistency is key to earning a championship, and that was on display in the X30 Master division. Five different drivers claimed the top spot of the podium in 2016. Derek Wang was the only driver to earn four podium finishes on the season, helping the BBR / FA Kart driver to secure his first SKUSA Pro Tour championship. Wang was third-place three times on the year, including the SuperNationals, to secure the SKUSA #1 plate. Veteran John Crow completed the season as vice-champion while Round Three winner Erik Jackson ended third in the standings. 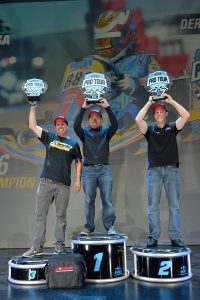 The S4 Super Master Stock Moto class made its debut on the SKUSA Pro Tour in 2016. Two drivers battled for the top spot all season long. Both Robert Marks and Nick Firestone earned two victories through the SpringNationals and SummerNationals, and were separated by just 25 points going into the SuperNationals. Marks was able to finish year off strongly, earning the inaugural S4 Super Master victory at the SuperNationals ahead of Firestone to claim the championship. Firestone settled for the vice-champion award, while Rod Clinard completed the first-ever championship podium for the S4 Super Master division in third.

Three Mini Swift drivers entered the SuperNationals within 14 points of each other in the championship chase. Tyler Maxson’s performance throughout the SuperNationals, capped off by a fifth-place drive on SuperSunday, secured the SKUSA Pro Tour championship for the Benik driver. Round One winner Diego LaRoque finished the year as the vice-champion, while three-time podium finisher Kyle Thome ended up third in the final standings.

The inaugural Micro Swift SKUSA Pro Tour champion is Leading edge Motorsports’ Kai Sorensen. The Northern California pilot used three runner-up finishes and a third-place performance at the SuperNationals to claim the top spot in the championship standings. British driver Brandon Carr won the second round at the SpringNationals, and placed fifth at the SuperNationals to secure the vice-champion position in the standings. Round Four victor Elliot Cox won the tight battle for the third step on the championship podium. 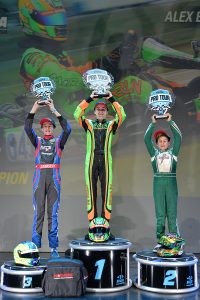 The 2017 season will bring a new format for the Superkarts! USA Pro Tour. Three double-round weekends will make up the championship program, kicking off with the inaugural WinterNationals. Set for March 3-5, the new event is set to make its debut at NOLA Motorsports Park in New Orleans, Louisiana. The SpringNationals returns to the site of the inaugural Pro Tour event – Simraceway Performance Karting Center in Sonoma, California – scheduled for May 5-7. The SummerNationals returns to the New Castle Motorsports Park for the third straight year, moving to the August 11-13 weekend.  The SummerNationals will now act as the season finale. The 21st annual SuperNationals becomes a stand-alone event, similar to what it was from 1997-2009, set for November 15-19 in Las Vegas. The Pro Tour Awards Ceremony will be part of the SuperNationals and the newly-crowned champions will have the honor of running their #1 plates that week.