Annual vacation event at the World Center of Racing 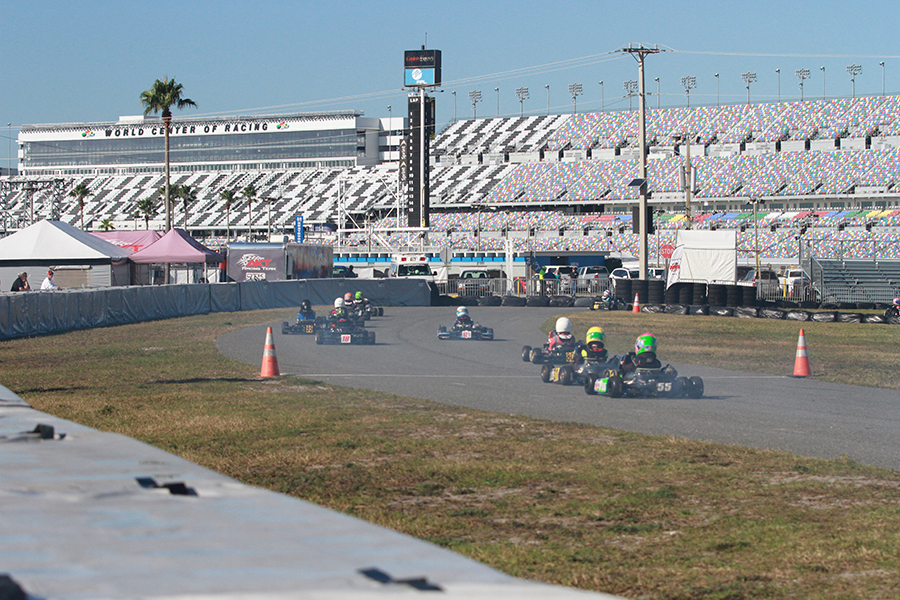 EKN’s Paddock Insider is a new Trackside coverage addition, bringing you notes, updates and breaking news as it happens. The article will be a timeline of events as they happen during the WKA Daytona KartWeek 2016 at the Daytona International Speedway in Daytona Beach, Florida. The information will not be seen anywhere else, including interviews and photos. Please feel free to comment and discuss our coverage and today’s action in the EKN Global Members Discussion area below: For complete coverage head to the EKN Event Page. 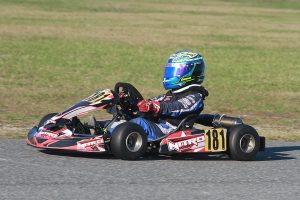 Nitro Kart under a number of Cadet driver for 2017 (Photo: EKN)

Launched at the end of 2016, Nitro Kart is ready to take the 2017 season by storm. A chassis designed strictly for the Cadet level, Nitro Kart is represented by 13 different drivers in the Mini Swift, Pro Swift Sportsman and Yamaha Sportsman. SKUSA Pro Tour champion Nick Tucker is owner/developer of the Nitro Kart, and has a full season scheduled for 2017 with WKA, SKUSA, USPKS and club events at the GoPro Motorplex. The North Carolina-based operation has done a lot of development work with the past 12 months, looking to gain solid results here in Daytona. Helping here in the paddock with driver coaching is Luke Selliken. The SKUSA Pro Tour champion is attending Wake Forrest, and was a perfect match with the Pacific Northwest native Tucker. 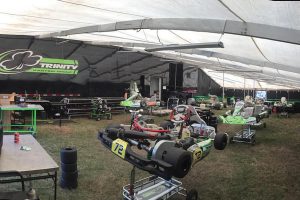 Daytona KartWeek is the national debut for the Trinity Karting Group operation. Based out of the Cincinnati area, Trinity is mounting a full 2017 campaign with WKA, SKUSA and KRA competition. Located in Batavia, the Motorsports Country Club of Cincinnati is where the team has its roots. There, they provide full driver training, which is the focus of the operation – a full driver development program. The goal is to help develop each and every driver no matter the experience and age. At their local KRA program, they house over 20 drivers a weekend for the club races at New Castle Motorsports Park. The ambition was to take those ready to move up the karting ladder to the next step. Thus, Trinity is branching out to WKA Manufacturers Cup Series and SKUSA Pro Tour in 2017. This weekend, there are seven karts under the Trinity hauler, which impressed a lot of people around the paddock, and they anticipate the kart counts to grow as the season goes on. The Trinity package provides one of the best hospitality sections in the sport. They were also featured in a Daytona Beach New Journal article yesterday.

Trifecta of Karting at Daytona KartWeek 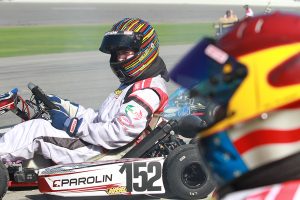 Two generations of the Russell family racing on the road race side (Photo: EKN)

One of the greatest aspects about the Daytona KartWeek experience is the three distinct and unique races that are part of the overall event. Of course, we are covering the Manufacturers Cup side of things, which is located inside turns 3-4 of the NASCAR track. On the other hand, the WKA National Road Race Series has been running the big track road course for over 40 years, where karts run anywhere from 50mph to 150mph. And, outside NASCAR 1-2, the Dirt Championships are taking place on the Daytona Flat Track. All three disciplines of our sport are on display at DIS this week. It’s truly a special outing each year.

Coming from the road racing community, I can spend hours talking with people in the paddock. This morning, I got a chance to see and speak with a number of individuals who I rarely get to see these days. A number of prominent names are competing there this weekend. Margay Racing’s own Keith Freber spends his one weekend of the year racing at Daytona. With Bushnell Motorsports Park’s Bret Spaude turning the wrenches, Freber is looking forward to earning another Daytona victory. On the sprint side, Greg Digness has the Margay tent under control. Last night, they hosted over 60 people at a dinner gathering, celebrating what was just a handful of people just two years ago. Margay was a dominant chassis of the Manufacturers Cup Series, and thanks to the growth of their program at the Gateway Kartplex and the Ignite/206 program across the country, the numbers are growing for the race team once again.

Also back at the big track is the Russell Karting Specialties operation. The Russell name has been in the sport dating back to its inception, with Jim Russell Jr. leading a trailer-full of karts that includes 206, TaG, shifter and Stock Honda equipment. Russell’s son James is making his first start in a laydown at Daytona. RKS has been a longtime supporter of the road racing side of the paddock, and they are looking to earn a number of victories here this weekend running their Parolin karts.

Another person making the transition from the sprint side to road racing is Patrick Olsen. This summer, Olsen got his first taste of a laydown kart at Blackhawk Farms Raceway in Illinois. He loved it so much, the former WKA Man Cup race winner has decided to hit the high banks of Daytona. The opening session was not favorable, forcing a switch in engines, however, he was able to complete his first full session.

Drivers in New Colors / Graduating to Next Level 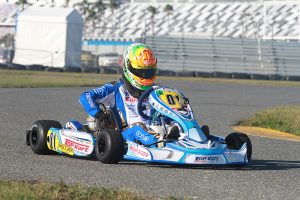 One of the biggest stories of the event is the move by EKN TaG Driver Rankings #1 driver Brandon Lemke to Top Kart. The longtime Merlin driver and 2016 USPKS champion is making his Top Kart debut at the WKA Daytona KartWeek event, racing under the AMK Race Products operation tent, the chassis dealer out of Minnesota. Today will be the first laps aboard a Top Kart for Lemke, as no prior testing was done before heading to Daytona. Lemke was offered the ride during the weeks following the SKUSA event in Las Vegas, and they are using this as a test to see what they want to do for the future. Lemke’s move has left a void at the Franklin Motorsports / Merlin operation. However, SKUSA Pro Tour Junior champion Alex Bertagnoli is moving up to Senior as his 15th birthday comes just days after the New Year.

Among the many others running new colors or new size karts are the Cadets from 2016 graduating to Junior in 2017. Tyler Maxson, Caleb Bacon and Kaden Wharff are some of the notables who we will see contend for Junior victories this event and the rest of the season.