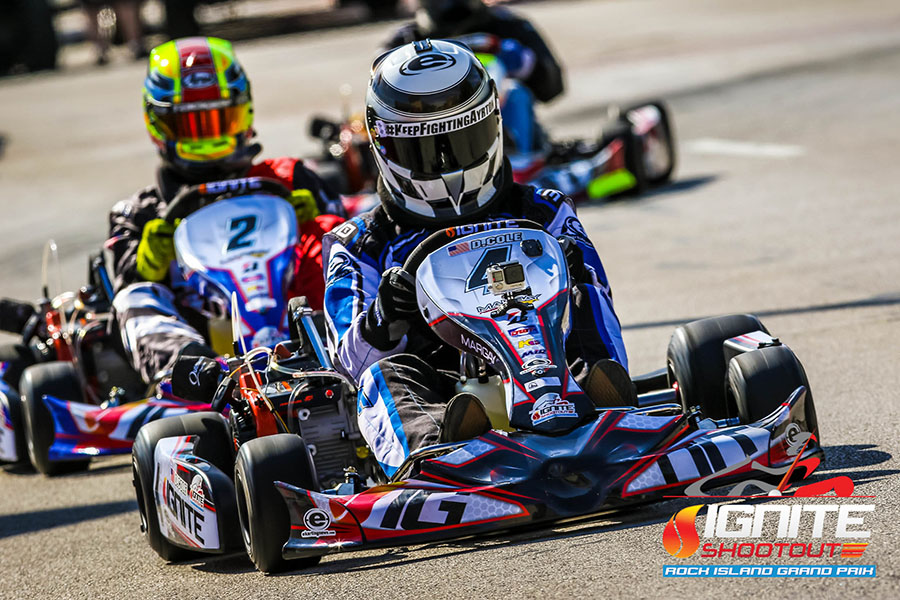 When you get kicked off the horse, you jump back on. That’s exactly what I did this past Labor Day weekend, having endured a disappointing 2015 edition of the Rock Island Grand Prix. Last year, thanks to all the hard work and effort by the crew at Margay Racing, I was able to start all four of my races that weekend, finishing just one due to an error of my own, a mechanical issue, and another personal error. It was possibly the most difficult weekend I’d had at the racetrack dating back to my first trip to WKA Daytona KartWeek Road Race in 1996. It was with shock and a strong sense of respect that Keith Freber and the Margay crew asked me back to race with them for the second edition of the Ignite Shootout during the annual street race.

This past September, I made my 13th straight trip to the Quad Cities to cover the Rock Island Grand Prix. For the fifth consecutive year, I would also compete in a Briggs & Stratton LO206 category as part of our EKN OnTrack program. The 2016 season was a bit slower for the OnTrack editorial compared to 2015, as we dealt with an extremely busy travel schedule throughout the year. The one event we can always count on to have the opportunity to get behind the wheel is the Rock Island Grand Prix. EKN is looking to build a stronger OnTrack segment for the website for 2017.

The second annual Ignite Shootout at the Rock Island Grand Prix was the target for our 2016 campaign. Last year’s adventure was originally scheduled for EKN Publisher Rob Howden, that is, until a rib injury kept him from competition. Racing in two different classes with the same kart was a challenge, and with Howden in New York taking car of his Mazda Road to Indy duties, I was left alone to manage the coverage and the racing for EKN and HMG. Much to the delight of the Margay wrenching crew, they were happy with the limited work that would be needed in my direction.

We arrived on Friday to find a much larger tent for Margay this year, as the Ignite Shootout expanded to 22 drivers in the Senior division while also welcoming six racers in the new Junior division. Everything was done first-class with plenty of pit space to work around the other competitors, and the tent included a lounge area to sit and relax or enjoy the lunches that were provided over the two days. The tent was filled with arrive-and-drive packages, along with a number of personal karts from the Gateway Kartplex facility outside St. Louis, which runs the Ignite class as part of their series. A brand new #4 Margay Ignite K3 machine was ready for me when we got to Rock Island, and aside from a few pedal adjustments, placement of the GoPro camera and the EKN stickers (worth at least a tenth of a second), we were ready for day one of action.

The Ignite class was eighth in the race order for the weekend, placing us as the 10th session to hit the track for the opening round of practice Saturday. The track, combined with the new Bridgestone YDS tires, was slick in the opening few laps. With more drivers in the class, the track was a little busy and very tough to get a clean lap. For me, it was the first time in a kart since the month of May, when I got in a quick little trip to my local track in Michigan – Ravenna Motor Park – for some LO206 racing. It was the only event I was able to record a score toward the Briggs Weekly Racing Series (finished 1458th overall). This is where running multiple classes at the RIGP helps. With each lap, you gain the confidence to go quicker and quicker in each corner. If you run one class, those two practice sessions are all you have. 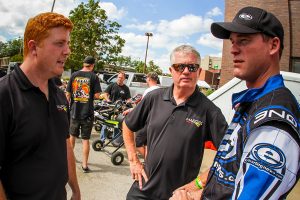 In the second practice, I was able to pick up the pace to see what the kart had in it. We had changed from the 19-62 gear ratio that came on the kart down to 19-60 to gain a little top-end. This was three teeth below what we ended up with at the end of the 2015 event, which speaks to the speed of the track this year. My goal was to get as low as possible to utilize the draft without hitting the rev-limiter. Yellow flags kept me from getting a clean lap, however, as I was avoiding wrecks around the six-turn circuit. With Race Monitor turned on for the practice sessions due to the late arrival of famed time keeper Tom Thelen, it was up to people you knew working the paddock and utilizing the old stopwatch to see who was fast. The quickest was Jeffrey Dolian – last year’s runner-up. He followed my lead and ran two classes, competing also in the Briggs 206 Medium category aboard his Margay Ignite K3 ride. The extra time and his hard work certainly made him the driver to beat going into the heat race.

The gearing seemed to work, and we knew that the race would have the draft come into play. Drawing the pole position in the pea-pick, I started P1 but fell down to P6 by the exit of turn one. The kart was a pig off the grid and did not take off very well. Once we completed the opening lap, I was into race mode, trying to regain as many spots as possible. A pass and a spin gave me two spots on lap two, and another driver tagging the barriers put me into third, right behind Trans Am driver Jordan Bernloehr. I had just worked past him for second when we came up on a yellow flag in turn one. The wreck involved leader Dolian, as he tangled with a lapped kart. This put me into the lead, but also created a very narrow gap in turn one with the inside barriers pushed into the apex, sending us about one kart width wider through the corner. During the closing laps, I made sure to take it easy to avoid making my own mistake. Unfortunately, Jordan took advantage on the final lap, getting a better run out of turn one to edge me heading into turn two. I was unable to retake the lead before the checkered, settling for the second spot.

With the format of the point structure for the heat race, including passing points and finishing position, I was placed fourth on the grid for the main event. It gave me the preferred outside line from the head-to-head LeMans-style start. We left the kart alone, aside from an adjustment for the air pressure, following the Sunday morning warm-up. My lap time was within a tenth of Bernloehr, putting us toward the top of the time sheet in the final prep session. That says a lot about the Margay Ignite K3 package. You can make it work right out of the box with very little adjustment.

Gridded fourth, I had an even worse start to begin the main event. My Briggs 206 engine just didn’t have the pull, due to the fact that my gearing was so low. Exiting turn 1, I was 10th and my timid attempt at a pass in Turn 2 kept me there, losing lots of ground to the lead group. With the help of Andrew Coulter giving my kart the push it needed to get the momentum going again, I worked my way up to sixth by lap five. That was where I remained until the checkered flag. The kart was over-stuck with all the rubber laid down around the streets from the previous seven main events. Combine that with the low gearing, and I was not able to get the full power out of the low horsepower Briggs 206 engine to match or better the lap times set by the leaders.

The victory went to Dolian as he was able to hold off Bernloehr and veteran Ken Williams. The end result for me was a positive-negative. An undamaged kart, no spare parts needed, no contact with any barriers and I was able to lead at the Rock Island Grand Prix once again – however – my decision to leave the gearing alone took me out of competition for the victory. That’s part of racing. We learn and move on, and keep fighting forward. 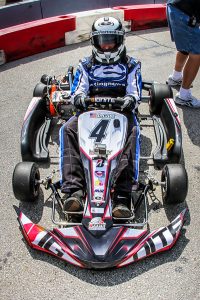 The good news is that I won’t have to face Dolian in 2017 as the class does not allow previous RIGP winners. The bad news is that there are going to be more contenders in the hunt this coming September. Bernloehr and Williams were great additions to the category in 2016, and I’m sure they both will be back in 2017. Add in the Scharfs and Nick Todtenhaupt, those looking to make a second or third start at Rock Island, in addition to talented newcomers, and the contenders list will continue to grow as we reach the Labor Day weekend in 2017.

I hope to be able to make a third start in the Margay Ignite Shootout this September. The experience racing under the Margay tent is first class all the way. Keith Freber and Greg Dingess make racing under the Margay banner an enjoyable experience. Their attention to detail makes the event go as smooth as can be for the driver and it’s always great to see the boss having a good time at the Travoltas. The crew they assembled to maintain and oversee the racers under the tent provide the best help and experience you can find anywhere in the karting industry. Margay is set for a big 2017 season, beginning with the upcoming WKA Daytona KartWeek taking part in the Bridgestone Manufacturers Cup Series event, including the four other events on the year. Watch for the Margay tent at the Gateway Kartplex facility, along with trips to tracks around the Midwest area promoting the Ignite program – in addition to select regional and national events.