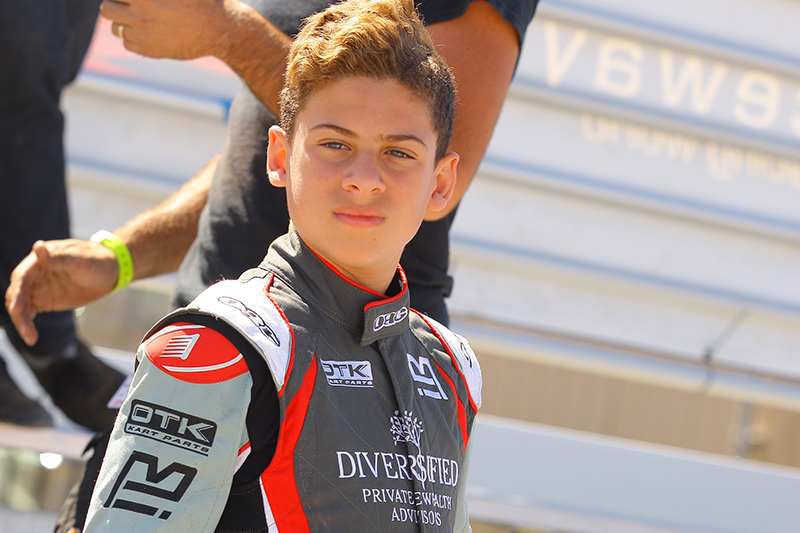 The 2016 season has been one for the books for junior driver Dylan Tavella. From his race wins across multiple series to becoming a national champion and representing Team USA at the Rotax MAX Challenge Grand Finals in Italy, Tavella has managed some impressive accomplishments in his second year in the junior category. Competing in a variety of competitive series on multiple engine platforms, including the Florida Winter Tour, Rotax US Open, United States Pro Kart Series (USPKS), and the SuperKarts! USA (SKUSA) Pro Tour, the young driver left 2016 with a stout resume, proving himself as one of the top junior drivers in the country.

Tavella began 2016 competing at the Florida Winter Tour and USPKS, claiming multiple wins in both series. Moving into the summer, he turned his attention to the Rotax US Open in Utah, claiming a second place finish after a tough battle for the win. The following month at the SKUSA SummerNationals in Indiana, Tavella set the pace for the field and took home back-to-back main event wins. Two weeks later, the Tony Kart driver showed that his game was better than ever as he claimed the Rotax Junior Grand Nationals win in Sonoma, California, becoming the Rotax Junior National Champion and earning his ticket and Team USA invite to the Rotax MAX Challenge Grand Finals.

After much testing and preparation, the young driver headed overseas in October with Team USA to the Rotax Grand Finals in Sarno, Italy. Despite his consistent driving and strong effort, Tavella faced adversity at the international event. Keeping his head held high, the New York resident came back to North America to finish his season running two events in Vegas, the US Open finale and the SKUSA SuperNats 20. Earning a fifth place finish at the US Open in Vegas, he pushed for an even better result at the SuperNationals. Determined to achieve this goal, Tavella landed himself on the second step of the podium and took home the silver to close out his excellent season.

“It was a great season and I am starting 2017 in a few weeks,” explained Tavella. “I will be competing at the World Karting Association Manufacturers Cup event in Daytona Beach between Christmas and New Years and will be gunning for the top step of the podium.”

The remainder of Tavella’s 2017 plans are currently in progress as he prepares to begin his season with the momentum gained in 2016. With the hopes to carry this season’s success into 2017, Dylan Tavella’s final schedule and season plans will be announced at a later date.