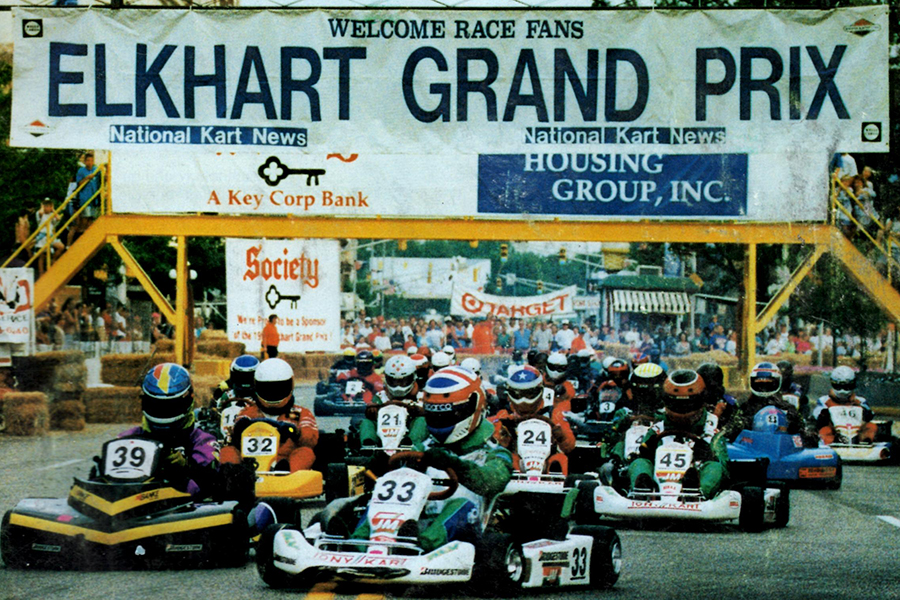 People new to the sport and the industry may have heard about the Elkhart Grand Prix, however, never were able to experience a revolution in the karting experience. In the days before Superkarts! USA SuperNationals, there were street races and temporary circuit events popping up all over North America. The Rock Island Grand Prix began in 1994, and the first temp circuit at the SuperNationals did not occur until 2002 at the Rio. Indiana is the unofficial home to street racing for karting, as the state continues to hold a number of events throughout the summer months. All of that began with the Elkhart Grand Prix. 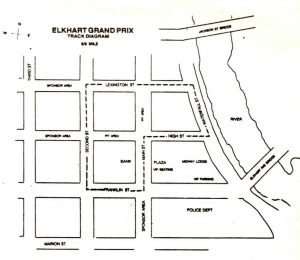 The first ever Elkhart Grand Prix took place in 1989, welcoming around 300 drivers and an estimated 18,000 spectators. From there, the event continued to grow with promoter and National Kart News owner Curt Paluzzi working directly with the city to create not just a karting event, but a festival for the city and the area. By 1991, it was well over 600 entries and over 40,000 spectators. Many activities surrounded the event outside the actual race, and in 1993 they brought in ESPN to cover the event. That same year, the event welcomed 853 entries with many of the categories comprised of A main, B main and C main races. 1995 was the last event held in Elkhart before the event was cancelled in 1996 due to pending litigation surrounding an incident.

After a 20 year absence, the event is reborn. Just days ago, Elkhart Mayer Tim Neese announced the return of the kart street race to the city in 2017. The Elkhart Riverwalk Grand Prix will be held August 11-13, featuring a new course in the downtown district of Riverwalk. The new program is in conjunction with USAC Karting around a new 6/10-mile course that includes two bridges across the Elkhart River and navigates around the NIBCO Water and Ice Park and Kardzhali Park.

“When I proposed the idea of bringing the kart races back to Elkhart, the enthusiastic response from the community was overwhelming,” Neese said. “Not only will the event have a large economic impact on the city, but it will also provide an activity that both residents and visitors can enjoy. We are working to make this event bigger and better than ever, and I look forward to the finished product.” 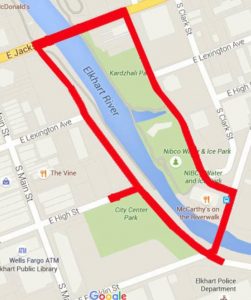 USAC Karting – who is among the players with the Indianapolis Motor Speedway to host a possible karting event inside the famous Brickyard facility – is the driving force from the industry helping to support the new Elkhart Riverwalk Grand Prix. The press release sent out regarding the Elkhart event stated the chance for 12-14 classes, allowing drivers of varying skill and speed levels to compete. The race format in addition to corporate sponsors will be finalized and announced at a later date.

“USAC Karting is excited to work with the city of Elkhart to bring this historic kart race back and make it a ‘must-attend’ event for both spectators and karters,” said USAC Karting Director Mike Burrell. “Street racing has always been a great way to promote karting and cities like Elkhart. It’s our hope racers and fans fill the restaurants and hotels around the county, have a great time racing, and a positive impact on the community.”

The date however falls on the same weekend as the Superkarts! USA SummerNationals at New Castle Motorsports Park, roughly two hours south in central Indiana. You can expect many of the grassroots divisions to be featured in Elkhart, including Briggs 206 and Yamaha in addition to some type of TaG and shifterkart groups for the high-speed enthusiasts.