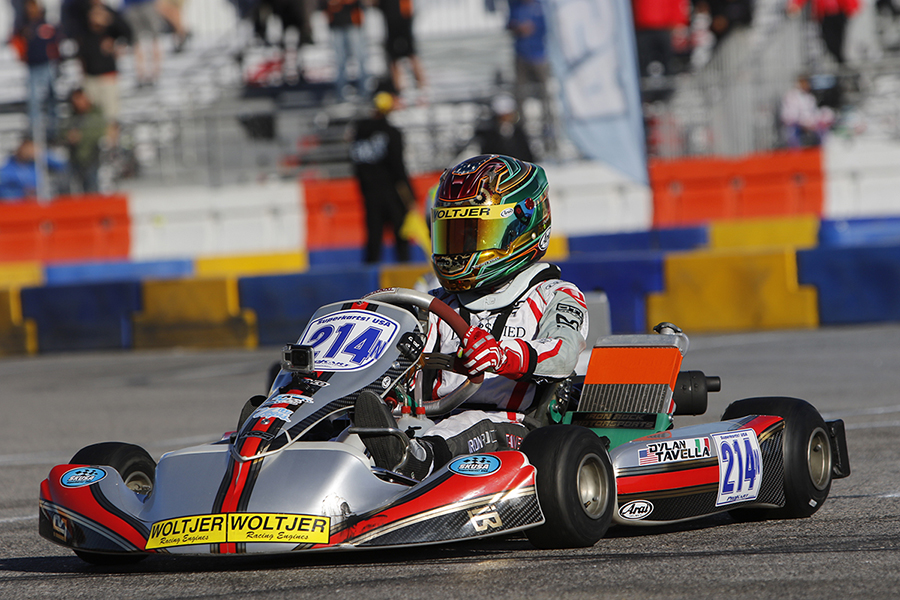 Dylan Tavella stands on the podium at the SKUSA SuperNationals
(Photo: www.OTP.ca)

Dylan Tavella capped off his 2016 season with a podium finish in the X30 Junior class at the annual SuperKarts! USA (SKUSA) SuperNationals 20 in Las Vegas, Nevada. Tavella was dissatisfied with his results at the US Open of Las Vegas a few weeks earlier and was looking for redemption at the final event of the year as he entered the temporary street circuit on the grounds of the Las Vegas Convention Center. A win is what he was looking for but to stand on the podium in a stout field of more than sixty drivers was a great way to close out his impressive 2016 season.

Tavella started off his SuperNats weekend on Thursday by qualifying sixth in the X30 Junior field. He continued to improve in the heat races on Friday, finishing fourth in heat one and taking the win in heat two. On Saturday, he posted a solid sixth place result in the final heat race. These consistent results gave him a fifth place starting position in the X30 Junior main event on Super Sunday.

In the final, Tavella battled in the top-five with many position changes throughout the race. When the checkered flags flew, the Tony Kart pilot crossed the line in the second position, earning himself a spot on the podium. With this great result, he was able to finish second in the championship standings, a phenomenal accomplishment for the young driver after missing the first two rounds of the SKUSA Pro Tour, the SpringNationals, in Phoenix earlier this season.

“I am very happy with our result at SuperNats,” explained Dylan Tavella. “Although we wanted the win, I know we battled hard all weekend and a second place finish is a great showing at the biggest event of the year. We have had such a great season, becoming the US Rotax Junior National Champion and driving with Team USA in Italy at Grand Finals, and this second place finish is icing on the cake. I would like to thank Charlie Swayne’s Iron Rock Raceway team, my driver coach and mechanic Mike Doty and Woltjer Racing Engines for working hard all weekend and getting me to the front to pull off this second place finish. I would also like to thank my family and everyone else who has been part of my success this season. I could not have done it without your help. We’re looking forward to 2017!”