A win, championship, and podium appearances for the Florida-based team 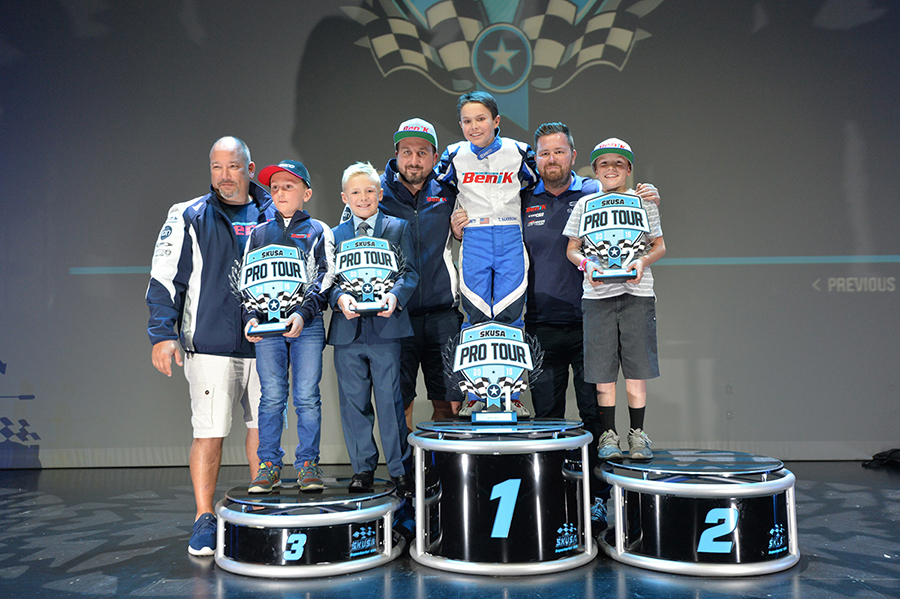 The BENIK team drivers came home successful from the final race of the 2016 season, the SuperKarts! USA (SKUSA) SuperNats 20 in Las Vegas, Nevada. The BENIK chassis was seen at the front of the field for most of the weekend, securing the pole position and winning heat races in two different classes. The team brought home a win, multiple podium appearances, a championship, and multiple vice-championships in Las Vegas, a great way to close out their impressive season.

The BENIK team set the tone early in Micro Swift by securing the top two spots in qualifying, with Freddie Slater taking the point and Vinicius Tessaro claiming the second position. The BENIK drivers were over four tenths faster than third place. In the final, Tessaro and Slater put BENIK on top once again, Tessaro taking the win and Slater following in second. BENIK karts dominated the front of the field with four drivers finishing in the top-six. Brandon Carr finished the season as vice-champion in the championship standings while teammate Elliot Cox joined him on the championship podium in the third spot.

In Mini Swift, four BENIK karts qualified in the top-six, including Santi Trisini who garnered the top spot. All six heat races were won by BENIK karts, making them a dominant force going into the final. In the final, Joseph Taylor battled for the lead all race long and led the field with one lap to go but when the checkered flew, he would cross the line in the second position. BENIK drivers dominated the top-ten, securing the fourth through seventh positions. Tyler Maxson took home the series title, with teammate Diego La Roque becoming vice-champion. The BENIK team has won back-to-back championships and vice-championships in the Mini Swift division, confirming that they are a dominant force going into 2017.

In X30 Junior, BENIK driver Derek Carmenate ran consistently in the top-ten in his junior debut. He had the speed to be in podium contention, but an unfortunate crash in one of the heats took him out of the running for a podium appearance. Teammate Jonny Edgar suffered a mechanical issue in qualifying, forcing him to start at the back of the field in every heat race. Unfortunately, this took him out of the championship, but he still drove hard, passing over 60 karts in three heat races.

“I am very impressed with our results for SuperNats 20,” stated Nick Mitchell, Team Manager. “To be consistently at the front all weekend in the most competitive fields of the season was a great success for our team. We did a lot of preparation for this event and it paid off. All of our drivers did great this weekend, earning wins, podiums, and championships. I want to say thank you to our drivers for working hard all season, their families for supporting them and the team, and all of our partners for their support as well. We could not have been so successful this season without all of you. We cannot wait to see what 2017 brings us!”

For more information on BENIK Kart, please contact Nick Mitchell or Ben Cruttenden via e-mail to Info@Benik-Kart.com or by phone at 754.206.4870.