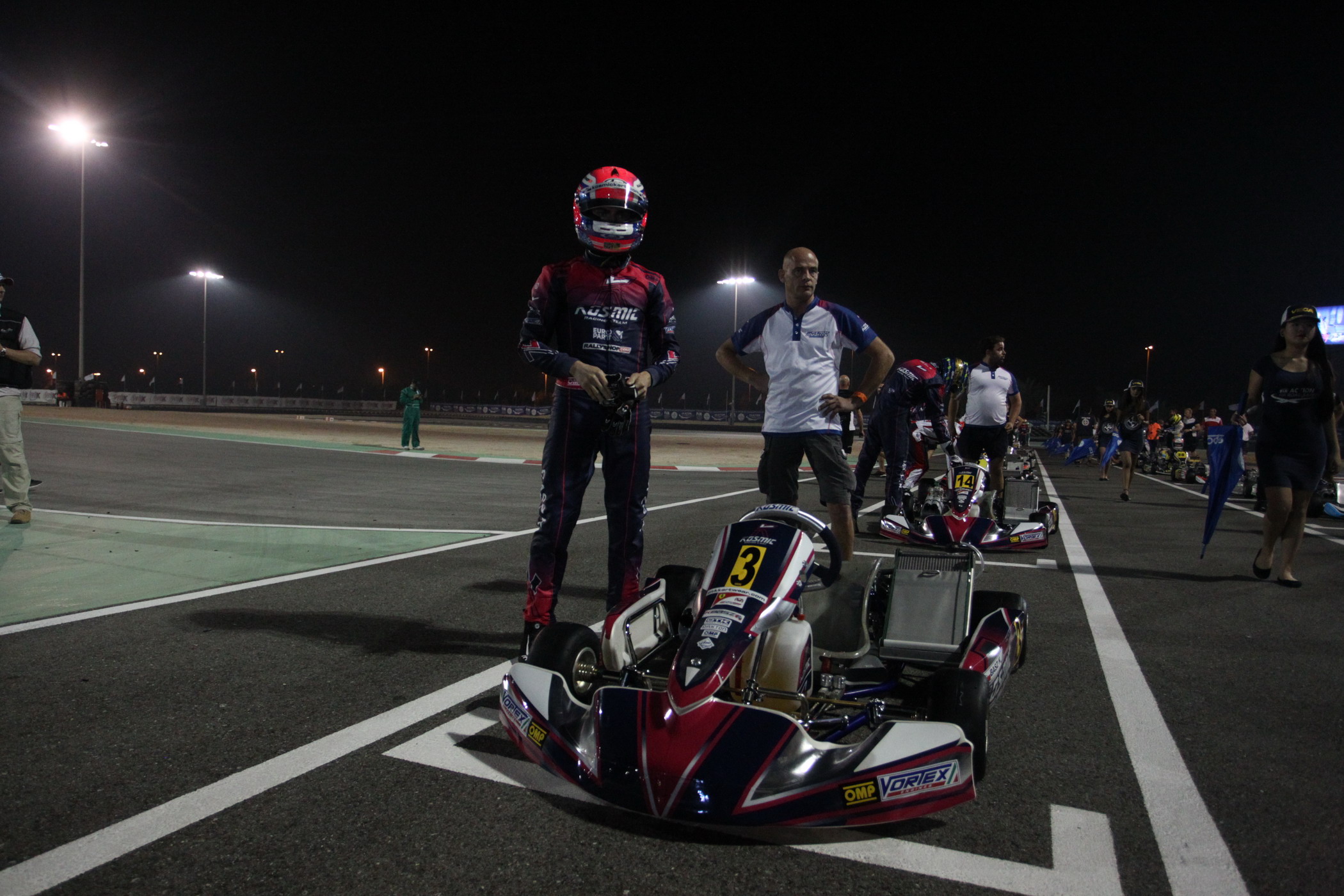 The Bahrain International Kart Circuit saw the “Blue” Kosmic Kart the protagonist of the CIK-FIA World Championship. The Kosmic Kart brand ends the most important race of the season, the World Championship successfully, with great satisfaction for the world title conquered in OKJ class by Victor Martins with the VDK Racing team. Our Racing Department defended with honor the 2016 title and fought for the victory in OK category with Karol Basz, who finished second. But in the Bahrain weekend of the spotlights (not only those of artificial lights) shone on two of our young drivers, Noah Milell and the formidable emerging Théo Pourchaire. Milell scored the second fastest time in OK qualifying and Pourchaire got on the third step of the podium of the World Championship in OKJ with merit.

In qualifying, as mentioned, Milell was soon the shining star, author of a time that allowed him to always start on the front row in the heats. Milell has also won a heat; even better did the more experienced Basz, winning twice and first position at the end of the qualifying heats. Excellent ninth place in this stage gained by Thomas Michael Bale, debuting with our official colors. Basz and Milell in the prefinal 1 have confirmed to be the real protagonists until the last, taking the second and third place, respectively. The final has been as exciting as disappointing for us, because Karol had the technical and competitive potential to aim for his second world championship. Unfortunately, in a tight battle for success, with continuous overtaking over his rivals Hiltbrand (winner), Tiene and Tonteri, our Basz failed to keep the heels of the leader in the final sprint, and so we had to settle for the second place, which result rewards all the work done by the Racing Department staff. Noah Milell finished the final in seventh place, signing the best lap of the race (50.189) and Ulysse De Pauw, in his debut in OK category, finished in the top ten list, completing the trio of the Racing Department drivers in the first ten positions. In the final, on their first world championship experience, they performed well even Thomas Michael Bale and Jonathan Hoggard. We remind that the latter competed for the World Championship as winner of the prestigious British Karting Championship, which Vortex is the only engine supplier. So, just thanks to Vortex Jonathan Hoggard, BKC Champion, was entitled for the assignment of such an important prize.

The podium of Théo Pourchaire arrived after our promising young driver has run all weekend on the Bahrain International Circuit as a protagonist. Théo made the most of the third position obtained in qualifying and won two heats, finishing seventh overall. Supported by technical material of the highest level, our driver jumped from the fourth row of the final grid and was immediately entered the group of drivers competing for the leadership. Pourchaire, shortly after the middle of the race, also took the second position, but he was soon overtaken on the finish by David Vidales. The checkered flag has confirmed the third place of our driver, a result that rewards the Racing Department staff for its work aimed to the growth of this, and other, young talents. The world podium of the junior class was particularly satisfying for our brand, with two Kosmic Kart chassis on the championship podium, the first of which, with Victor Martins (VDK Racing) gained the World Champion title in OKJ class. Media Release Date: 20.11.2016 Press release: #35 OTK M&C Charles Weerts, the other driver of ours who reached the final, unfortunately withdrew during the first lap due to a slight collision.