The Kings of Karting Crowned in Sakhir 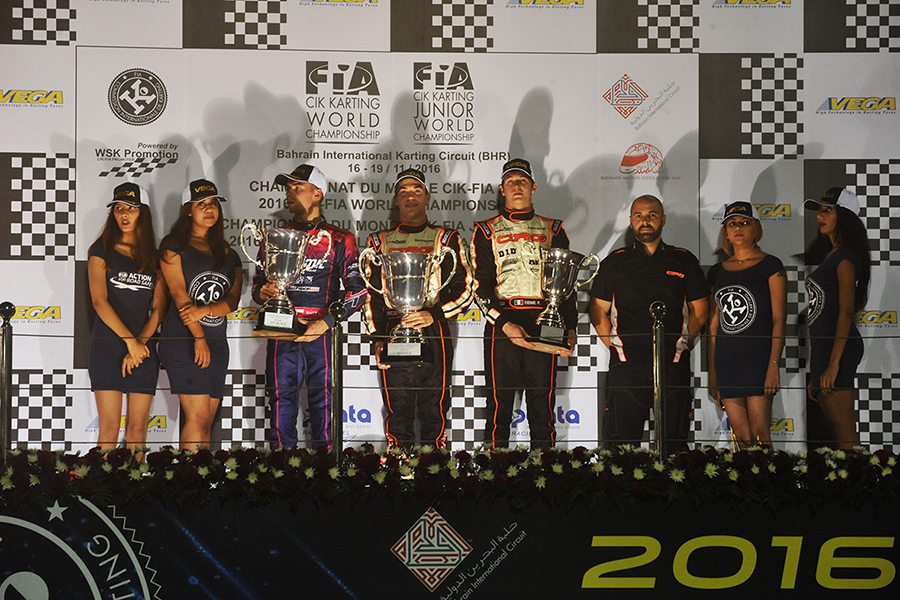 The event by night in Sakhir was as fascinating as predicted. At the Bahrain International Circuit, the World CIK-FIA Championship of Karting offered the exciting races everybody expected after the superb preliminary phase of the past days: from the heats to the Pre-finals and, then, to the Finals the night of the Arabian Gulf finally saluted the new World Champions of the OK and OK Junior categories. They are the Spanish Pedro Hiltbrand (CRG-Parilla-Vega) for the OK and the French Victor Martins (Kosmic-Parilla-Vega) for the OK Junior. For both of them, the victory had the sweet taste of the great conquest given the unpredictability of the Finals.

A World Championship to be watched again on video

After the live steaming on the Internet, the specialty channel Motors TV will broadcast the TV report which will end the media offering of the CIK-FIA events. The recap of the whole event in the Middle-East is scheduled, as usual, in the week following the event.

Hiltbrand is the new World Champion in OK

Just like a Spanish conquistador: Pedro Hiltbrand (#1 in the photo above) had already won the most important titles of the season, therefore the assault to the World Championship of the driver from Girona couldn’t but be incisive. The Polish Karol Basz (Kosmic-Vortex-Vega), as reigning Champion, was – as expected – his toughest rival. The duel between the two frontrunners was gripping: they exchanged positions several times in their battle for the leadership of the Final. Basz, second in Pre-final 1 behind the Russian Alexander Smolyar (Tony Kart-Vortex), had a good start and tried immediately to threaten the leadership of Hiltbrand. The Spaniard, winner of the Pre-final 2, gained an early lead starting from the front row. Soon after also the Finnish Paavo Tonteri (CRG-Parilla) and the Danish Christian Lundgaard (Ricciardo-Parilla) joined the battle for the podium positions. The last, vibrant phases of the race saw Lundgaard pulling over with three laps remaining and the great recovery of the Italian Felice Tiene (CRG-Parilla) who, after a start from the 20th slot of the grid, managed to close the gap and to challenge Tonteri for the third place. During the last laps, Hiltbrand attacked successfully Basz, who was leading the race. The Spaniard passed the Polish from the inside and Basz was even obliged to fend off the attacks of the pursuers to keep his second place. Eventually, Tiene managed to score the third position. On top, the podium with Hiltbrand, Basz and Tiene.

Victor Martins (Kosmic-Parilla-Vega) was eager to be the season top driver of the OK Junior and he definitely made the grade in Sakhir. After being one of the frontrunners for the European title until the last race, the French driver (on the podium in the photo above, together with Vidales and Pourchaire) this time managed to get the World Championship winning a heated Final with many drivers battling for victory until the end. Martins started from the front row together with the Spanish David Vidales (Tony Kart-Vortex): they were the winners of the Pre-final 1 and 2. The French gained the lead soon, but his attempt to pull away was foiled by the attacks of Vidales. The Spaniard kept the head of the race for little time before Martins took over. Also the French Theo Pourchaire (Kosmic-Vortex) and the Brazilian Gianluca De Castro (CRG-Parilla) took part in the battle for the leadership; they gained the positions behind Martins when Vidales dropped back. The Castilian, anyway, managed to recover immediately and to regain the second position, even though he did not succeed in his attempt to close the gap with the leader. So, Martins is the new World Champion followed on the podium by Vidales and by a good Pourchaire.