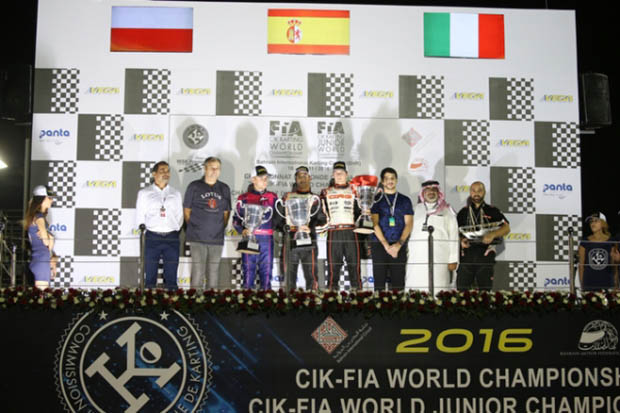 Pedro Hiltbrand secured the title of OK World Champion on CRG-Parilla, as five CRG drivers finished in the top six. Felice Tiene third after winning Prefinal. The Brazilian Gianluca Petecof was the best of CRG lot in OK Junior, ending close to the podium.

CRG has secured another stunning and crushing victory also in Bahrain’s World Championship, icing on the cake of the great results scored in this season. The International Circuit of Bahrain has seen the Spanish driver Pedro Hiltbrand taking the world title of category OK at the end of an exceptional weekend. Felice Tiene got on the third step of the podium, after dominating Prefinal. Both drivers competed on CRG-Parilla.

Pedro Hiltbrand obtained his third personal CIK-FIA title of the year with CRG. This result comes after the victory at the International Super Cup KZ2 in Sweden on CRG-Maxter, and that at the European OK Championship, on CRG-Parilla.

CRG closed a golden season on a high, after the victories at the KZ World Championship in Sweden with Paolo De Conto on CRG-Tm, and that scored by Fabian Federer at the KZ2 European Championship on CRG-Modena run by Team SRP.

The double appointment of the World Championship for categories OK and OK Junior held at the International Circuit of Bahrain has seen CRG flag waving high again, as the drivers of the Italian outfit have been protagonists throughout the weekend with a crescendo of results. In OK, Pedro Hiltbrand claimed the victory at the end of an exciting duel with the exiting world champion from Poland Baisz.

Felice Tiene also put in a spectacular comeback, winning the Prefinal from team mates Hilbrand, Hannes Janker and Paavo Tonteri, but was later on handed a 10s time penalty due to an incident with Leonardo Lorandi. Started from P20, Tiene completed an absolutely amazing comeback Final that saw him climbing all the way up to the third step of the podium.

The competitiveness of CRG material was also highlighted by the three CRG drivers closing their effort right behind Tiene: the Finn Paavo Tonteri and the German Hannes Janker, both on CRG-Parilla proceeded in fact the British driver Tom Joyner on Zanardi-Parilla, making 5 CRG drivers in the top 6.

GIANLUCA PETECOF MISSING OUT ON THE OK-JUNIOR PODIUM

OK Junior’s Final has been quite exciting too. The young Brazilian Gianluca Petecof has shown a great competitiveness on CRG-Parilla: his motivation and speed kept him constantly in the leading group. He would have certainly deserved the podium, but despite holding several times P2 and P3, he crossed the finish line with a good fifth place at the end of a red-hot closing lap. Some other CRG drivers ended up being among the quickest of OK Junior: the French Adam Eteki and the Spanish driver Kilian Meyer ended respectively 10th and 12th, while the Norwegian Dennis Hauger had to settle for P17 this time around, due to a race contact. The Belgian-German O’neill Muth retired after shining in qualifying and heats instead.

The Argentine Luca Longhi, Esteban Muth, the Italians Matteo Nannini and Mattia Michelotto, and the German Valentino Fritsch could not get past Prefinals, mainly due to some incidents.

Junior’s CRG squad in Bahrain was completed by the Dutch driver of CRG Keijzer Racing Team Kas Haverkort, the Japanese Shion Tsujimoto, the Czech Dan Skocdopole and the German of CRG Holland Phil Hill, but these drivers could not qualify for the final stages.

Dino Chiesa, Team Principal CRG: “We always hope to get more, but it is difficult – if not impossible – to improve on what we have done this year. This weekend we won the OK World Championship with Pedro Hiltbrand, a result that followed the victory of the KZ World Championship with Paolo De Conto, and that of the KZ2 International Super Cup and OK European Championship again with Hiltbrand. Everything clicked also in Bahrain. We only regret not taking the podium in Junior with Petecof, but several contacts happened at the last lap. We have been competitive both in OK and OK Junior. We bring home another World Championship and we are happy for this. We achieved a great result in OK, as five of our drivers completed within the top six. In OK Junior we lined up young drivers that paid fee of their inexperience, but we have always been very quick. Our drivers have been performing well, and 70% of our squad made it to the Final. We just missed out on the victory or podium in Junior, but we certainly displayed our competitiveness also in this category. We repeated the victory scored by Tom Joyner in Barhain back in 2013. We certainly have to thank Iame, our engine supplier that supported us very well throughout the year. We are now going to say good bye to some drivers, but this is part of the sport. We will keep going on, ready to get some more satisfaction.”

Pedro Hiltbrand, category OK: “It’s the best year of my life. I will never forget it as I almost won everything. I am extremely happy and I want to thank the whole team and my mechanic. One needs a great team at his back to win a World Championship and I had exactly this. In Bahrain I managed to score a result that rewards my work at CRG, and this has been the best possible way to end the season.”

Felice Tiene, categoria OK: “Everything was perfect and I could have played my chances for the victory of the World Championship –- had I not been penalized after the victory in the Prefinal. I felt physically and mentally fit and I got to this event motivated to get the job done. After winning the Prefinal I could have started the Final from the front row, but I was stripped from this opportunity. I am really disappointed, because I absolutely feel not to be blamed for the incident with Lorandi. Performance-wise we were very quick, both in terms of chassis and engine. The third place is not that bad in the end, but I really wanted to win.”